You might not have thought about it, but one of the biggest problems with compact fluorescent lamps (CFLs) is that unlike incandescent light bulbs, they just don't lend themselves to symbolic use as a metaphor for innovation. In fact, creativity expert and author of A Whack on the Side of the Head: How You Can Be More Creative Richard von Oech even offered a death notice for the light bulb's role in communicating new ideas:

Today, I'm announcing the death of a long time metaphor for creativity and innovation: the light bulb.

If you think about it, it's really quite amazing that a 125-year-old invention has had such longevity as a symbol for fresh thinking.

Imagine, for example, if the Long Play (LP) phonograph album (the 33 RPM version popularized in the 1950s) had become the metaphor for "new ideas." It would have been laughed out of existence no later than the early 1980s.

This hit home to me in a recent conversation I had with an art director with one of my publishers. We were reviewing cover mock-ups for one of my upcoming projects. One of them had a light bulb — symbolizing a "new idea."

I told her: "We can't use the light bulb for two reasons. First, it's a very, very, very old metaphor for a new idea. And second, the environmentalists are going to vilify the incandescent light bulb in coming years."

So long, trusty innovation metaphor. You served well! But it's time to find something new.

It's taken over three years since Roger first recognized the need for a new symbol for new ideas, but finally, Belarus-based industrial design firm Solovyovdesign rose to the occasion by re-imagining the original concept (via Core77): 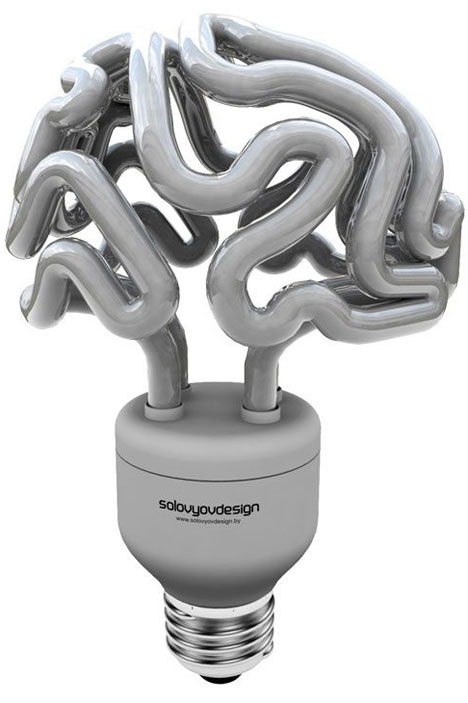 If only CFL's themselves were as bright an idea as the illuminating and money-saving answer that they've been made out to be....