Political Calculations
Unexpectedly Intriguing!
09 March 2011
The Minimum Wage and Job Loss from 2006 through 2010

In 2006, the last full year in which the U.S. federal minimum wage was a constant value throughout the whole year, at least before 2010, approximately 6,595,383 individuals in the United States earned $7.25 per hour1 or less.

For 2010, the first full year in which the U.S. federal minimum wage was a constant value through the year since 2006, the U.S. Bureau of Labor Statistics estimates that an average of just 4,361,000 individuals in the United States earned the same equivalent of the current prevailing federal minimum wage of $7.25 or less throughout the year. 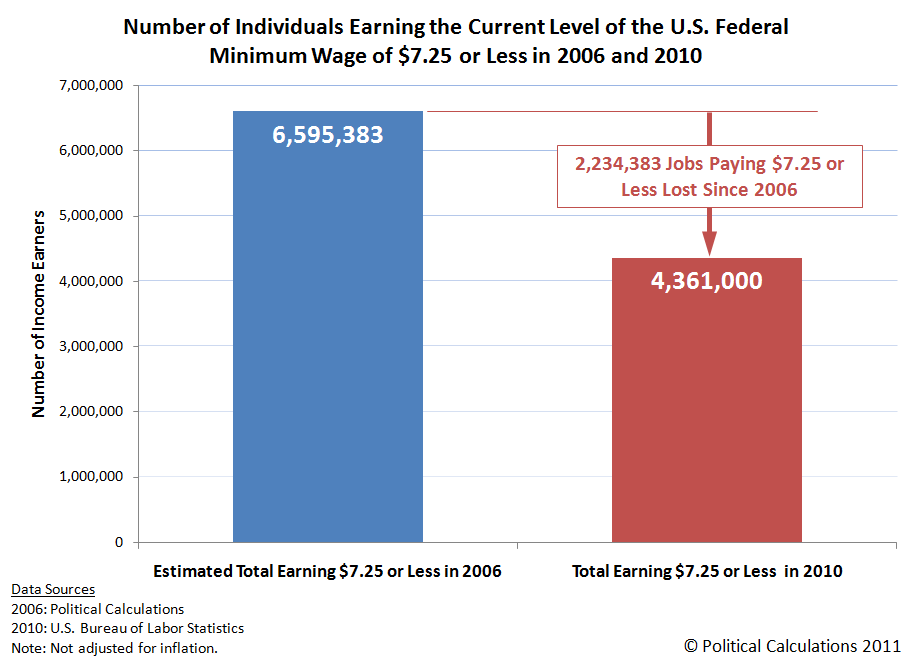 In terms of jobs lost, that means that 2,234,383 of the jobs lost in the U.S. economy since 2006 have been jobs that were directly impacted by the series of minimum wage increases that were mandated by the federal government in 2007, 2008 and 2009.

1 We had originally identified the minimum wage as $7.85, which we've corrected on the chart (the original is here.) We've also made a number of clarifications and other minor numerical corrections, which we've identified in boldface type - our apologies for the errors in the original post!