How much is the minimum wage at fault?

Let's see what we can see, shall we? First, let's look at the nominal and inflation-adjusted level of the U.S. federal minimum wage from 2006 through 2010, because that will give us a sense of how steep the minimum wage increases that took place over that time were in real terms: 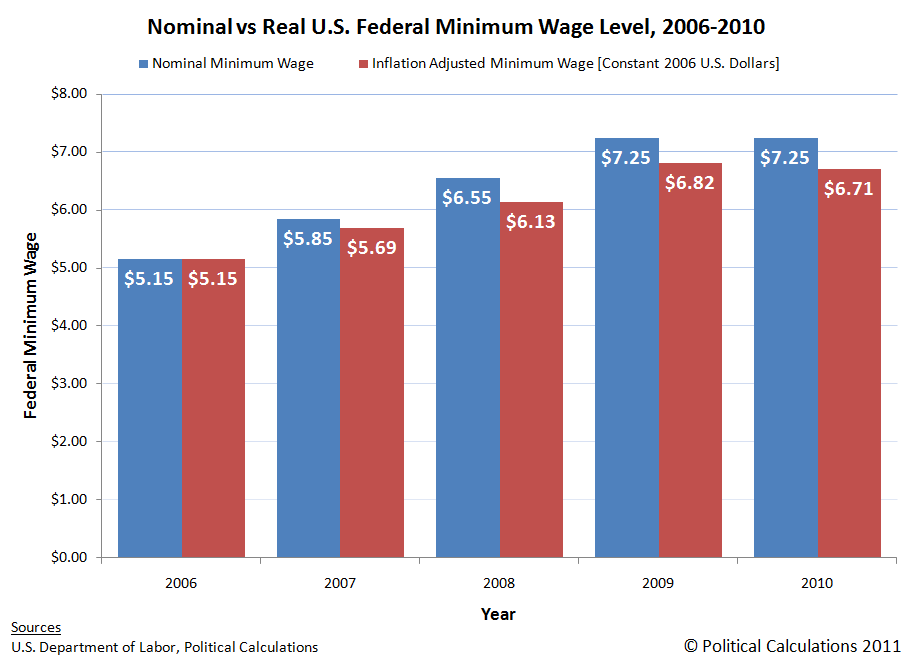 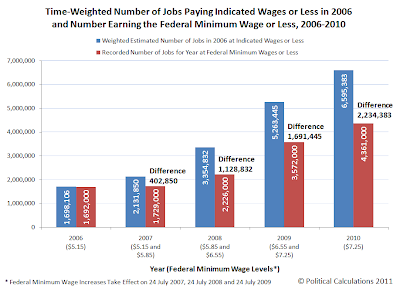 But wait! Just looking at these figures is ignoring the elephant in the room isn't it? After all, there was an economic recession that, according to the National Bureau of Economic Research, ran from December 2007 through June 2009. And then, the federal minimum wage increases that took place in 2007, 2008 and 2009 actually took place in the month of July in each of those years, so looking at full-year figures like these might not tell the whole story.

But perhaps if we look at the number of employed teens over that time, perhaps we can see something more. After all, in just looking at 2010's data, while teens account for an average of 3.15% of the entire U.S. workforce employed during the year, they never-the-less represent 22.8% of all individuals counted as earning 2010's federal minimum wage of $7.25 or less. And as it happens, those same minimum wage earning teens account for 22.7% of the average number of all the teens who were counted as being employed during that year!

So the employment trend for teens, perhaps more than any other demographic group as they represent more than one-fifth of all minimum wage earners, can help us isolate the effects of changes in the federal minimum wage on the employment situation in the U.S. That's especially true for recent years, given that teens were not employed in any significant numbers in the banking, finance, construction and manufacturing sectors of the economy, which were the hardest hit sectors of the U.S. economy during the recession. 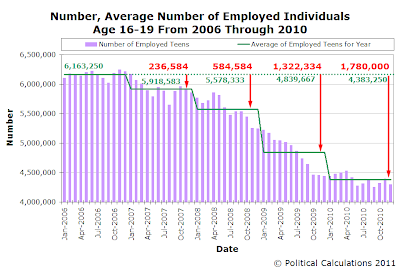 For 2006, we see that the teen employment level is fairly flat aside from what we would describe as a typical level of noise in the data, which is what we would expect in a growing economy in the absence of minimum wage increases. We see that compared to 2006, when an average of 6,163,250 teens were employed throughout that year, the number of employed teens has dropped in each year since. We find that the number of employed teens dropped by an average of 236,584 in 2007, the last full year prior to the beginning of the recession, which is remarkable given that the U.S. economy generally grew throughout the year.

That still leaves out the effect of the recession. Our next chart tracks the month-to-month change in the number of teens since their total employment level peaked in November 2006 as a percentage of that peak employment level, along with the employment trend for those Age 20 and over, as well as all members of the U.S. civilian labor force.

But wait, that's not all! We've also indicated important milestones for the most recent series of minimum wage increases, and identified periods of deflation, as determined by the 3-month percent change in the Consumer Price Index for All Urban Consumers for the current series, which can act to effectively increase the relative level of the federal minimum wage, making it a greater burden upon employers.

In other words, it's about as jam-packed with data as we can make it. Here it is: 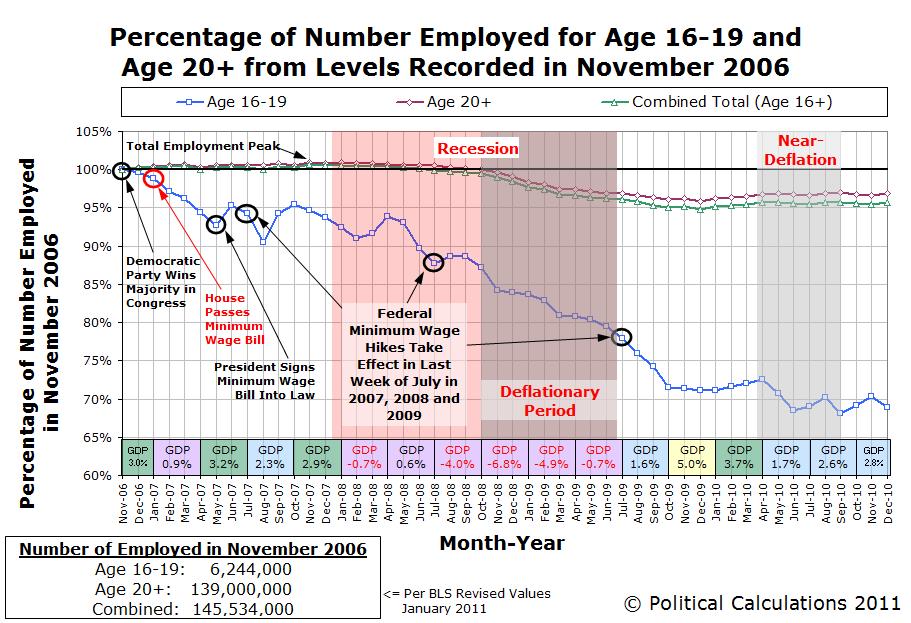 Finally, we observe that the teen employment level, which is clearly very sensitive to the minimum wage level given the high percentage of teens who earn it, would seem to be only modestly affected by whether or not GDP is generally rising (2007, July 2009 - December 2010) or falling (January 2008 to June 2009), as the state of the U.S. economy would appear to be in the back seat in considering what's driving teen employment levels.

We therefore find that the answer to Tyler's question is "pretty much."

Update 27 March 2011: We updated the second chart in this post to incorporate time-weighted employment numbers - the previous version only showed the equivalent number of jobs in 2006 at the higher minimum wage that applied for the indicated year. The original version of the chart is available here.