What is the stupidest thing that the U.S. federal government spent money on last year? 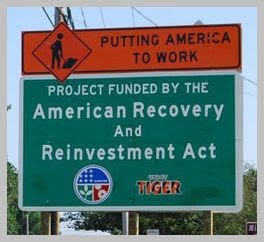 You don't have to be particularly partisan to realize that the potential list of really stupid things that the government spent money on last year is pretty long. After all, common sense alone should tell you that a not-so-small part of the $3,720,701,000,000 that the federal government projected it would spend in 2010 went to things that, on first glance, after a second look and even after a really long, detailed cost-benefit analysis, could have been spent more smartly.

Or perhaps even better, money that the government could have chosen to not spend at all! (We know, if only our elected officials would realize that's an option!...)

But how do we pick which federal spending line item was the most stupid thing for the federal government to spend money on in 2010?

We started by looking at things that the federal government spent money on in the last year that, by all objective standards, failed to achieve their stated goals. Namely, we looked at things that were part of the American Recovery and Reinvestment Act of 2009, aka "The Stimulus Bill", aka "The Stimulus Package", which was intended to create permanent jobs in both 2009 and 2010, and which is widely recognized by the public to have failed.

We then looked at spending line items whose cost exceeded at least $31,000, which we'll use as a reference point for all these stupid spending projects.

So which part of the 2009 Stimulus Package was the stupidest thing that the federal government funded in 2010?

In our opinion, it was perhaps a little construction project we'll call "The Sidewalk to Nowhere".

This federal government-funded construction project only cost U.S. taxpayers $89,298, but somehow managed to neither create any permanent jobs nor did it provide any meaningful benefits for the citizens of the community it served!

That community is Boynton, Oklahoma, where the federal government funded a project to replace a quarter-mile long sidewalk that had itself just been replaced five years earlier. The fully repaved stretch of sidewalk would then fully comply with the federal sidewalk guidelines dictated by the Americans with Disabilities Act (ADA).

But don't take our word for it. Here are the before and after pictures of the project, which clearly shows the magnitude of the federal government's achievement in bringing the full quarter-mile length of the sidewalk into full compliance with the ADA:

Now, aside from the idea that the federal government apparently has specifically dedicated funding and personnel for the purpose of developing design and construction guidelines for sidewalks, which itself means that there's probably a federal sidewalk inspector on the federal payroll to enforce them, the $89,298 that was spent on this specific boondoggle could have spared the equivalent of nearly three American households from being excessively burdened by mindless federal spending, but that weren't.

That may not seem like much money, at least until you consider the possibility that one of those three households could have been yours. 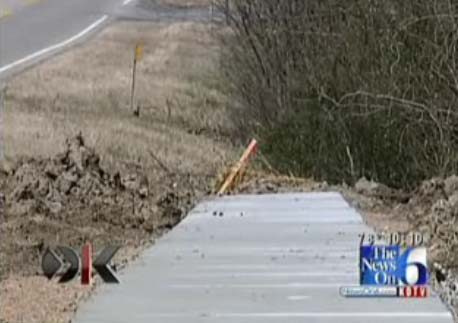 Perhaps this is the previously missing feature that now makes the sidewalk fully comply with the federal Americans with Disabilities Act. Thanks to your tax dollars at work, the disabled can now much more easily access the ditch at the end of the "Sidewalk to Nowhere" in Boynton, Oklahoma, where many citizens really can't believe that someone actually made a federal case out of repaving one of their sidewalks to specifically provide this kind of unparalleled access for the disabled to what is perhaps the town's least well-known natural amenity.

No, we can't make these things up. Except maybe the part about the federal sidewalk inspector. We really don't know if there is one or not!...