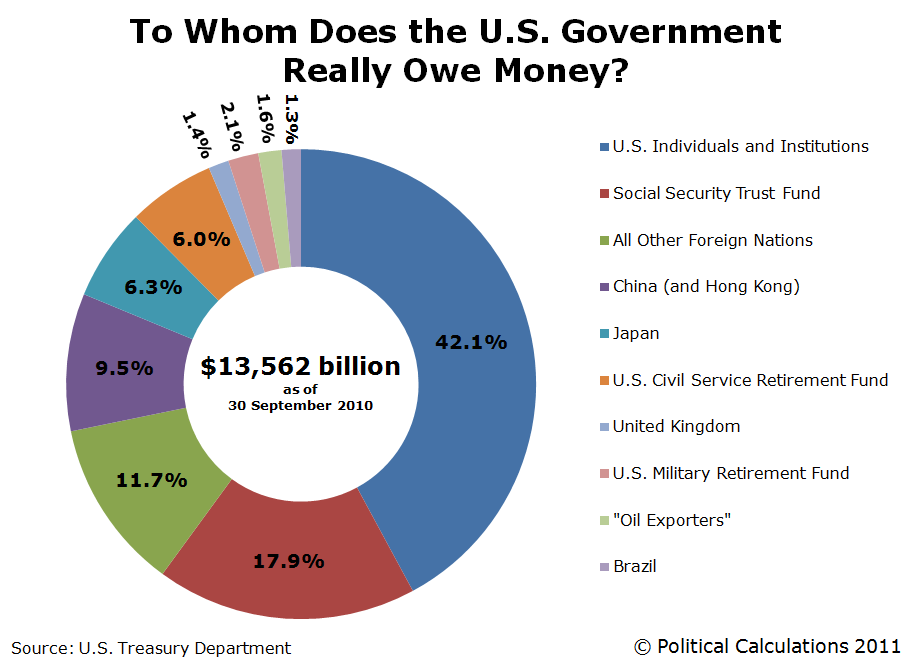 The main differences from the chart we previously featured are that China's holdings are much greater, while the United Kingdom's holdings are much smaller, which is a result of a number of Chinese institutions using banks in the United Kingdom as intermediaries for purchasing and holding U.S. government-issued debt. As a result, China's real U.S. debt holdings now account for 9.5% of the entire U.S. national debt outstanding (nearly 1 out of every 10 dollars the U.S. government has borrowed), instead of the 7.5% that was previously recorded.

Meanwhile, the U.K.'s recorded holdings have shrunk by a corresponding 2.0% of the entire U.S. national debt as a result of this accounting adjustment.

Finally, one question that came up after our original post was "How much of the national debt held by U.S. individuals and institutions is owned by the U.S. Federal Reserve?"

We found that as of September 29, 2010, the Federal Reserve held 966 billion dollars of the U.S. national debt in the form of U.S. Treasury Securities or Federal Agency Debt Securities, which represents 16.9% of all U.S. individual or institutional debt holdings, or approximately 7.1% of the total national debt.

So when it comes to who owns the U.S. national debt, the U.S. Federal Reserve owns less than China does....