Can a nation become a banana republic if it grows no bananas?

Well, let's look at Wikipedia's description of the four factors which make a country a banana republic.

Summarizing George's presentation, the four factors that indicate whether a nation has become a banana republic are:

Let's start by looking just at what the International Monetary Fund is seeing in considering the first item of this checklist, to see if it's worth continuing the analysis. Here, the IMF released a report in April 2011, Durable Financial Stability: Getting There from Here; Global Financial Stability Report. Here's Table 1.1 from the report, which shows the indebtedness of several major advanced world economies: The top row of the chart shows the percentage of each nation's government gross debt for 2011 as a percentage of its 2010 GDP. Looking at just the United States, the country's gross government debt in 2008 was 69.8% of its GDP, which has risen for 2011 to be equal to 100% of its GDP, putting it into the IMF's red zone. We should note that this is "socialized" debt, or rather, debt whose burden for repaying has been spread over all of the nation's society.

Next, scan down to the row for "Bank leverage". Here, bank leverage refers to the banks' asset to equity ratio, which for a bank, indicates the extent of the financial risk to which it is exposed. A high ratio, which the IMF sets at 25 to be in its red zone, indicates that the nation's banks are vulnerable to financial shocks, which puts the banks themselves at risk of failure.

The dramatic swings in these figures is where the banks exposure to the risk of losses has been transferred to U.S. taxpayers, which occurred in the series of bailouts that began in 2008 and continue through this day. The banks are now in the profitable green zone, while their losses and debts have been fully socialized, in that they've been transferred to U.S. taxpayers. 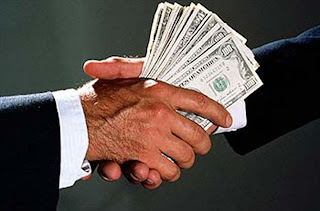 We must therefore conclude that the U.S. has indeed crossed the first line toward becoming a banana republic. It's almost a classic case of crony capitalism at work, which is currently continuing to corrupt the character and condition of the country's economy.

We should recognize that the U.S. is clearly not alone in this situation. If we look at the nations that are in the "green zone" on the bank leverage line and that are in the red zone in the top line for government gross debt, what we are seeing are the nations whose banks were successful in their attempts to shift their exposure to risk and losses to their governments, while they have been made "healthy" and profitable as a result. Meanwhile, nations with lower gross debt levels and higher bank leverage ratios are those who have not succumbed to the demand of their banks to be relieved of their losses.

We should also recognize that it's not just U.S. banks that are benefiting from this kind of special privilege with today's politicians and government bureaucrats. Labor Unions like the UAW have benefited from other bailouts, while companies like General Electric have become dependent upon their crony ties to the current administration. It should come as no surprise that both are continuing to milk their government connections for all they're worth.

Meanwhile, the Obama administration's consistent role in supporting what might best be described as today's open political corruption market is pretty remarkable!

As for the rest of the items on the list, Washington makes a pretty strong case that all four factors apply in the U.S. today (do read the whole thing).