Last week, President Barack Obama' proposal on long-term deficits demands spending cuts and tax increases in 2014, if the federal government does not reach its debt-cutting targets.

"If, by 2014, our debt is not projected to fall as a share of the economy -- if we haven't hit our targets, if Congress has failed to act -- then my plan will require us to come together and make up the additional savings with more spending cuts and more spending reductions in the tax code," he said.

So, what exactly does President Obama mean when he calls for "spending reductions in the tax code"?

To get straight to the bottom line, what he proposes to do is to significantly increase the federal income taxes that productive Americans are required to pay without having to go to the trouble of increasing income tax rates.

Instead, the President is seeking to hike federal income taxes by reducing the amount of deductions and tax credits that honest Americans can claim on their tax returns. But because he doesn't want to appear to be raising federal income taxes, he's using some really deceptive language.

To understand why President Obama would seem to be so anxious to do this, consider the following chart, in which we've calculated the aggregate distribution of income in the United States by personal annual income for 2009. We've also estimated how much of this aggregate income is actually subjected to federal income taxes, where the taxpayer pays out money to the federal government, which we've shown in the shaded red region: 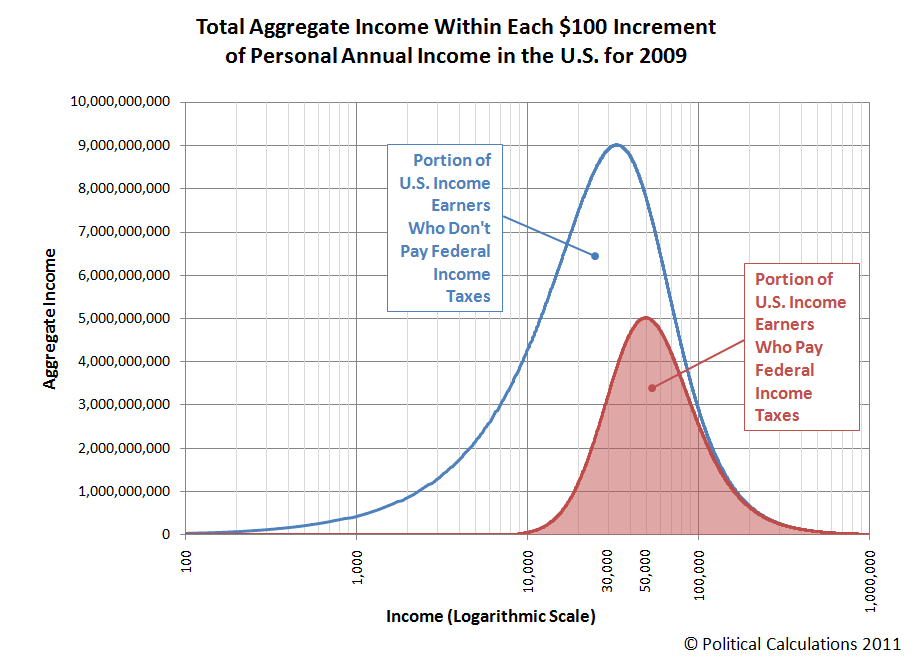 You can see how twisted the President's ambition to increase federal income taxes is if you consider that all of those deductions and tax credits are related to things that the federal government wants to encourage among Americans. Things like home ownership (via the mortgage interest deduction), higher education (through education tax credits) and having children (unsurprisingly, the child tax credit).

Before we close, please consider one last thing. Much of the President's rhetoric focuses on getting more from people at the highest end of the income spectrum. As you can see in our chart above, these are the people who already have the least amount of avoidance in escaping having to pay federal income taxes, which we see in the minimal white space above these income levels. The biggest potential gains for the federal government's tax collections are to be had by going after the where the amount of white space in the chart is the greatest.

Where does your personal income fall on that scale?