Political Calculations
Unexpectedly Intriguing!
June 10, 2011
Who's Behind the Drop in Gas Prices? 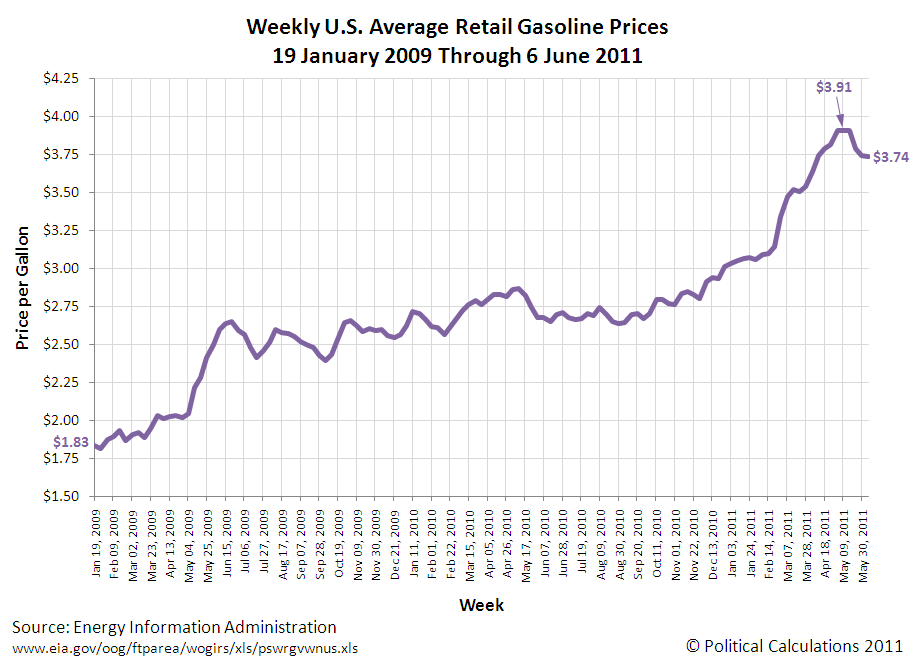 But who is behind that drop in these recent weeks? Was it President Obama?

Let's see what he said on 2 May 2011, one week before weekly average retail gasoline prices peaked:

At a time when the economy is struggling to rebound and many people are still searching for jobs, a $4 per gallon price tag is "just another burden when things were already pretty tough," Obama said. Echoing a criticism he has made frequently in the past, the president condemned politicians who "score a few points" by offering quick-fix solutions whenever there is a spike in gas prices. "The truth is, there's no silver bullet that can bring down gas prices right away," Obama said.

So obviously, the President didn't do it. But what about Congress? Could some leader in the U.S. Senate looking to score popularity points for their political party be bothered to do anything about sky-high gasoline prices in the United States?

Hey, what about the nations of OPEC? Sure, they normally like to see prices go up, but with prices so high, maybe they think it would be a good opportunity to really cash in by selling more gas at today's high prices!

A meeting of oil ministers in Vienna broke up unexpectedly without an agreement to raise production. OPEC's president said some members wanted three months to consider the issue.

"This is one of the worst meetings we ever had in OPEC," Saudi oil minister Ali Naimi told reporters after the meeting. "We were not able to reach an agreement."

This could be an echo of the age of dissent and revolutions throughout the Middle East, currency analyst Ashraf Laidi said on Twitter.

The next OPEC meeting is scheduled for December.

Adding to the weirdness, Iran's oil minister says Iran might call for an "extraordinary" OPEC meeting at some point.

Well, we suppose Americans really shouldn't look to any of these weirdos to lower the price of gasoline in the U.S.

But back to answering our original question, the person who is behind the fall in gasoline prices is actually you. Or more accurately, lots and lots of people like you reacting to what's going on all around you.

What happened during the week-long period ending 9 May 2011 is that you changed your expectations for the future. Instead of believing that the future in 2011 would be characterized by upward growth, as many of you had up to that week in time, you instead developed a less positive outlook based upon the conditions you saw developing.

The price for gasoline, which is the lubricant that makes the economy run, changed to match your new expectations. It fell, largely because a weak economy doesn't need to consume as much gasoline to make it run.

As for what caused all of you to change your outlook for the future of the economy so dramatically, we've already offered a viable hypothesis that might very well explain what kicked off the fall in U.S. gas prices.

And it's exactly the sort of thing that all the weirdos with little interest in seeing gas prices go lower don't want to think about.