Today we're going to show you that increases in the minimum wage are indeed very well correlated with the reduction in the employment to population ratio for teens.

But wait, you say! Didn't Invictus show a chart indicating otherwise over at The Big Picture? 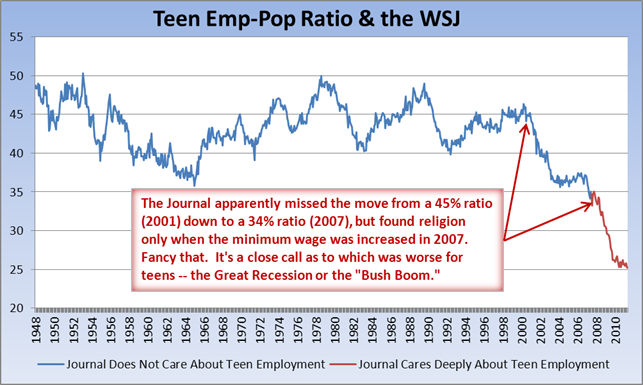 And didn't you yourself yesterday show a chart that seemed to agree with Invictus' conclusions? 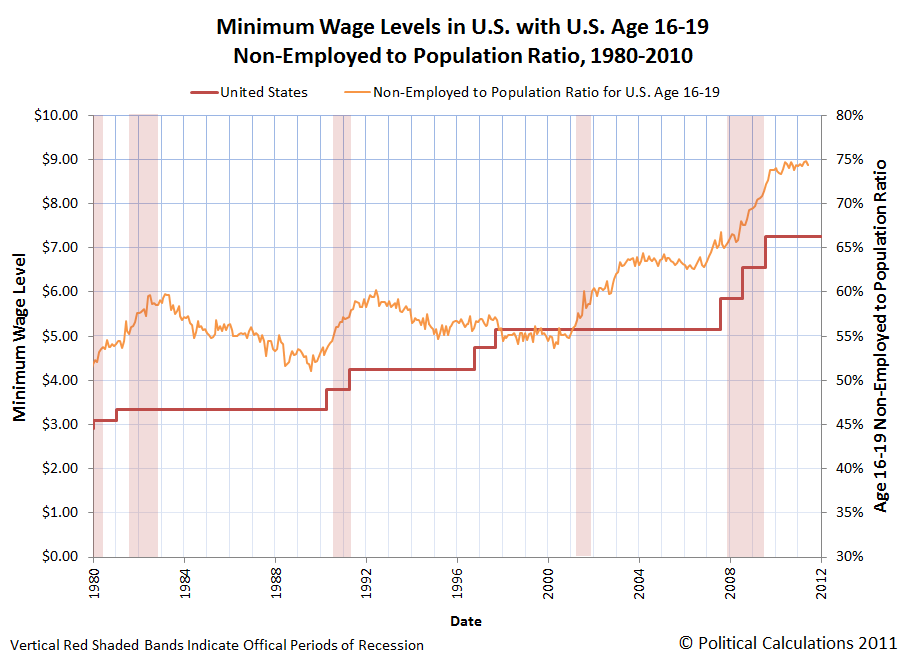 Why yes! Yes we did! And here's what we said about that apparent agreement:

So at first glance, it would appear that Invictus is correct and the editorial writers of the Wall Street Journal are wrong on the effect of the minimum wage on teen employment levels.

However, that's only at first glance. We can't help but notice that Invictus' analysis is superficial at best and is really fundamentally flawed, because he appears to have a California-size hole in his analysis.

We say Invictus' analysis is fundamentally flawed, because what Invictus completely forgot to consider in his analysis discounting the role of the minimum wage in affecting the employment to population ratio of American teens is that there is more than one minimum wage in the United States!

Since we keep mentioning this as being a California-size hole in Invictus' analysis, let's compare California's minimum wage with the U.S. federal minimum wage over the years from 1980 through 2012: 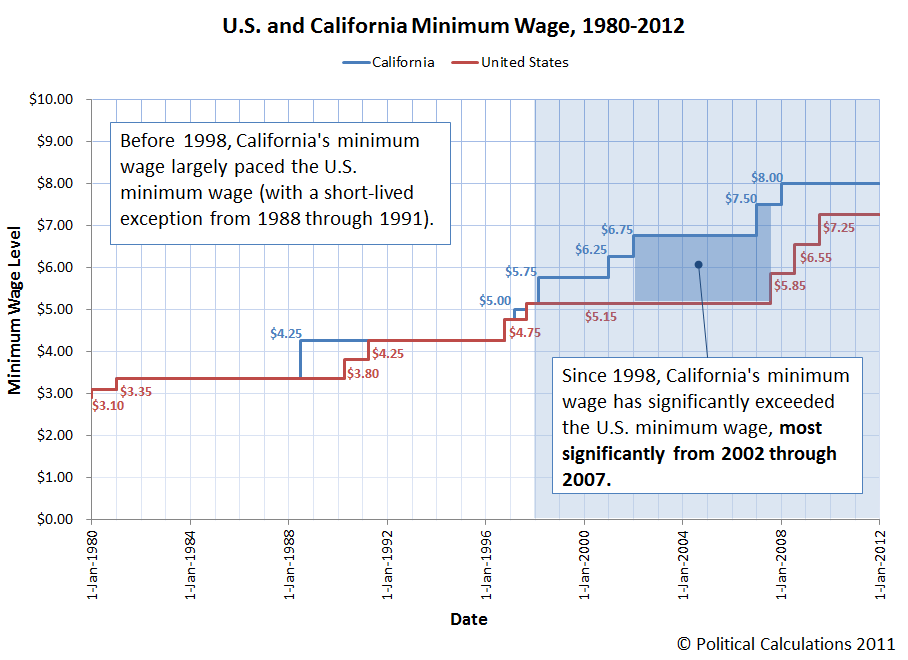 That's a big difference for the years from 2002 through 2006. And it's meaningful for a serious analysis of the relationship between increases in the minimum wage and rising teen joblessness because California is home to an awful lot of teenagers: 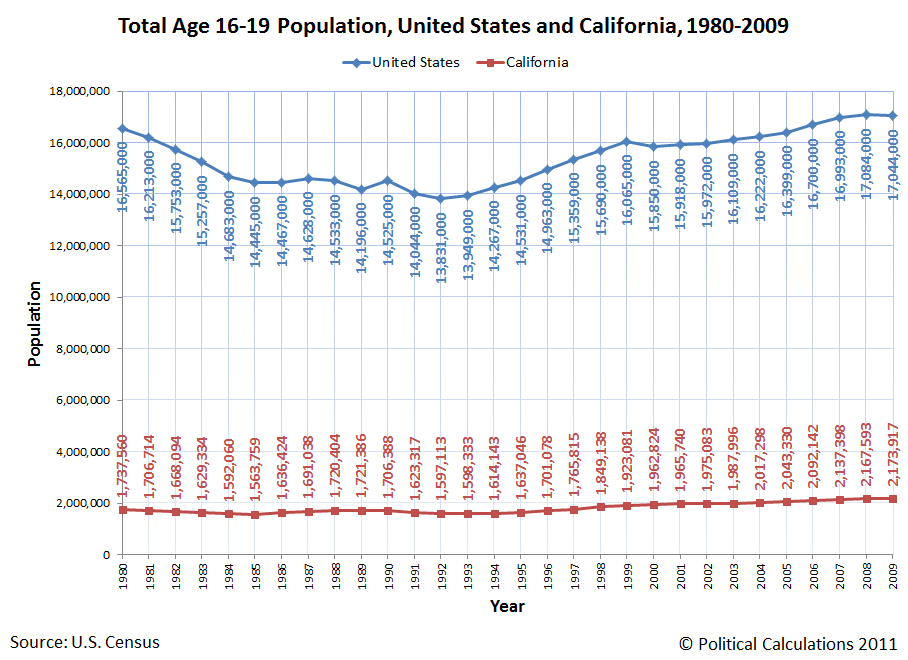 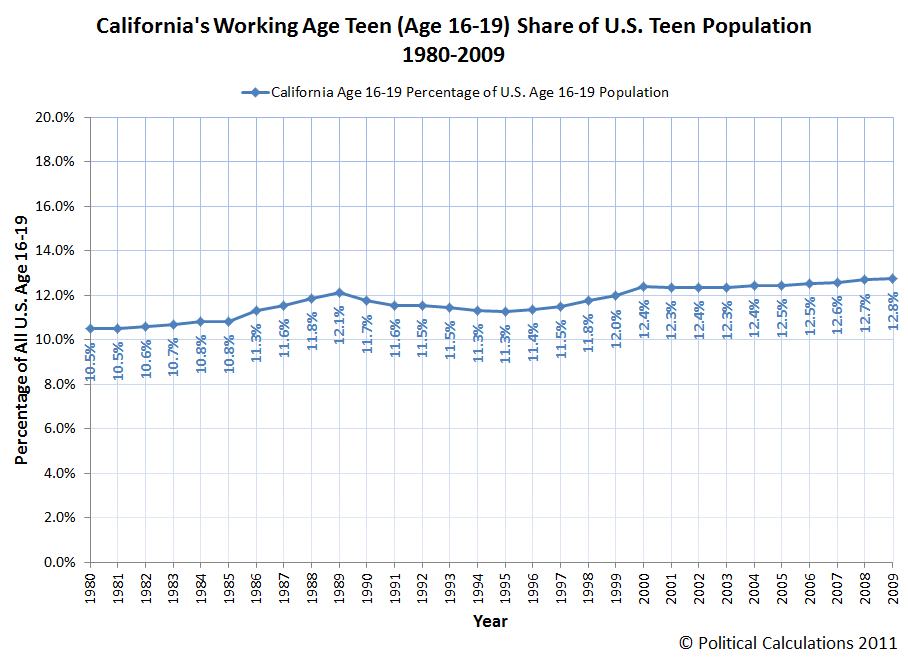 So what happens when a state that's home to one-eighth of the working age teen population of the United States sets its minimum wage at a level equal to 131% of the U.S. federal minimum wage? See for yourself: 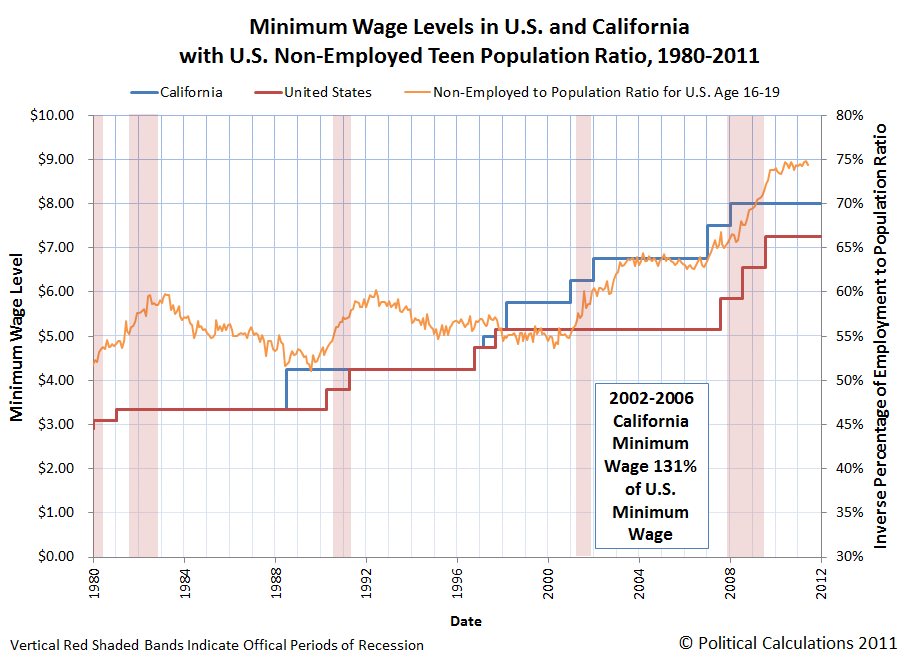 There's only one exception. The period from 1998 to 2000, where an increase in California's minimum wage is not matched by an increase in the jobless teen population. As it happens, this period of time corresponds to the inflation phase of the Dot Com Bubble, which was characterized by a booming job market that was, perhaps coincidentally, centered in California's Silicon Valley. 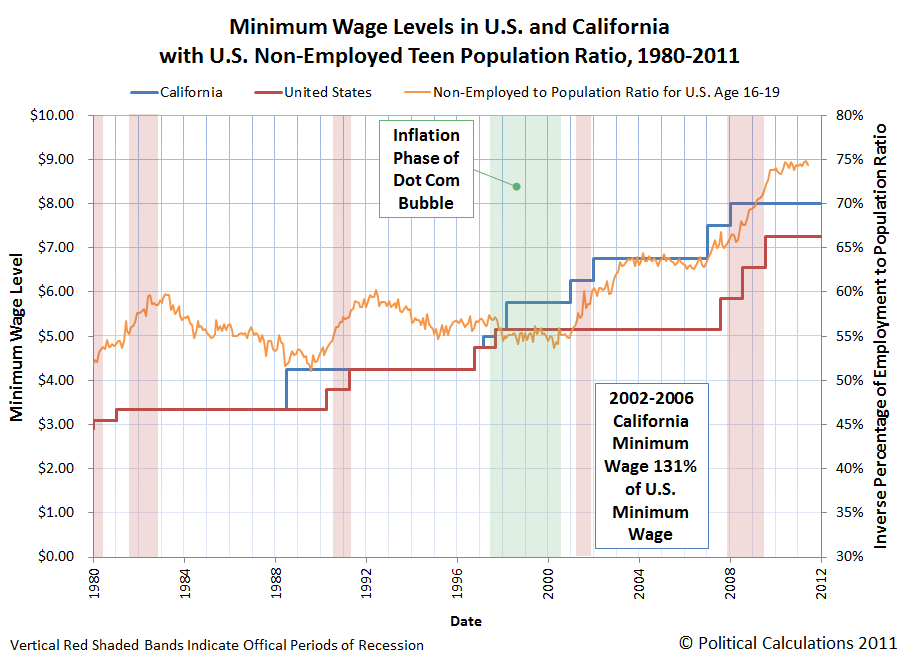 The booming job market of the Dot Com Bubble's inflation phase counteracted the typical effect of a minimum wage increase on the teen employment to population ratio, which explains why this period displays results that are not observed in other periods. It is the only period of time covered by our analysis in which employers had enough of a boom in revenue to more than cover the increased costs of employing low-skilled entry level workers after a minimum wage hike was enacted.

In fact, if not for California's minimum wage increases in 1997 and 1998, it's very likely than the drop in the number of non-employed teens in the years from 1998 through 2000 would have been much greater, as more teens would likely have joined the U.S. workforce to take advantage of the opportunities available to them.

Finally, for our money, the most interesting correlation we observe in the chart may be seen by what happens to the non-employed teen to teen population ratio when either California's or the U.S. federal minimum wage increases and also by what happens when those increases stop and the minimum wages hold steady. It appears as if both the California state legislature and the U.S. Congress have a switch for controlling the level of the teen employment to population ratio that they can turn on and off.

As such, we find the changes observed in the teen employment to population ratio in the years from 1980 through 2011, and especially in the period of interest of 1997 through the present, to be largely a government-manufactured phenomenon.

And also as such, we find that the anonymous editorial writers of the Wall Street Journal are on much more solid ground than is the anonymous blogger Invictus in considering what correlation the minimum wage might have with respect to the decline in the percentage of the working teen population over time.