We can answer these questions by seeing how the spreads of Credit Default Swaps (CDS) - the special insurance policies that investors in debt securities can buy that pay out in the event the borrower defaults on their owed debts, have changed over time. Because the costs (or spreads) of these insurance policies are dependent upon the likelihood of default, we can correlate changes in their level over time with the events that could drive the observed changes.

The chart below shows the risk of the U.S. defaulting on its 10-Year Treasury as measured by CDS spreads from 14 December 2007 through 8 August 2011, an interactive version of which is available from Bloomberg: 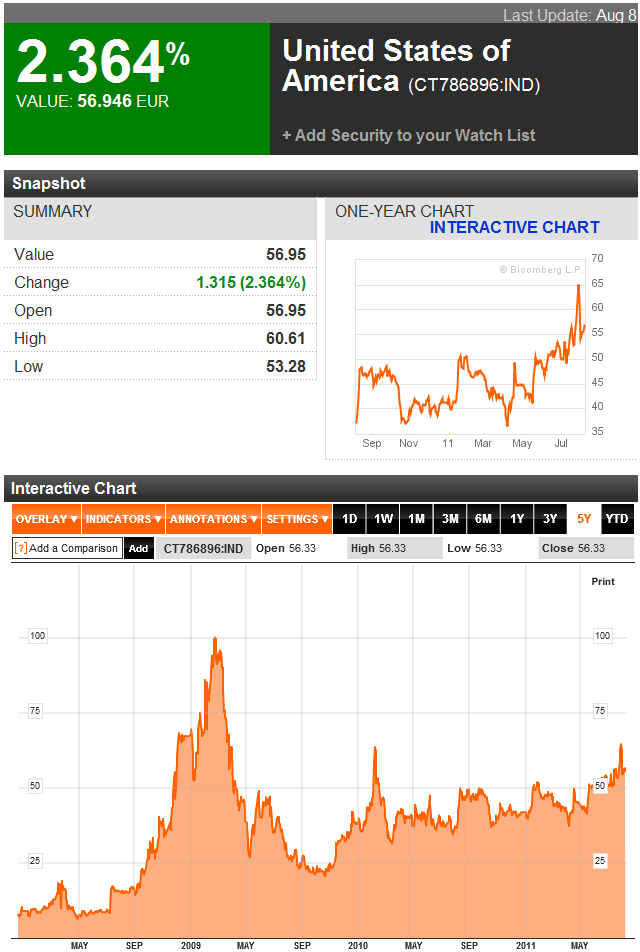 We'll next go through the major gyrations shown in the chart above, providing a timeline of the major events that could influence the perception of the risk of a U.S. default from the end of 2007 through the aftermath of S&P's credit rating downgrade of the creditworthiness of the U.S. government.

From the end of 2007 through 8 August 2011, the risk of the U.S. government defaulting on its debt payments, as measured by CDS spreads, in the U.S. increased by about 50 points.

Because the risk of default is directly proportional to interest rates, with a 100 point change being roughly equal to a change in interest rates of 1%, we estimate that the yield on the U.S. 10-Year Treasury has risen to be about 0.5% higher than it would otherwise be if not for the high debt-level driven increase in the risk of a U.S. government default on its debt payments.

Though small, that 0.5% increase is sufficient to reduce the U.S. GDP growth rate by approximately 1.3 to 1.4% in 2011. This is a principal reason why the government's stimulus programs in recent years have largely failed to generate the levels of growth their proponents had projected.

As a final note, we'll observe that actions consistent with the objectives of so-called "Tea Party" have tended to decrease the risk of a U.S. government default over the past several months and years, which directly contradicts the political spin being produced by the White House and Democratic Party members.

If only President Obama had any good ideas on how to fix that problem....