So just how much is President Obama underwater today? Believe it or not, we're referring to the value of the President's residence in Chicago and not to the President's standing in the latest polls!

To find out, we went back into our previous analysis of the value of the President's primary residence in Chicago, Illinois, and updated it using the Federal Housing Finance Agency's latest revised data for how housing prices have changed in the Chicago metropolitan area over time.

Using that revised and updated data, we found that the value of President Barack Obama's Chicago house has fallen in value more than $682,000 below the amount he paid for it back in the second quarter of 2005. We estimate that the property for which he paid $1.65 million for then is worth less than $1 million today. 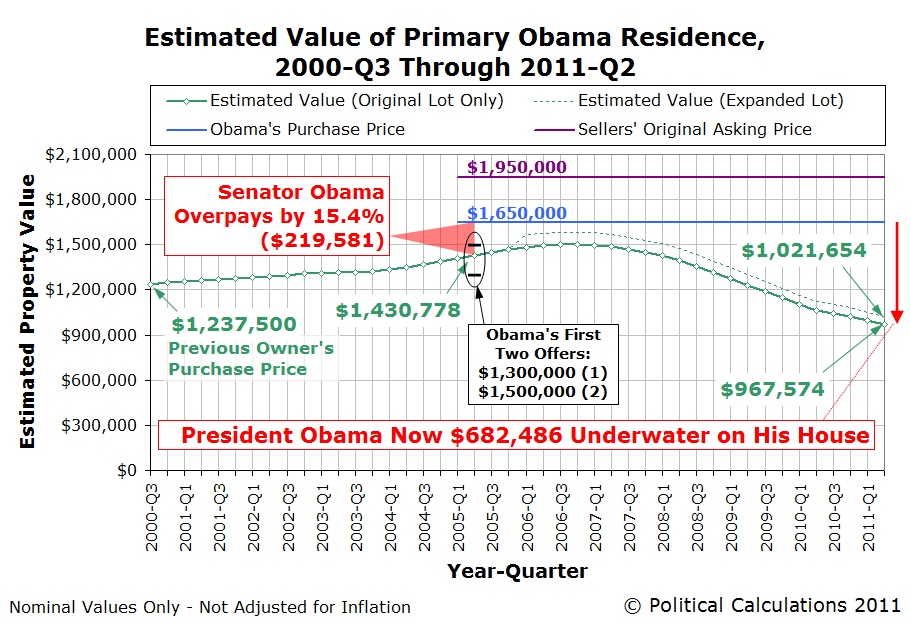 That figure isn't helped by the fact that then Senator-elect Obama overpaid nearly $220,000 for the house at the time when he bought it. Using the FHFA's housing price change data and the previous owner's purchase price of $1,237,500 back in the third quarter of 2000, we've projected that the home's value was approximately $1,430,000 in the second quarter of 2005, far below the $1,650,000 price Obama negotiated for it.

We note that then Senator-elect Barack Obama's first two offers for the house of $1,300,000 and $1,500,000 were consistent with this estimated value, as well as the value of similar properties in close proximity to the house.

If accurately reported at the time, this largest transaction in Barack Obama's personal finance history would have provided the clearest signal to American voters that the presidential candidate had an alarming tendency toward extremely wasteful spending where his own finances were concerned, a trait we have since observed to now apply to the nation's public finances.

Overall, because then Senator Obama purchased a section of an adjacent property (the so-called "Rezko" lot) in the months following his original house purchase, we estimate the current total value of President Obama's Chicago residence to be approximately $1,022,000. We estimate the current value of the portion of the President's property that was originally purchased in the second quarter of 2005 to be approximately $968,000.

Using the projected value of President Obama's Chicago residence as a proxy for looking at the change in the value of Chicago's real estate market over time, we see that home values in Chicagoland do not appear to have yet bottomed.

That's remarkable in that Chicago's real estate market did not participate in the speculative real estate bubble that characterized the middle years of the decade of the 2000s in other regions of the United States. As such, the decline in real estate values in Chicago are more representative of the general decline in the U.S. economy that has occurred since Barack Obama was first sworn into office as a U.S. Senator in January 2007 and that has continued after his being sworn into office as U.S. President in January 2009.

We wondered if President Obama, like many Americans, was underwater on the house he purchased in 2005. It turned out that he was!