Yesterday, in projecting where U.S. GDP will most likely be in the months ahead, we closed our post with the following comment:

Overall, the U.S. economy is continuing to perform as expected. We anticipate that growth will continue at a similar pace to 2011-Q3 through the end of the year, however we expect that the U.S. economy will begin to slow significantly in the second quarter of 2012, based upon dividend futures data for the S&P 500.

The only problem with that comment is the link, where we pointed back to a post from June 2011, which was based on analysis when we only had the dividend futures for the S&P 500 through the end of the second quarter of 2012 available to us.

Since we now have dividend futures data available to us through the fourth quarter of 2012, the chart below updates the future we see: 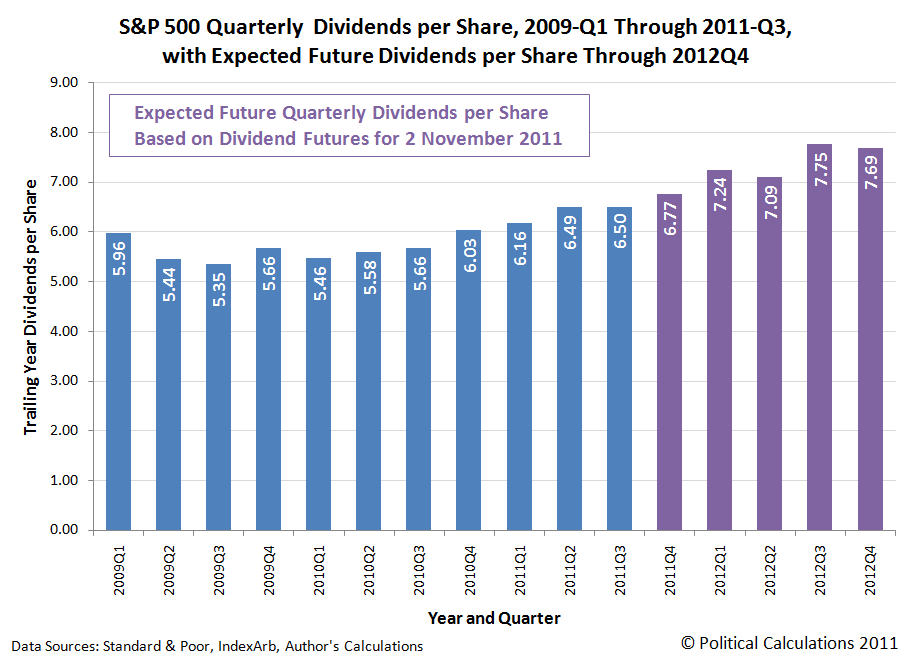 Typically, when the economy and stock market are growing, quarterly dividends per share will rise from quarter to quarter, peaking each year in the fourth quarter (as a number of companies that pay their dividends annually issue their dividends at this time.)

When there's a deviation in that pattern, it indicates that something else is happening. For example, if you the historical data recorded through this point of 2011, you see that quarterly dividends per share stall out at $6.49 and $6.50 per share between the second and third quarters of 2011. This period of time coincides with what we've previously described as a microrecession, which has been characterized by low economic growth.

We should also note that dividends per share are a bit of a lagging indicator - economy-driven changes tend to show up in the dividend data a quarter later. 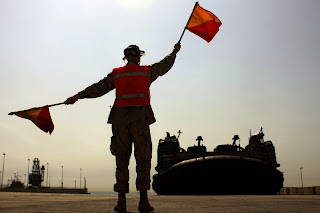 Getting back to the present, what's unusual in the chart above is that the dividends currently expected to be paid out in 2012 are deviating from the basic pattern that would be consistent with steady economic growth. There are two places in the chart above that suggest that the road ahead for the U.S. economy will be rocky in 2012, which we see as the dips in the amount of the quarterly dividends expected to be paid in the second quarter of 2012 and again in the fourth quarter of 2012.

What the S&P 500's dividend futures are signaling is that these quarters will be pretty lackluster in terms of overall economic growth. Given the lagging effect of the dividends, we currently expect the U.S. economy to begin slowing significantly in the first quarter of 2012, recover a bit, then fall back in the second half of the year.

If it helps put things into a larger perspective, it's perhaps easier to see what dividends per share look like in good times and not-so-good times by considering the historical data for the S&P 500's quarterly cash dividends per share going back to 1988, which Standard and Poor makes easily available in their Earnings and Estimates spreadsheet (which is available under the "S&P 500 Monthly Performance" section in their Market Attributes Series). 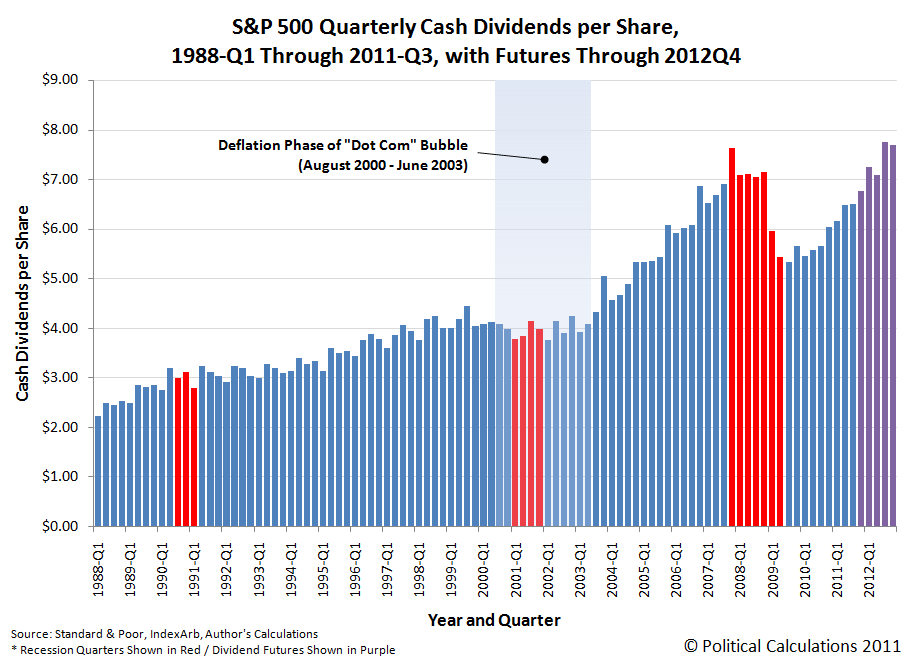 In this chart, we've emphasized the deflation phase of the "Dot Com" stock market bubble - in addition to containing a recession, the period of time following the official end of the recession in November 2001 was characterized by what has been described as a "jobless recovery".

In this case, economic recovery in the U.S. didn't really take hold until the U.S. government acted to correct the imbalance it had created in the markets that led to the formation of the "Dot Com" Bubble in the first place. Both the U.S. economy and the stock market began growing steadily again immediately afterward.

What do you suppose the U.S. government has done now that will apparently have to wait until after 2012 to be corrected?