Two days before Christmas 2011, the U.S. Congress acted to pass a temporary extension of the Social Security payroll tax cut that had originally been passed a year earlier, and which had been set to expire at the end of 2011. To celebrate the occasion, the White House issued the following statement describing who would benefit from extending the Social Security payroll tax cut:

President Obama today signed into law a two month extension of the payroll tax cut, which means that 160 million American workers will not see their paychecks shrink starting Jan 1, 2012. The President thanked Congress for ending the stalemate and urged them to keep working to reach an agreement that extends this tax cut as well as unemployment insurance through all of 2012, saying it is the right thing to do for American families and for the economy, and called it "a boost that we very much need right now."

While technically true, we find that the White House's statement is misleading.

The only problem is that just over half of those wage and salary earning individuals ever saw any benefit from the Social Security payroll tax cut on their paychecks in the first place!

We'll illustrate why that was the case with the following chart, which presents the withholding income tax rates for individuals having money withheld at the "Single" tax filing status rates throughout the year for both 2010 and 2012. 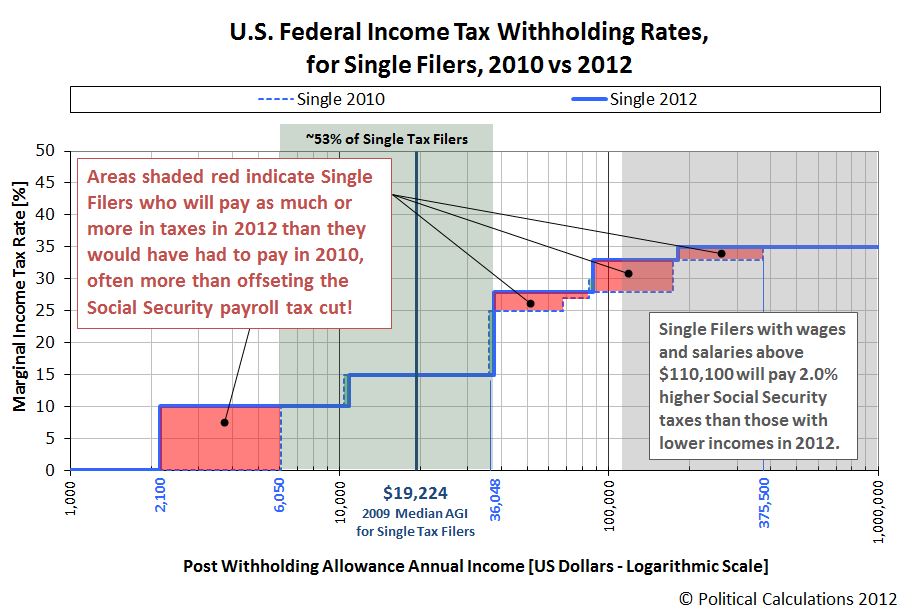 The 2012 withholding tax rates shown in the chart above are nearly identical to those for 2011 - the only difference is that the incomes at which the withholding tax rates apply for 2012 have been adjusted upward slightly from 2011's levels to account for the effect of inflation over the past year.

What we find is that for all practical purposes, the only individuals who really benefitted from the payroll tax cut of 2010 were individuals with incomes between $6,050 and $37,500.

Assuming that the income distribution given by the IRS' adjusted gross income data for single tax filers from 2009 is representative of today's single tax filers, we estimate that roughly 53% of the wage and salary earners who have their taxes withheld at the Single filing status will see any significant benefit on their paychecks from the extension of the Social Security payroll tax cut. At least, as compared to what their paychecks would have looked like for earning the identical incomes in 2010, before the temporary Social Security payroll tax cut was enacted.

Much of the same math applied for 2011, which is a major reason why there was so little economic "stimulus" from the payroll tax cut - instead of having more money to take home, a very large percentage of individuals took home less money after all tax withholding from their paychecks than they would have in 2010.

And for all practical purposes in 2012, almost all individuals with incomes above $37,500 will see the federal government's withholding and payroll taxes claim a larger share of their paychecks than they would have seen in 2010. With almost exactly the same economic benefit from the "stimulative" effect desired by President Obama.

But at least now the pain of higher federal taxes taking more money out of every paycheck is being spread among all those single tax filers with incomes above $37,500.