Welcome to 2012! We're kicking off the new year by solving the biggest civil rights crisis in America today, at least according to the United States Department of Justice: the racial disparity in the percentage of individuals without current photo identification needed for voting in South Carolina!

The editorialists of the Wall Street Journal were a bit taken aback by the apparent priorities of the U.S. DOJ:

Eric Holder must be amazed that President Obama was elected and he could become Attorney General. That's a fair inference after the Attorney General last Friday blocked South Carolina's voter ID law on grounds that it would hurt minorities. What a political abuse of law.

In a letter to South Carolina's government, Assistant Attorney General for Civil Rights Thomas Perez called the state law—which would require voters to present one of five forms of photo ID at the polls—a violation of Section 5 of the 1965 Voting Rights Act. Overall, he noted, 8.4% of the state's registered white voters lack current photo ID, compared to 10% of nonwhite voters.

This is the yawning chasm the Justice Department is now using to justify the unprecedented federal intrusion into state election law, and the first denial of a "pre-clearance" Voting Rights request since 1994.

According to the 2010 U.S. Census, 66.2% of South Carolina's 4,625,364 entire population were racially classified as being "White alone", while 27.9% were racially classified as being "Black or African American alone", who make up the lion's share of the state's "non-white" population. We will assume these percentages hold for the state's voting age population, which would put the number of individuals Age 18 or older at 3,544,890. 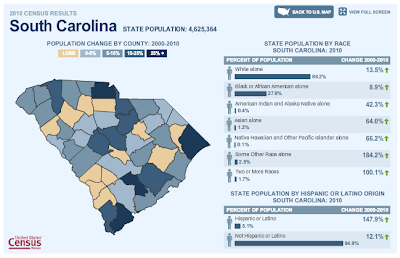 Simple multiplication then tells us that there are approximately 2,346,717 "whites" and 989,024 "blacks" of voting age in South Carolina.

These figures assume that 100% of the state's voting age population is registered to vote. In reality, an estimated 65.6% of South Carolina's voting age population actually voted in the 2008 election, which suggests that the actual number of registered voters in the state who might be affected by not having a current photo ID will be nearly one-third smaller than our figures suggest. We'll assume the 100% figure for our remaining calculations however, because they would represent a worst-case scenario.

Using those larger numbers then, all it would take to make the percentage of blacks without current photo IDs be equal to the percentage of whites without current photo IDs to achieve Assistant Attorney General Thomas Perez' vision of perfect racial equality is for 13,846 blacks to take the simple action of renewing the photo IDs they have previously been issued by the state of South Carolina, and which have since expired.

After all, common sense tells us that individuals who have previously been able to obtain valid state-issued photo identification should have a pretty simple time doing so again. Apparently, the state's Department of Motor Vehicles will even pick you up and drive you to their office for the sake of getting you a valid and current photo ID to support your desire to vote in the last days to register ahead of an election!

Going back to the numbers, South Carolina's Department of Elections reports that 240,000 state voters lacked current ID cards as of October 2011. The state's Department of Motor Vehicles has indicated that 200,000 of those represent a combination of individuals whose existing photo IDs have expired (most often), or who have moved to other states, or who have passed away.

For those who haven't moved to other states or died, perhaps the easiest solution for obtaining a current photo ID would be to follow the directions provided by South Carolina's Department of Motor Vehicles for renewing their expired driver's license to make them current.

And to help "nudge" them in the right direction, we would recommend that Assistant Attorney General Thomas Perez take steps to prevent these particular individuals from doing things like boarding aircraft, buying alcohol, tobacco or firearms, depositing a check at a bank, applying for a loan, or voting in a union election, to name just a few ways the government might use its power to compel such people to eliminate the specific racial disparity of which he is so concerned.

At least then, perhaps Assistant Attorney General Thomas Perez will feel like he is achieving something meaningful in his career!

File, Thom and Crissey, Sarah. Voting and Registration in the Election of November 2008. Current Population Reports. U.S. Census Bureau. May 2010.