Now that the U.S. Bureau of Labor Statistics has updated its overall count of the number of employed Americans to incorporate data recorded by the 2010 U.S. Census, with a corresponding surge of 847,000 in the number of individuals counted as being employed in January 2012 as compared to December 2011, we thought we would ask the question: "How well are teens really doing in the U.S. economy?" 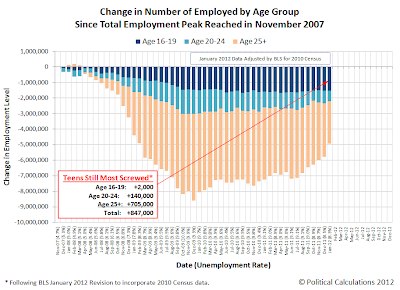 The answer: "They're still the most screwed over...."

To see why, we've updated our monthly chart showing the overall change in the number of employed by selected age groupings with the latest data incorporating the BLS' statistical adjustment, which affected all data reported since January 2007.

Here, compared to when total employment in the United States peaked in November 2007 ahead of the December 2007 peak in economic expansion that marks the beginning of the most recent recession, we find that the number of individuals Age 25 or older jumped by 705,000 between the value recorded in December 2011 and January 2012, while the number of young adults between the ages of 20 and 24 counted as having jobs increased by 140,000.

But teens between the ages of 16 and 19 only saw their numbers increase from December 2011 and January 2012 by just 2,000, even with the statistical adjustment!

We should note is that all of the statistical adjustment related to the 2010 U.S. Census was incorporated into the data for January 2012. That will make comparisons between this and later months with data recorded between 2007 and 2011 somewhat of a challenge, which we'll address in the future after we have accumulated several months worth of new data.