Political Calculations
Unexpectedly Intriguing!
April 19, 2012
How Much Does President Obama Still Owe on His House?

In June 2005, President Barack Obama paid $1.65 million to acquire his house in Chicago. How much do you think he still owes on it today? 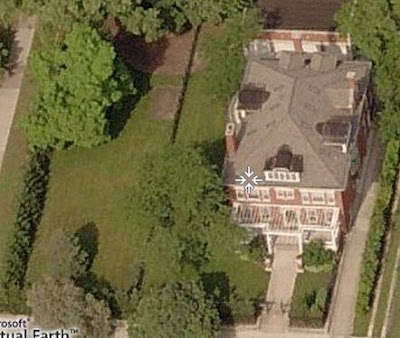 Believe it or not we can actually answer that question using information from the President's tax returns, which he has released to the public! Combined with information about his mortgage, which the Washington Post has been kind enough to publish, we estimate that as of this month, April 2012, President Obama still owes approximately $806,000 on his residence at 5046 South Greenwood Avenue in Kenwood, Illinois.

Here's how we know. Since President Obama closed on the transaction to purchase his Chicago residence in June 2005, we estimated that his first payment would be in August 2005. Taking the original amount of the President's mortgage (approximately $1.32 million) along with his interest rate (5.625%), we used Hugh Chou's mortgage calculator to generate a full amortization schedule for the President's 30 year mortgage, which would apply provided that the President has never acted to refinance his mortgage.

President Obama's monthly mortgage payment on his Chicago residence is over $7,598. This combined total of just principal and interest adds up to $91,184 per year.

We then worked out what remaining principal would coincide with having made $47,564 in mortgage interest payments over a 12 month period of time, as he did for the 2011 tax year under the terms we know of his mortgage. That amount turns out to be almost $821,000, which represents the amount that the President still owed on his house in Chicago as of the end of 2011.

Looking ahead by four additional months down the amortization schedule to bring us up to this point in time, April 2012, would put the amount of principal still remaining on the President's mortgage at approximately $806,000. And that's how we arrived at this figure!

Examining President Obama's previously released tax returns, we can reconstruct a good portion of the President's payment history on his mortgage.

For example, sometime in either December 2005 or January 2006, the President made an extra payment toward his mortgage of approximately $225,000. We base this estimate upon what the remaining principal on his house would have to be in order to accumulate just the $60,449 of mortgage interest payments by the end of the year, as reported on his 2006 taxes. If President Obama had not made the extra payment on his mortgage, he would have instead reported total mortgage interest payments for 2006 of around $73,000.

The $225,000 figure is not coincidental. Our best estimate of the actual value of President Obama's residence at the time he originally purchased it indicates that he overpaid by approximately $222,170. President Obama's released income tax records therefore provide evidence that indicates that he was fully aware that he had been taken to the cleaners in the transaction. So much so that he was willing to inject a substantial sum of cash into his mortgage for the sake of reducing his increased exposure to the risks of being fully underwater on his newly purchased house less than six months after making his first payment on it.

We also note that January 2006 saw the President's purchase of the so-called "Rezko" lot, a 10 foot wide by 50 feet long strip immediately south of the President's original property for $104,500 in cash. All told, we estimate that the President put nearly $330,000 of cash from his own pocket into his property in Chicago at that time. That would be on top of his original $330,000 down payment for the residence over six months earlier.

Since becoming President and moving to Washington D.C. to live at taxpayer expense in the White House, Barack Obama has made no extra payments toward his mortgage. The amount of mortgage interest paid during these years as reported on his taxes is fully consistent with only making scheduled payments for the remaining principal on the mortgage as reduced by the extra payments described above.

How Much Is Obama Underwater Today?

We estimate how much President Barack Obama's house in Chicago is really worth at the end of June 2011. He was most definitely underwater compared to what he paid for it, but we didn't ask whether he was underwater on his mortgage, which we couldn't answer at the time....

We wondered if President Obama, like many Americans, was underwater on the house he purchased in 2005. It turned out that he was!