Just in case you might have thought that we were the only ones going tax-related tool crazy these days, Nick Kasprak of the non-profit Tax Foundation has done a major update to the organization's MyTaxBurden tool!

Today the Tax Foundation releases its latest interactive tool, an update and overhaul of its successful MyTaxBurden tax calculator. I've rewritten the calculator from the ground up and added a variety of new options and features.

The original MyTaxBurden calculator was released in July 2010, and calculated tax bills for tax year 2011 under three scenarios - full expiration of the Bush and Obama stimulus bill tax cuts, full extension of those cuts, and partial expiration for high income earners in the form proposed by President Obama. Later we added a similar proposal to reflect the proposals of Congressional Democrats, and finally the compromise plan that became law in December.

The new calculator lets the user make these decisions. Each scenario in the calculator represents a particular combination of pieces of legislation, any of which can be turned on and off individually, on top of current law.

Here's a screen shot we snapped of the tool's basic interface: 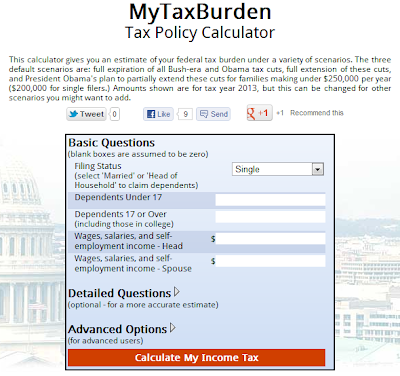 The basic interface is a quick and easy for casual users, but the real strength of the tool is it's ability to go into great detail.

For example, once you click to "Calculate My Income Tax", the MyTaxBurden tool will currently show how you will fare on your taxes under current law, in 2013 after the "Bush tax cuts" of 2003 expire, and under the various proposals that President Obama has advanced.

And then, you can go even deeper into detail! And if you find anything worth commenting upon, the MyTaxBurden tool makes it easy to share what you find with whomever you might choose! (For those who would not like to circulate their income data around the Internet, we recommend entering non-specific data....)

By way of example of what the tool is capable of doing, Nick has put President Obama's own tax return data for 2011 into the MyTaxBurden tool to see how he might fare under four possible scenarios!

To show a quick example of this, let's take a look at President Obama's 2011 tax return under four scenarios:

(2) and (3) are the same in this case, since the expiration of the Bush tax cuts pushes the President out of AMT.

As for how President Obama fares under his own proposals, Nick observes:

Ironically, the President owes the most under his own proposal, because his budget includes a provision to cap the benefits of itemized deductions to at most 28% of their value.

And so we find that the President is unwilling to allow any deduction to go unclaimed on his own tax return....

On a final note, we reviewed the previous generation of the MyTaxBurden.com calculator back in July 2010, awarding it our "Silver Standard" for overall online tool quality.

We're upgrading the MyTaxBurden calculator to our "Gold Standard", as the new generation of the tool appears well adapted to go far beyond the time-specific limitations that held us back from giving it that award in its previous incarnation. We find that it produces highly informative results, allowing users to enter as much or as little data as they might wish in a very clean user interface, producing highly detailed, yet easy to follow results. Very highly recommended.