We have to admit that we're pretty amused by the latest economic dispute to break out in the world of social media involving a Nobel-prize winning economist, Paul Krugman, and the President of Estonia, Toomas Hendrik Ilves. The Los Angeles Times reports:

Estonia enjoys a budget surplus after enduring harsh austerity measures, which have been deeply unpopular across the Eurozone. Wednesday, Krugman argued in a short blog that Estonia, "the poster child for austerity defenders," had only achieved an incomplete recovery.

"Better than no recovery at all, obviously -- but this is what passes for economic triumph?" he concluded.

In response, the Twitter account used by Estonian President Toomas Hendrik Ilves snapped that Krugman was indulging in "smug & snide gloating" at Estonians' expense. One tweet dropped a profane word to sarcastically say Eastern Europeans could be insulted because "their English is bad, won't respond & actually do what they've agreed to & reelect govts that are responsible."

So what of Estonia's austerity? Has it really put the nation on a fiscally-sustainable path? Are Estonians economically benefitting from the steps their government has taken in recent years?

To answer that question, we'll employ the same kind of analysis that we've already applied to the economic situations of Greece, Spain and the United States. Our chart below taps the data on Estonia's governments spending and tax collections per capita from 2000 through 2011 from Eurostat, presenting them against the country's GDP per capita, as recorded in the IMF's April 2012 World Economic Outlook (as presented by the wonderful data site Knoema) for each of those years: 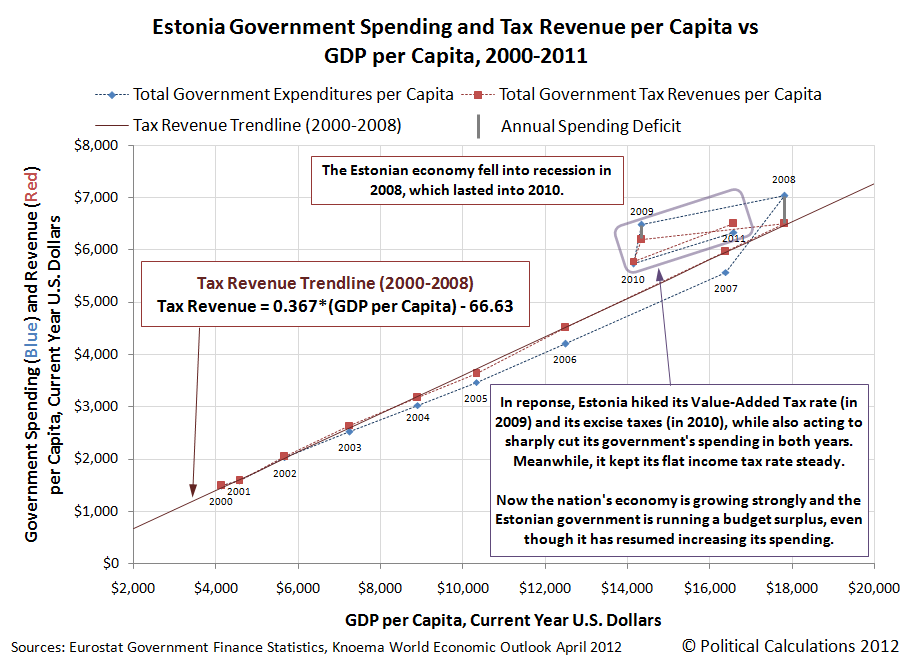 Note: All values in the chart above and discussed below are given in terms of nominal (non-inflation-adjusted) U.S. dollars, rather than inflation-adjusted or Purchasing Power Parity-adjusted terms, because these nominal values corresponds to the amounts of GDP, tax collections or government spending per capita that people, including government officials, actually see in real time.

Looking at the chart, we find that as a percentage of GDP, Estonia's total tax collections were remarkably stable for the years from 2000 through 2008, as the government successfully collected approximately 36.1% of the nation's GDP, less some $66.63 per capita in each year. During that time, we also observe that Estonia regularly maintained either a nearly balanced budget or a budgetary surplus.

In 2008 however, the nation fell into recession, with government spending rising sharply and swinging the government's budget from surplus to deficit, even as its tax collections remained on the same trajectory it had been with respect to the nation's GDP per capita since at least the year 2000, the arbitrary starting point for our analysis.

Unlike the three other governments that we've previously considered however, Estonia's government acted to keep itself on a fiscally-viable path. In 2009, as the nation fell deeper into recession, the government cut its spending by 7.8% from the previous year.

Meanwhile, Estonia kept its income tax rates stable, but hiked its Value-Added Tax rate from 18 to 20% in July 2009.

As a result of the nation's higher Value-Added Tax rate, Estonia's tax collections per capita in 2009 were over 19% higher than would have been collected given the same level of GDP per capita for the tax rates that applied for the years from 2000 through 2008. Estonia's total tax collections fell from the previous year by just 4.8%, which is especially remarkable considering that the nation's GDP per capita fell by almost 20% during that year.

Such a large tax increase had negative effects however as the nation's economy continued to decline, with total tax collections falling 6.7% in 2010, falling much faster than the 1.4% rate at which the nation's GDP per capita declined, as the higher taxes consumed a greater share of the falling incomes of Estonians. That decrease in tax collections occurred even though the government increased its excise taxes on alcohol and tobacco products in 2010.

More significantly however, the Estonian government reduced its spending by 11.5% in that year, which put the nation much closer to being on a fiscally sound footing as the nation's downward economic trajectory began to reverse.

So how was Estonia able to turn its fiscal and economic situation around so effectively?

We'll take on that question in our next post in this series!