Now that we've looked at the last decade's worth of data for both Greece and Spain, two nations whose deteriorating debt situations could well blow apart the European Union, we thought we'd turn our attention across the Atlantic Ocean and look at what has happened to both government spending and tax collections per capita with respect to GDP per capita in the United States in the years from 2000 through 2011. Our results are presented in the chart below: 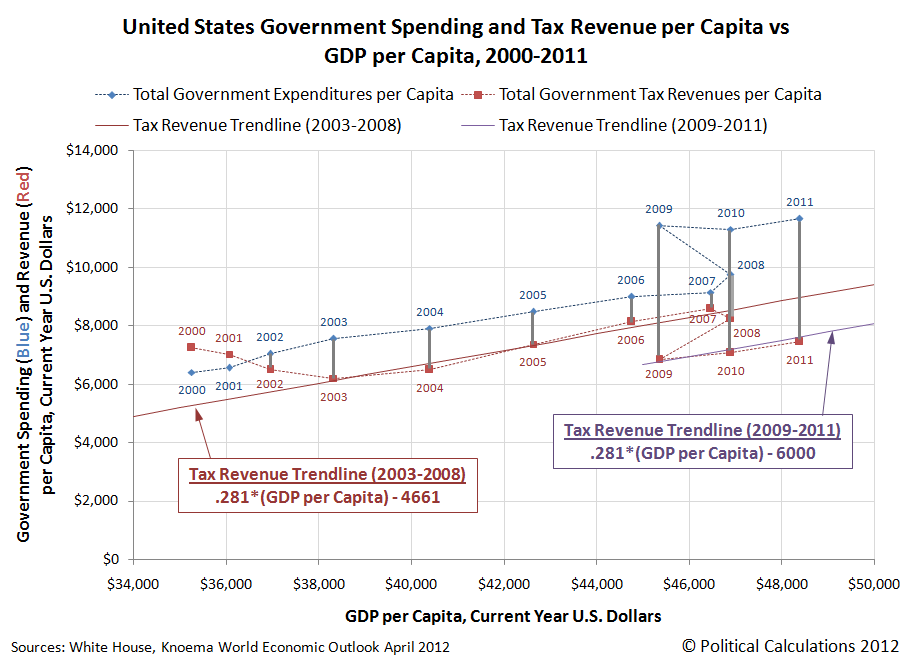 There's a lot going on in the chart, so let's start at the beginning. In the year 2000, the U.S. government ran a budget surplus, as the nation benefitted from outsize tax collections resulting from the peaking of the Dot Com stock market bubble, which reached its maximum inflation in August of that year.

That situation reversed after the bubble burst in the following month and entered its deflation phase as the U.S. economy entered into recession. The deflation phase of the Dot Com Bubble would last until June 2003.

With the end of the Dot Com Bubble's deflation phase in 2003, the U.S. economy began to grow again and the U.S. government's tax collections began to rise. This increase in tax collections occurred despite the implementation of large tax cuts in 2003.

Under those tax cuts, the U.S. government effectively taxes its economy at a tax rate of 28.1%, which we've shown with the tax revenue trendline shown in the chart for the years of 2003 through 2008. In addition, the federal government would appear to provide the nation's economy the equivalent of a $4,661 per capita tax credit.

In 2008, the U.S. economy entered into a deep recession that bottomed in 2009, which we can observe in the chart with the decline in the nation's GDP per Capita coinciding with that year. During the time since, which corresponds with President Obama's entire presidency, we see that the federal government's spending has skyrocketed while its tax collections have fallen far below where they were for the same level of GDP per Capita in the years from 2003 through 2008, opening up a wide gap between the two.

That's significant because both observed changes are directly due to policies implemented by President Obama during his term in office. In addition to significantly boosting the federal government's spending, the President has also implemented tax cuts that have contributed to the widening of the gap between the federal government's spending per capita and tax collections per capita - putting the nation onto an unsustainable fiscal path.

But you don't have to take our word for it. Here is what President Obama's re-election campaign has to say of their achievement in reducing the federal government's tax collections (or at least, what they said on their web site as recently as 2 June 2012):

Put more simply, the only reason the federal government is not collecting an amount of taxes equal to what it would have for the same GDP per Capita in the years from 2003 to 2008 are the tax policies specifically implemented by the Obama administration.

We find then that President Obama's claim of putting an extra $1,000 in the typical middle-class family's pocket is both a bit understated and also ignores the true cost of the impact of his policies upon the nation's fiscal situation. By shifting the burden of taxation away from where the most income is to be found in the United States in favor of forcing a much smaller number of GDP generators to bear an increasingly disproportionate share of the tax burden in the U.S., President Obama has seriously degraded the fiscal health of the United States government during his time in office, far beyond the impact of just his spending increases alone.