With the role of red bureaucratic tape in hampering small business just in the news, we thought we'd take a historic look at how many pages of new rules and regulations the federal government spits out every year.

Or rather, in each year beginning with 1936, because that's all as far back as we could find the data! Our chart below visualizes what we found: 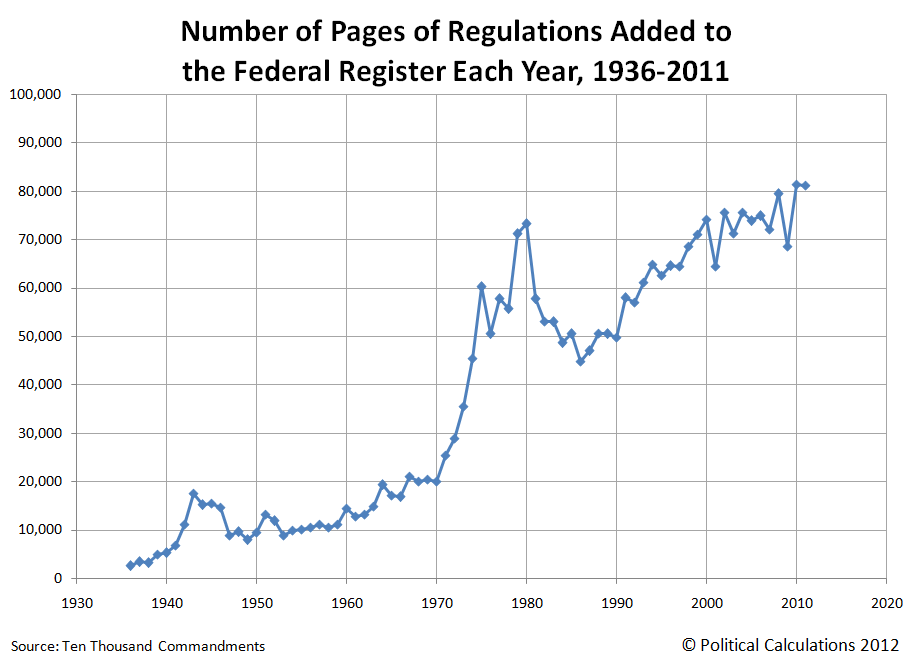 Generally speaking, with the exception of the period of World War 2, we find that the federal government used to be pretty well contained when it came to imposing new rules and regulations on the American people - at least, all the way up to 1970, when it appears to have undergone a bureaucratic explosion!

Here, the creation of the Environmental Protection Agency appears to have been the impetus for unleashing unprecedented waves of new rules and regulations affecting nearly every aspect of American life all throughout the next decade.

In the first decade of the twenty-first century though, the amount of new rules and regulations issued each year was largely stable. That changed with the financial crisis of 2008, which saw new rules and regulations issued by the federal government spike in that year, but which abated with the waning of the crisis in 2009 as the number of pages issued to the Federal Register fell.

In 2010 however, President Obama cranked up the federal government's regulation mill to all time highs, keeping it there at least through 2011.

Wayne Crews' data for 2010 through 24 July 2012 indicates that the federal government is currently on pace to issue at least 76,300 pages of new rules and regulations this year, but we suspect the actual figure will be much larger.

The reason why is because of ObamaCare, where the recent Supreme Court decision allowing the law to go into effect will require the federal government to issue a very large number of new rules and regulations before next year:

With the Supreme Court giving President Obama's new health care law a green light, federal and state officials are turning to implementation of the law -- a lengthy and massive undertaking still in its early stages, but already costing money and expanding the government.

The Health and Human Services Department "was given a billion dollars implementation money," Republican Rep. Denny Rehberg of Montana said. "That money is gone already on additional bureaucrats and IT programs, computerization for the implementation."

"Oh boy," Stan Dorn of the Urban Institute said. "HHS has a huge amount of work to do and the states do, too. There will be new health insurance marketplaces in every state in the country, places you can go online, compare health plans."

The IRS, Health and Human Services and many other agencies will now write thousands of pages of regulations -- an effort well under way:

"There's already 13,000 pages of regulations, and they're not even done yet," Rehberg said.

We anticipate that most of the new rules and regulations related to the implementation of ObamaCare will be issued after the 6 November 2012 election, mainly to avoid drawing an even more negative response from voters beforehand. So add *that* to your fiscal cliff to worry about in 2013!