Once upon a time, Harvard economist Greg Mankiw concocted a mathematical formula for predicting how the U.S. Federal Reserve would set its basic interest rate for U.S. banks: the Federal Funds Rate.

What makes the formula unique is that it incorporates data that captures the Federal Reserve's dual mandate, where it has been specifically directed by the U.S. federal government to promote policies that provide for price stability and for full employment, which it primarily does by periodically adjusting the value of the Federal Funds Rate, which in turn, affects nearly all other interest rates in the United States.

We say "primarily" because since January 2009, the Federal Reserve's Open Market Committee, the secretive gang of President-appointed and Congress-approved bankers who set the Federal Funds Rate, ran into a fundamental problem - they couldn't lower the value of the Federal Funds Rate to go below 0% as the U.S. economy entered into a highly deflationary environment with the worsening of a recession.

So the Fed had to turn to more exotic methods to try to stabilize prices, which were falling, and to maximize employment, which was also falling. And that's where the concept of quantitative easing came into play. Investopedia defines and explains:

Central banks tend to use quantitative easing when interest rates have already been lowered to near 0% levels and have failed to produce the desired effect. The major risk of quantitative easing is that, although more money is floating around, there is still a fixed amount of goods for sale. This will eventually lead to higher prices or inflation.

Since January 2009, the Federal Reserve has implemented two distinct rounds of Quantitative Easing, or QE, programs. The first, which we'll call QE1, ran from March 2009 through March 2010. The second, QE2, ran from September 2010 through June 2011.

With only these two episodes of quantitative easing to go by, we wondered if Mankiw's Approximate Federal Funds Rate, the math formula for which isn't affected by real world limitations like not being able to lower the Federal Funds Rate below zero, could be used to predict when the Federal Reserve might once again turn on the QE spigot. 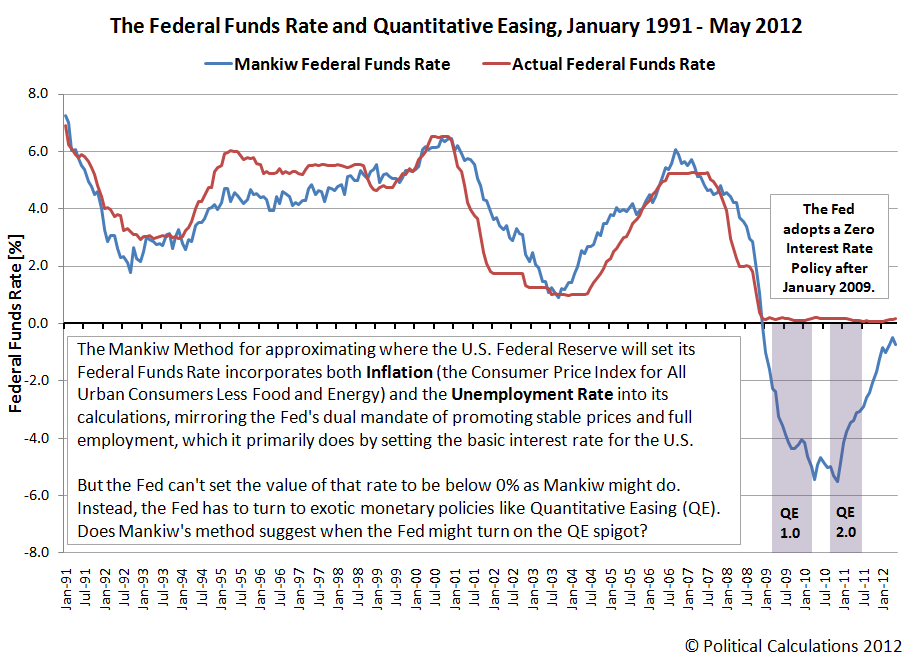 What we first find is the Fed moved very quickly after establishing its Zero Interest Rate Policy (ZIRP) to get QE1 up and going, as might be expected. But more important is what we observe for when the Fed acted to end its first QE program. Here, we find the the Fed stopped QE1 just as it the downward trajectory into negative interest rates that Mankiw's method would suggest to be necessary bottomed out.

That suggests that the Fed responded to an improving outlook for both inflation and employment in the U.S. economy, which we see in the form of Mankiw's predicted Federal Funds Rate rising for several months after that time.

Which brings us to today, at least through May 2012 (the most recent month for which we have inflation data at this writing.) What we find now is that Mankiw's predicted Federal Funds Rate, driven by a deteriorating situation for stable prices and employment in the U.S., has begun to recede back into negative territory in recent months.

What these patterns suggest to us is that while the Fed's Zero Interest Rate Policy remains in effect, a falling Mankiw predicted Federal Funds Rate is perhaps a good signal for anticipating when the Fed might launch a new round of quantitative easing. Going by the timing of when the Fed began its second experience with the policy, the current data suggests that the Mankiw predicted Federal Funds Rate will need to fall a bit further from where it is now and look to be likely to continue falling before the Fed might finally initiate QE3.

If however Mankiw's predicted Federal Funds Rate reverses and resumes rising, we can expect the Fed to do nothing with respect to quantitative easing.

Time will tell, and it will likely be some months yet before the Fed decides to pull the trigger, or not, on QE3.

Finally, aside from their intended effect upon the U.S. money supply, one of the more interesting characteristics of the Fed's QE programs has been that while they ran, they appear to have boosted stock prices about 10-15% higher than they might otherwise have been, which is perhaps the biggest reason why Wall Street is holding out such hope for a new round of quantitative easing these days.