Given recent speculation, Republican vice-presidential candidate Paul Ryan's mention of the company in his acceptance speech last evening and the news that General Motors (NYSE: GM) will shut down production for its troubled Chevy Volt vehicle for the second time this year, that question has become immediately relevant today. 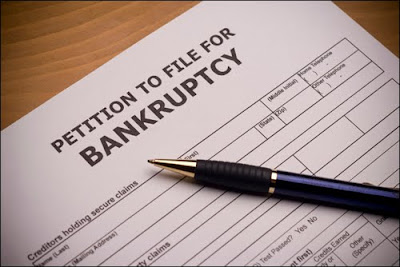 To answer the question, we'll be turning once again to our preferred tool for predicting a company's bankruptcy, the Altman Z-Score.

Here, using data published by the company in its financial reports, we'll measure how distressed GM's situation has become.

This is an exercise we've done with GM's data before. Here, when we first introduced our tool for predicting bankruptcy back in March 2006, we found that GM's Altman Z-score was 0.01.

That value indicates a very financially distressed company, where an Altman Z-score for a manufacturing company like GM would have to be above 2.67 to be considered healthy, and between 1.81 and 2.67 to be considered to be at neutral risk for declaring bankruptcy in the future. Any score below 1.81 indicates that a company is in the danger zone for going through bankruptcy proceedings in the future.

While that Altman Z-score of 0.01 indicated a highly distressed company, it was nothing compared to what we found when we revisited GM's deteriorating financial situation in June 2008, when GM's Altman Z-score fell through the floor and reached -1.35, as its future bankruptcy became inevitable.

From here, we'll pick up the story following what happened after President Obama intervened in what would otherwise have been normal bankruptcy proceedings on the behalf of his political interests and orchestrated the bailout and reorganization of GM using U.S. taxpayer dollars to support them.

Tapping Yahoo! Finance's records of GM's Income and Balance Sheet statements from 2009 through 2011, we calculated GM's Altman-Z score for the bailout year of 2009 and the post-bailout years of 2010 and 2011. Here's what we found:

We next decided to go the extra mile and update GM's Z-Score through its four most recent quarters, which will indicate the company's relative financial health as of 30 June 2012. We've entered the data in our tool below (click here to visit our site if you're reading this post through sites that access our RSS feed):

Running the numbers through 30 June 2012, we find that GM's Altman-Z score is 0.66. The company's financial situation has not improved since the end of 2011 and it remains well in the danger zone for facing future bankruptcy, as the company's post-bailout reorganization appears to have been inadequate to really restore the company to good health.

While that doesn't suggest that the company will be filing for bankruptcy in the immediate days ahead, it does confirm that more reorganization and cost reduction efforts lie ahead for the company in the short term.