Last month, we stumbled across a unique potential indicator for measuring the current health of the U.S. economy: the number of publicly-traded U.S. companies acting to cut their dividend payments each month.

Since then, we now have data for two additional months, July and August 2012. Our chart below, focusing on the number of U.S. companies declaring that they will acto to decrease their dividends in each month since January 2004: 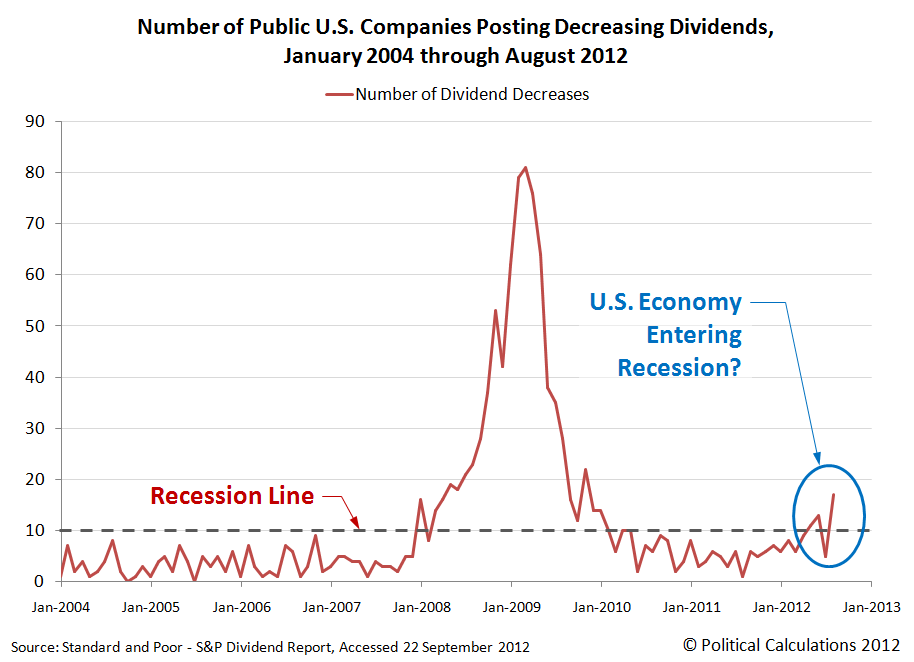 The chart represents data collected and published by Standard and Poor for U.S. companies whose common stock is traded on the American Stock Exchange, the New York Stock Exchange and various Nasdaq stock exchanges. Since January 2004, the data reported by S&P covers the information for anywhere from a low of 2,148 companies (January 2010) to a high of 3,716 companies (December 2011) in any given month.

In the chart, we've identified recession territory as being consistent with more than 10 U.S. companies per month acting to cut their dividend payments to investors. We observe that when the number of companies cutting their dividends in any given month is below that level, the U.S. economy would appear to be in relatively good health.

In August 2012, we find there were 17 U.S. companies that acted to cut their dividends, suggesting that recessionary forces are presently at work in the U.S. economy.