How is income inequality changing over time?

To find out, we've updated our chart showing the trends we find for U.S. individuals, families and households according to their Gini Coefficient as recorded by the U.S. Census since 1994 in the Annual Social and Economic Supplement it provides for its Current Population Survey, where a value of 0 indicates perfect equality (everyone has the same income) and a value of 1 indicates perfect inequality (one person has all the income, while everyone else has none): 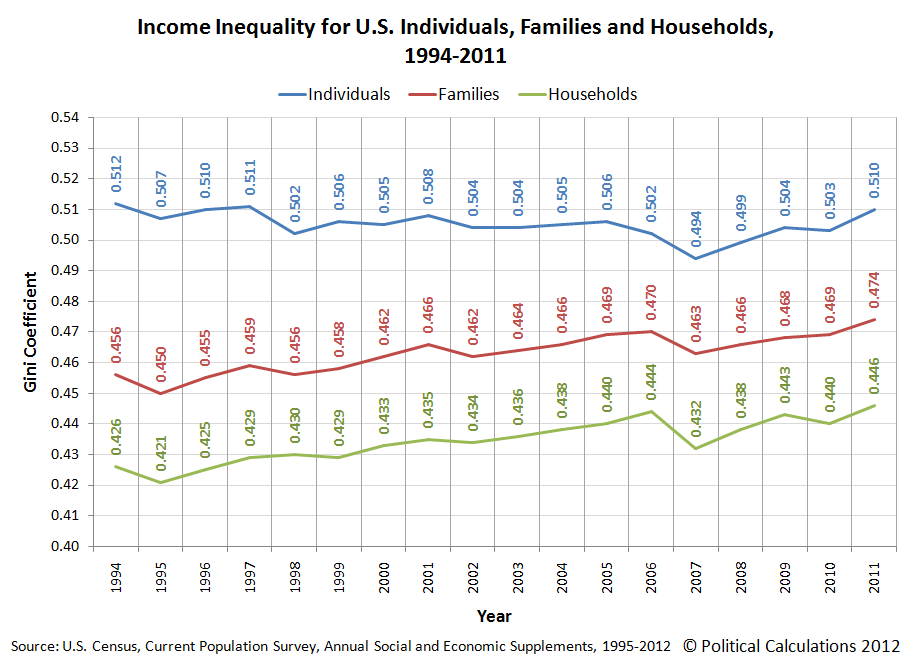 Why only from 1994? That's because the Census only began publishing its data online in an easy to access electronic format after 1993 (note the left hand margin here). The Census has published its older data online, but in the form of scanned documents that require a lot of manual effort to extract the data, which is also not as detailed as the newer versions.

Besides, it's not like the data since 1994 doesn't show the key trends for income inequality in the United States! Going to our chart, here is what we find:

Since income is predominantly earned by individuals (note that your paycheck is made out to you, not your spouse, roommate, parents or children), the only way these patterns can exist is if high income earning individuals are increasingly combining together over time to form families and households, or as is more likely the case, low income earning individuals are becoming less and less successful in forming families and households.

To see what we mean, here are the median incomes for individuals, households and families:

Note that the median income for families is more than twice that for individuals. That indicates that high income earners are indeed combining together to form these social units more often than low income earners.

Now, going back to the apparently unchanging level of income inequality over time for individuals, the only meaningful conclusion from data that can only be driven by economic, rather than social, factors. Russian physicist Ivan Kitov did the heavy lifting in calculating the population distribution functions that apply for the Personal Income Distribution (PID) in the United States. Here's what he found in looking at the same data since 1994:

Figure 4 depicts the population density functions, PDFs, for the years between 1994 and 2010. First, the estimates presented in Figure 1 were normalized to the total population for a given year. Then we reduced the income scale for individual years, i.e. from 1995 to 2010, by the total growth of real GDP. This allows normalizing the curves to the total income, i.e. we reduce all scales to that of 1994. Finally, we normalize the portions of populations in given bins to their widths for individual years and obtain the population density functions. Figure 4 proves that the distribution of personal incomes has not been changing over time in relative terms, i.e. a given portion of population always has a given portion of total income.

Some might say that the Census' data doesn't provide a full picture of the income distribution in the U.S., preferring instead to point to the IRS data for tax collections, which includes the effect of capital gains (much of which may be traced to once-in-a-lifetime events.)

As it happens, Kitov has examined that data too, going back to 1996 (when the IRS began reporting its statistics of income online):

Let’s take a look the data they used to prove the increasing inequality. The IRS measured incomes are usually referred to. Without loss of generality, we have retried “Table 1.1 Selected Income and Tax Items, by Size and Accumulated Size of Adjusted Gross Income, Tax Year 2009”. (Any other year between 1996 and 2009 is good as well.) This Table lists individual incomes in various income bins from $1 to $10,000,000. There are also 8274 reports of income above $10,000,000. We cannot use the latter incomes but definitely can plot the population density function for all incomes below $10,000,000. Figure 2 depicts the whole PID and Figure 3 its high income portion. The higher incomes are well approximated by a power low with an exponent of -3.07. (The difference of ~1.0 from the exponent for the BLS PDF (-4.1) is completely explained by the normalization to the total personal income reported by the BLS. It means that both exponents are identical.) It is likely that the same power law is valid at incomes higher than $10,000,000. Hence, there is no significant deviation (except measurement errors) from the Pareto distribution even at very high incomes and our extrapolation of the BLS incomes along the power law is valid for the calculations of Gini coefficients.

Conclusion: there is no growth in income inequality. Krugman et al. definitely exaggerate. As a Russian physicist, I have no political or any other emotional prejudice to the income distribution in the USA. I just calculate it.