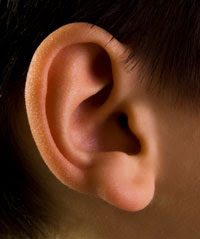 Barbara Walters once asked an aging Katharine Hepburn "if you were a tree, what kind would you be?"

The question has often been derided ever since, but we can't help thinking of that situation because it combines the concepts of a person's age and trees. What if we could determine your age the same way we might estimate the age of a live tree?

Here's how that works. There are parts of the human body that grow in size each year, much like the trunk of a tree does, which can then be measured and the person's age estimated from the result. And no, despite what you might think, we're not talking about measuring your waistline....

Instead, we're talking about your ears! Thanks to a 1997 study published by U.S. Veterans Administration researchers, we have the means to estimate how old a person is from a measurement of the circumference of their ears, and vice versa:

It is generally observed that older people have bigger ears and noses. Cartilage is known to alter in structure with age. We conducted a cross sectional study to verify the trend between age and the size of two cartilaginous structures, ear and nose. A total of 100 young individuals were compared to older individuals with respect to their ear and nose sizes. We found that the greatest correlation coefficient of age was with ear circumference, and the linear regression equation being: Ear circumference = 88.1 + (0.51 x subject's age). Except for the ear tragus, which correlated insignificantly with age, anatomical variables of the ear had higher correlation with age than anatomical variables of the nose. This study supports the view that as people age, their ears get larger, particularly the ear circumference, which increases on average 0.51 mm per year. This enlargement is likely associated with aging changes of collagen. The knowledge from this study allows us to calculate the age of an individual based on ear size: Subject's age = 1.96 x (Ear circumference in millimeters - 88.1).

That second equation is the exact math we've built into the tool below! Just enter the value of your or your subject's ear circumference (the distance you measure around the outside edge of the ears) in either inches or millimeters (we'll sort out which is which, although the default value is given in inches) and our tool will do the math for you!

It's a bit like CSI if you think about it! You can almost imagine yourself as the lead detective investigating a murder ("We didn't find any ID, but we estimated the vic was 25 years old from the size of their ears!..." Ed. You're no Caruso....)

Of course, this is really bad news for people who lie about their age, because now they will be less likely to get away with it. ("38? Ha! Let's measure those ears of yours!..." Ed. No means no.)

We suspect that the hardest hit will be Hollywood actresses, who in addition to doing things like growing out their hair to cover their ears and going to all sorts of other extremes in a vain effort to hide their ages, probably haven't realized that those things attached to the sides of their heads are giving them away.

Really, the only remaining question is which aging Hollywood actress do you suppose will be first in line for some otoplasty after they read this post? Quite possibly, the next hot new trend in cosmetic surgery will be the "ear job"!