As promised, we're updating our chart showing the number of publicly-traded companies that have acted to decrease their dividends through the end of October 2012 - providing what might perhaps be the simplest and best near-real time picture of the state of the health of the U.S. economy (our thanks to S&P for the updated data - that was quick service!): 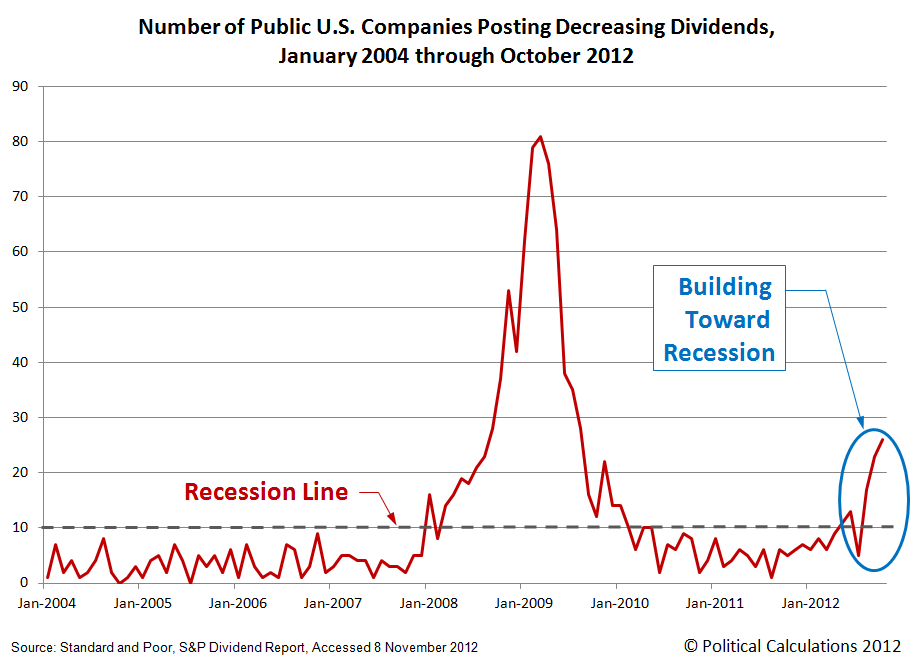 To put that level of dividend cuts for the month of October 2012 into context, we calculated the average number of U.S. companies that have announced dividend cuts outside when the 2007 recession started until after the level of dividend cuts returned to their pre-recession levels for all of S&P's available data from January 2004 through December 2011. We excluded data after December 2011 in our calculation of the average because we wanted a clear sample of data to set a non-recession period benchmark that wouldn't be affected by what has been developing in the economy through much of this year.

Here's what we found. On average, a non-recessionary month will have only four announced dividend cuts during these periods of economic expansion. The most dividend cuts that were ever announced in any of these months that fall outside an official period of recession in the U.S. is nine.

If we then set the value of ten companies per month that act to cut their dividends as the threshold at which a recession in the U.S. is likely to exist, we find that the U.S. economy first dipped into recessionary territory in May 2012, exited briefly in July 2012, and re-entered more deeply into that recessionary territory again in August, going deeper in each month since.

So no matter what you might hear in the mainstream media or from the White House, this isn't a situation that developed overnight because of the aftermath of Hurricane Sandy or the so-called "fiscal cliff". Recessionary forces have been at work in the U.S. economy for many months now....

Our previous posts on the rising likelihood of recession based on the number of U.S. companies acting to cut their dividends, presented in reverse chronological order: