The United States would appear to have entered a new trend for new jobless claims, one characterized by outliers and volatility. Our chart below showing the residual distribution of the number of new jobless claims filed each week shows just how far off from normal things have become since 22 September 2012, which we're marking as the end of the previous trend: 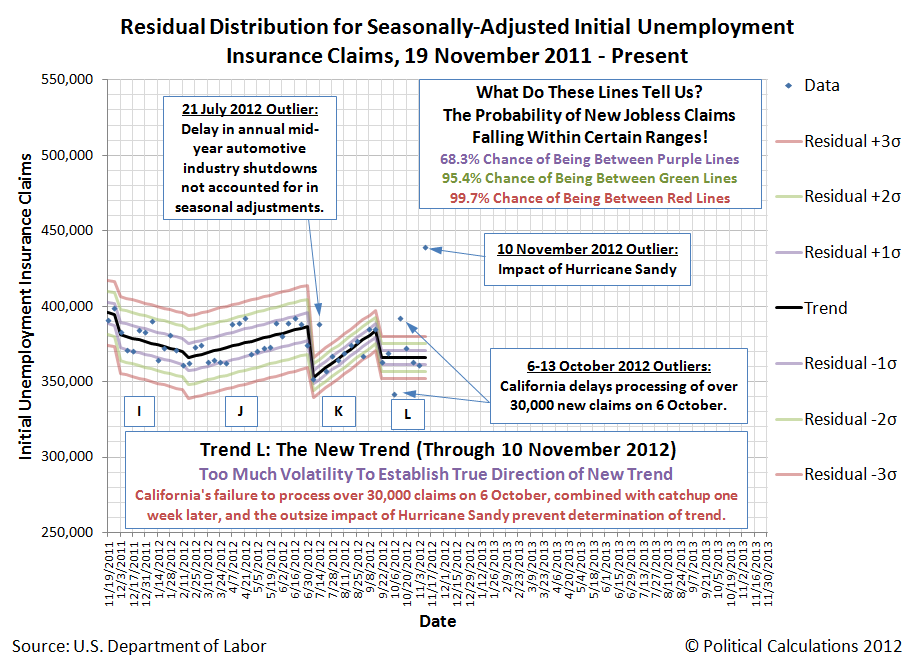 In fact, the data is so volatile right now that we're not able to accurately determine what the real trend in new jobless claims might be. For that, we'll need anywhere from six to ten non-outlier data points, where at present, we only have five (or four, if we discount the first data point marking the shift from the previous trend).

The newest and most extreme outlier is an outcome of the economic disruption caused by Hurricane Sandy. Here, we note that it may be some time before the data settles down enough to reveal its current trend. At present, we're showing a flat trend for the data points that aren't attributable to special causes, but this is a temporary choice on our part to provide a reference from which we can determine the magnitude of the outliers in the data.

What's particularly upsetting is that the two of the outlying points are man-made, the result of the state of California's Employment Development Department's failure to process tens of thousands of new claims filed in the first week of October 2012. That failure then produced an outlier in the opposite direction in the following week, as the state played catch up.

No disciplinary action related to the mishandling of these unemployment insurance claims in California's Employment Development Department has yet been taken.

Those problems are deep and ongoing. The California State Auditor, Elaine M. Howle, issued a report on 13 November 2012 finding that the California Employment Development Department's management of the state's unemployment program still does not meet acceptable performance levels related to core benefits measures, such as the timely processing of unemployment insurance claims.

In addition, California's state auditor found that the agency has failed to implement a number of reforms it specified following a 2010 audit of the agency, but interestingly, noted that the agency made a unique effort to achieve one of them - the one that allowed it to receive $839 million in economic stimulus funds in return for establishing an "alternate base period" for determining benefit eligibility for jobless claim filers, which it put on the fast track and received in July 2011.

So apparently, if you want to get California's Employment Development Department to achieve a goal, such as the timely processing and reporting of initial unemployment insurance claims, one needs to dangle a check with a lot of zeroes on it in front of the state agency's management to provide a sufficient incentive for them to do so.