In Part 1, we pointed out that companies waited a little over a week after the re-election of Barack Obama on 6 November 2012 to begin responding to the guarantee of higher taxes on dividends that would take effect on 1 January 2013. In today's post, we're simply going to point out how much money they've have pulling into 2012 to avoid those higher taxes waiting in 2013 and from where: 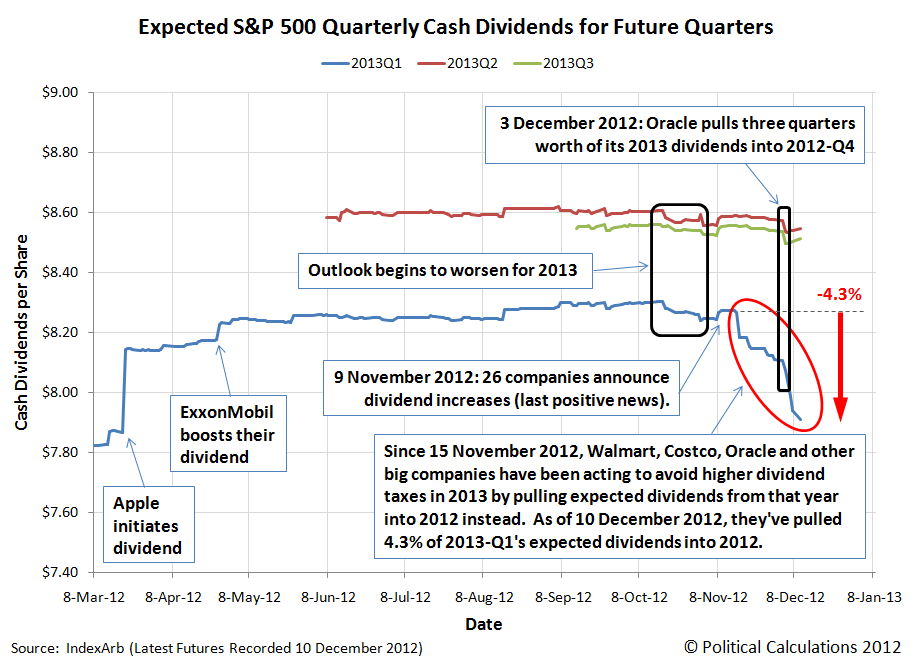 As of the dividend futures data available for 10 December 2012, companies such as Walmart and numerous others have collectively pulled about 4.3% of the total amount of dividends that had been projected to be paid out in the first quarter of 2013 into the fourth quarter of 2012 instead.

While some companies like Oracle have simply pulled ahead the dividends that they had originally intended to pay out in the first, second and third quarters of 2013, at least 123 other companies at this writing have announced they will pay a special dividend before the end of 2012. One of those companies, Costco, has actually taken out a loan to pay a special dividend to its investors before the higher dividend tax rates of 2013 take effect.

These companies are rushing to take these actions because many of their largest shareholders fall into the income range that will be most negatively impacted by the higher taxes on dividends. We estimate that over two-thirds of all dividends go to these individuals, who are often the primary owners or founders of the companies that pay out dividends.