Harvard economist Greg Mankiw offered a unique observation following the release of the findings of a CBO study on the effective marginal tax rates that many Americans really pay on their incomes, after taking into account any government assistance they might receive and the income levels at which their welfare benefits phase out:

The Congressional Budget Office has a new study of effective federal marginal tax rates for low and moderate income workers (those below 450 percent of the poverty line). The study looks at the effects of income taxes, payroll taxes, and SNAP (the program formerly known as Food Stamps). The bottom line is that the average household now faces an effective marginal tax rate of 30 percent. In 2014, after various temporary tax provisions have expired and the newly passed health insurance subsidies go into effect, the average effective marginal tax rate will rise to 35 percent.

Here's a chart from the CBO's report illustrating Mankiw's observation for the effective marginal tax rates that applied in 2012: 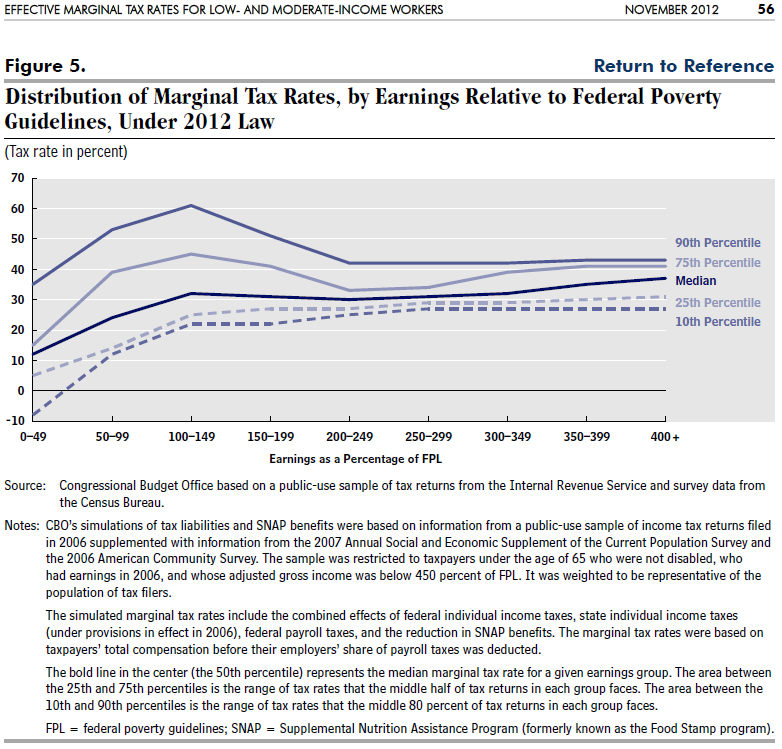 But what can we do with Mankiw's observation? Mankiw offered the following idea:

What struck me is how close these marginal tax rates are to the marginal tax rates at the top of the income distribution. This means that we could repeal all these taxes and transfer programs, replace them with a flat tax along with a universal lump-sum grant, and achieve approximately the same overall degree of progressivity.

So what if we did just that? How might you fare under that kind of tax code? And how much money would the U.S. government collect if we adopted a flat income tax like the one that would seem to be in effect in practice, if not in law?

Let's find out! In our tool below, enter the flat tax income tax rate that you might like to see as well as the amount of a universal lump sum grant that might apply per person. Then enter the unique data that might apply for your household and we'll do the rest, calculating what the data you input would mean for you and for the U.S. Treasury's coffers, outputting the data in the tables below!...

For estimating how much money the U.S. federal government would collect in income taxes, we based our calculations upon the distribution of income for U.S. households in 2010. As such, the amount of tax collections estimated in our tool represents how much income taxes that the federal government might collect following a deep recession in the United States.

Our default data of a 30% flat income tax rate and a universal lump sum grant (or tax credit) of $4,300 per person works out to nearly match the U.S. federal government's actual total tax collections in 2010, which represented about 6.2% of the nation's Gross Domestic Product (GDP) for that year.

To achieve the same results as 2010 with a 35% flat income tax rate, the amount of the individual tax credit must be increased to $5,500.

What that means is that the the U.S. federal government's current income tax rates are more than capable of collecting higher amounts of taxes in a healthier economy. That many in the federal government are so actively pursuing higher effective marginal income tax rates today is really an indication that they don't believe the economy is going to be getting healthier any time soon!