After spiking to a level higher than those recorded during the so-called "Great Recession" in the month of December 2012 in response to President Barack Obama's re-election and the corresponding guarantee of higher tax rates being imposed upon dividends, the number of publicly-traded U.S. companies acting to cut their future dividends remained elevated in January 2013. 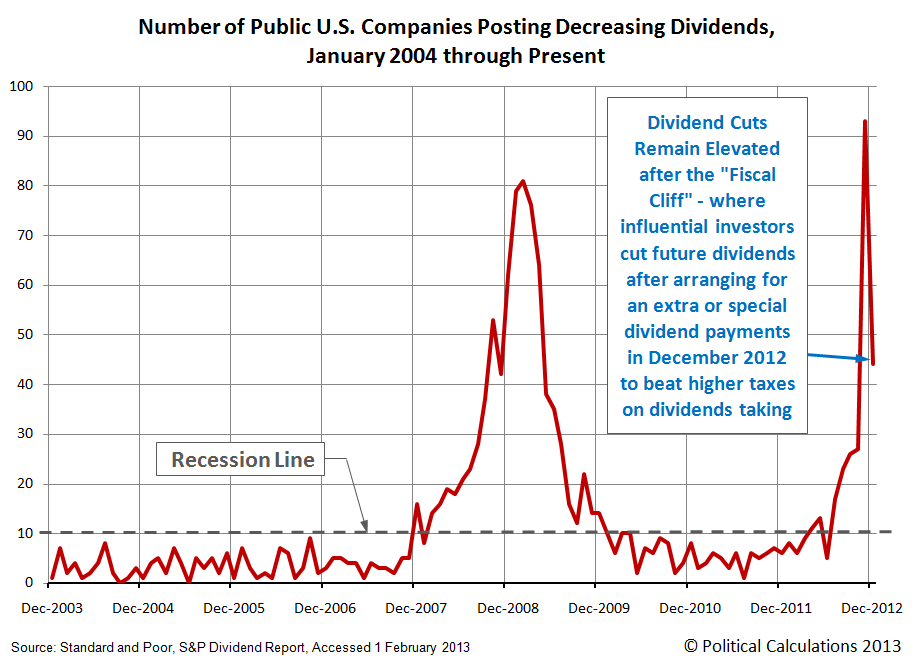 Overall, some 44 companies acted to reduce their future dividend payments in January 2013 - well above the 10-per-month figure that would indicate that recessionary conditions are affecting the U.S. economy.

Taking into account the poor GDP performance of the U.S. economy in the fourth quarter of 2012, we should note that this indicator provided one of the earliest signals that the U.S. economy would be entering a period of near or outright contraction toward the end of 2012.

We do recognize however that this signal was affected in December 2012 by what we would describe as a "noise event, in this case, driven by influential investors at a large number of publicly-traded companies who responded to President Obama's re-election and the corresponding guarantee of higher tax rates being imposed upon dividends by either accelerating future dividend payments into 2012 or by making special or extra dividend payments before those higher tax rates might take effect in 2013.

Since many of these companies would then not be able to pay out the level of dividends in 2013 that they had previously promised after making these special payments before the end of 2012, they used the opportunity of their announcements that they would pay out extra dividends to also announce cuts to their future dividends, which is why we see such a spike in these announcements in December 2012.

We suspect that the number of dividend cut announcements being made in January 2013 likely includes a number of these companies in a similar situation, who pulled the money they were setting aside to pay out in 2013 into December 2012 instead, but who delayed the announcement of future dividend cuts until this past month. We do expect the number of companies acting to cut their dividends will remain elevated through much of quarter, however we also note that these additional dividend cuts are coming on top of an already elevated figure due to the deterioration of the U.S. economy in the second half of 2012.

Looking at the other data in S&P's dividend action report [Excel spreadsheet], we find that January 2013 saw a record number of companies (263) announce dividend increases in January 2013. The previous record of 246 companies acting to increase their regular dividends in a single month was set in February 2007.

It occurs to us that this new record for the number of dividend increases in a single month might also be a consequence of the so-called "fiscal cliff" tax hikes.

To understand why, we have to consider the tax hike situation that many influential investors faced in December 2012. Here, unless the U.S. Congress and President Obama came to an agreement on setting dividend tax rates in 2013, dividends could have been taxed at a rate as high as 43.4% - the same as would apply for regular, previously untaxed income (dividends are paid out by companies after the net income from which they are paid have been subjected to corporate income taxes). It was the risk of being subjected to a tax rate nearly three times as high as the 15% dividend tax rate that applied in 2012 that drove much of the year-end activity related to dividends in 2012.

But a deal was struck between Congress and the President early in January 2013, which set the effective tax rate for both dividends and capital gains at 23.6%. That tax rate is much lower than the 43.6% rate that applies to top income earners, which now provides an incentive for these high-income earning individuals to receive a larger share of their payments in the form of dividends from their companies (these the the influential investors to whom we keep referring!) And that's why we're now seeing a record number of dividend increases.