Political Calculations
Unexpectedly Intriguing!
March 25, 2013
Playing the "What If" Game with the S&P 500

Aside from relatively minor noise in the market, the S&P 500 is continuing to behave as expected.

To underscore that point, let's revisit the "what if" game we started playing three weeks ago, following the Italian election fiasco noise event, when the S&P 500 had closed the previous Friday, 1 March 2013 with a value of 1518.20.

Playing "what if", we asked the question: "What if investors continue to focus on 2013-Q2 in setting today's stock prices and the change in the expected growth rate of dividends for that quarter stays constant with where it is today. How much would the value of the S&P 500 have to change on average per trading day to converge with that level by 21 March 2013 - the last day we have shown on our chart?"

We came up with an average increase of 2.75 points per trading day.

On Thursday, 21 March 2013, the market responded to a new noise event, with the S&P 500 pacing the reaction of global markets to uncertainty related to the EU's bailout of Cyprus' banks that day. But, that noise event was short-lived and the market recovered to close at 1556.89 on Friday, 22 March 2013.

So, aside from relatively minor noise in the market, the S&P 500 is continuing to behave as expected. Here is where the market stands at present: 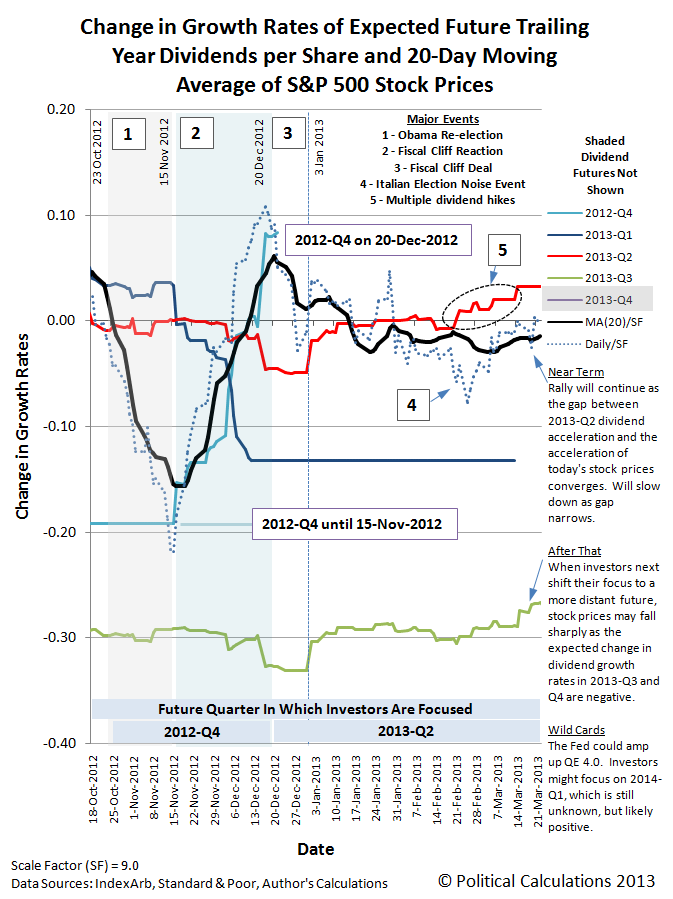 This will be the last updated version of this chart that we'll be featuring for some time.

In the meantime though, here are three thoughts to consider for this week. First, not all noise events have a negative effect on stock prices. Second, following up a seemingly random comment of ours last week, you don't have to wait for a 150 point decline in the value of the S&P 500 for a clear sell signal. There are other, less clear ones that you might also consider!

And third, yes, what we've just demonstrated over the last three weeks is nearly impossible. We just have a knack for being able to execute that sort of thing.

We'll explain more of that second thought later this week....