When should you sell your stocks?

Not long ago, we indicated that a 150 point decline in the value of the S&P 500 would be a "clear sell signal" for investors.

But then, a week later, we suggested that there might be a less clear sell signal, one that could be used to shrink the amount of a haircut that an investor would have to take when reacting to a pending break down in stock prices. After all, given today's stock prices, a 150-point plunge in the S&P 500's index value would represent nearly a 10% haircut for an investor. Isn't there some way to reduce the size of the hit that would allow an investor to keep more of the gains in the value of their shares after the stock market has started to turn south?

Well, sure there is! An investor could determine some other price level that if stock prices were to fall below, would signal them to sell their stocks.

Both possibilities can cost real money. In the first case, the investor not only rings up transaction costs (commissions, fees, etc.) from executing the trades to exit their positions, they also lose out on the gains that the market can still deliver before they might recognize the situation and re-enter the market, where they will pay those transaction fees all over again. In the second case, they are committing to either lesser gains or larger losses as the cost of not acting soon enough.

Today, we're going to discuss a method by which investors might set a sell signal for themselves to avoid these issues, that might minimize the pain of loss value in their investments without losing out on potential gains by reacting either too soon or too late.

But to do that, we're deliberately going to do something wrong. Again!...

"All Models Are Wrong, But Some Are Useful" 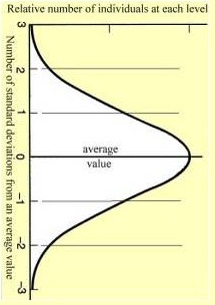 Those are the immortal words of statistician George E. P. Box, who just passed away on 30 March 2013.

What we're going to do that's wrong is to assume that the relationship between stock prices and their underlying dividends per share can be described by a Gaussian statistical distribution, a.k.a. "the normal bell curve distribution".

Why that's wrong is because stock prices have been repeatedly demonstrated to not follow that kind of distribution.

There are however relative periods of order in the market where a statistical hypothesis test cannot rule out the possibility that the variation of stock prices with respect to their underlying dividends per share are following a normal distribution. Such as when both stock prices and trailing year dividends per share are closely coupled, meaning that both are generally moving in the same direction (and typically when they are both increasing in value).

At those times, using the math of statistics to model the variation of stock prices with respect to dividends per share becomes not necessarily wrong, but useful.

So that's what we're going to do!

The Current State of Order in the Stock Market

Our chart below shows the current state of order in the U.S. stock market, which has existed since 4 August 2011, following the deflation phase of the QE 2.0 Bubble, which occurred in July 2011. 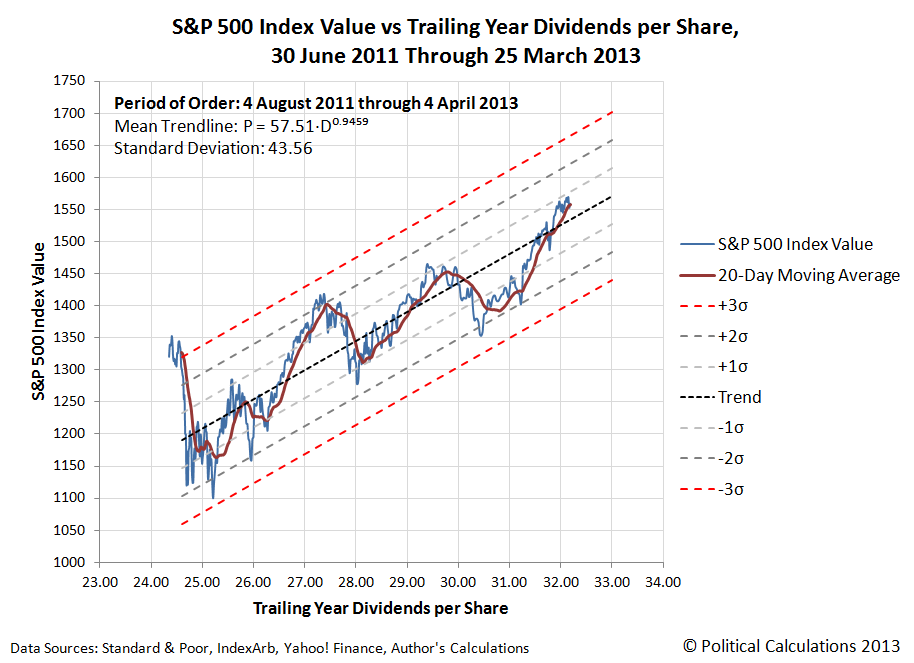 Here, we've plotted the daily closing value of the S&P 500 on the vertical axis against the trailing year dividends per share for the index, shown as increasing in equal increments for each trading day during the quarters in which they were recorded on the horizontal axis. We then used regression analysis to calculate the mean trend line using the power law relationship between these two factors (the upward curving black trend line), and also the standard deviation of the data, for which the multicolored parallel curves are one, two or three standard deviations away from the mean trend curve. 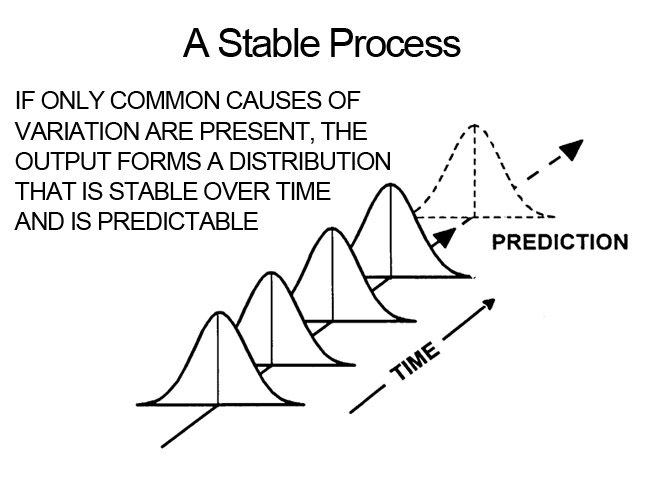 But there's something else - we see that there are three distinct rallies in stock prices during this overall period of relative order in the stock market. What if we zoomed in on each these rallies and repeated this exercise?

When we zoom in on just the three major rallies shown in our previous chart, the variation in stock prices looks really similar to what we saw in our bigger picture. That's because stock prices are fractal in nature - no matter what the scale in which we show them, they look and appear to change similarly, just on a different scale.

We're going to exploit that property in determining when to sell stocks. Our next chart looks at the first rally shown in our first chart, which covers the rally that ran approximately from 19 December 2011 through 2 April 2012: 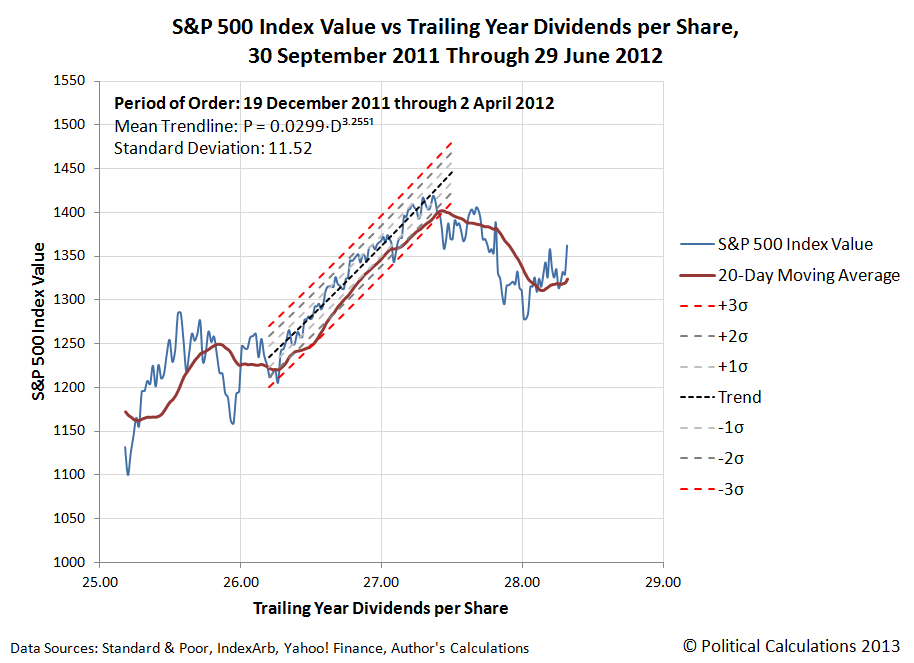 In this chart, we see that the rally for the S&P 500 rose over 1419 (on 2 April 2012) before breaking down quickly, which occurred when stock prices dropped below the lowest "normal" boundary of 1394 for the market's level of dividends by 5 April 2012. An investor would have had a haircut of 2.6% of the market's peak value, or just 37 points of the index' value.

Taking this action would have allowed our hypothetical investor to sidestep what became a 10% loss in the value of their holdings over the next two months time as the order of the rally broke down, before the next rally got started.

Taking 4 June 2012 as the beginning of our next rally, we find the same technique finds a good exit point. 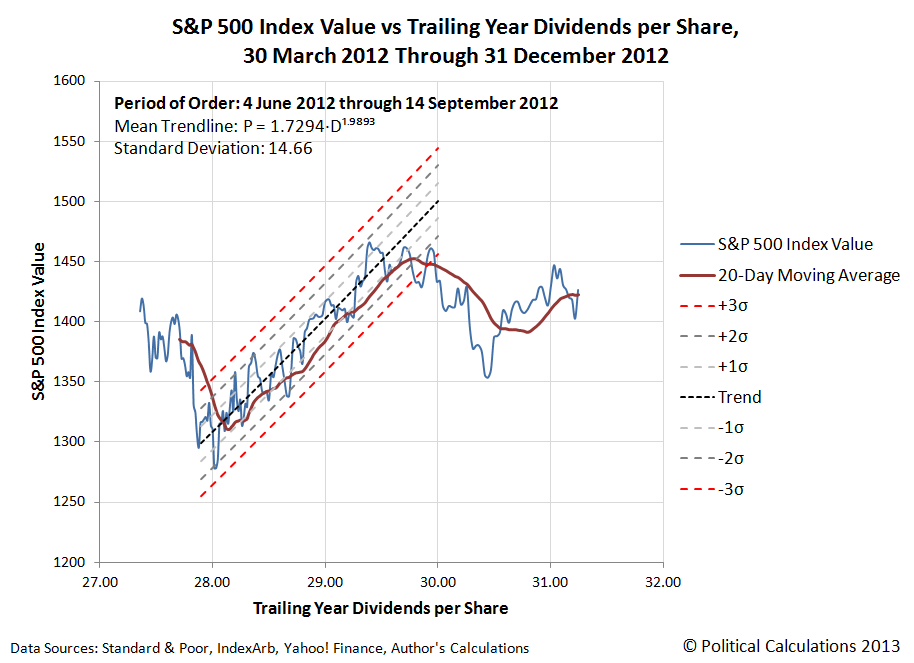 Note the extent of the volatility during this particular rally - setting too narrow a margin could easily have ejected our investor too soon to be able to maximize their gains from the rally. 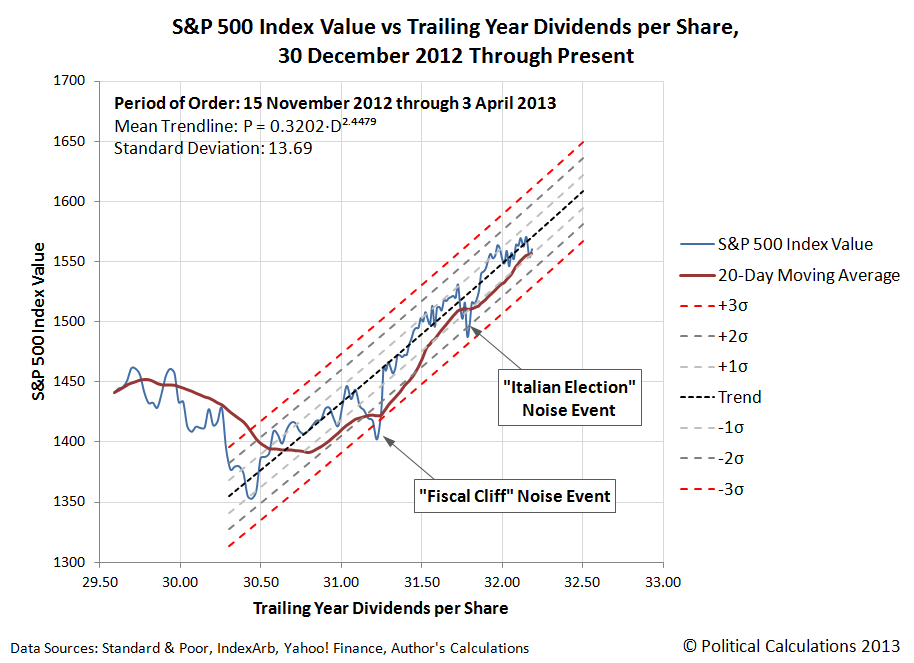 We've also pointed out two major "noise" events in the stock market - the "fiscal cliff" crisis at the end of 2012 and the market's reaction to the "Italian election" fiasco in February 2013.

The "fiscal cliff" noise event brings up a good question - why wouldn't an investor have bailed out of the market at that time?

The answer is that there was a lot more volatility in stock prices in the period from 15 November 2012 through the end of 2012 than has been the case since. That higher level of volatility translated into a larger standard deviation at the time, which was large enough for the range of so-called "normality" to include the fiscal cliff noise event. Investors using this method would not have received a sell signal!

Since then however, the variation in stock prices has been considerably less, with the range of normality defined by the standard deviation of stock prices now narrower, which is why the fiscal cliff noise event now appears as the outlier it really was.

And that's it - now you know when to sell your stocks following a rally in stock prices - at least through the end of this month! As a bonus, we've provided enough information for you to project your personal sell signal through the end of June.

But then, maybe the real trick is figuring out when you should buy....