Political Calculations
Unexpectedly Intriguing!
May 23, 2013
In Which We're Right. Again.

We've had some fun over the past few days in forcing Seeking Alpha's editors to rewrite portions of our posts to remove our assessment of the intellectual quality of commentary provided by several of that site's more confused commenters to our posts so their feelings wouldn't be hurt, but today, we're just going to rub their faces in it.

Consider this comment from one commenter, who was troubled by one particular passage in a recent article:

You are correct, ironman: "this confuses some Seeking Alpha's commenters"

In fact, I dare anyone to explain "We can observe this transition directly in our chart below as the movement of the daily and 20-day moving average of the change in the rate of growth of stock prices from the red line representing 2013-Q2 to the green line representing 2014-Q1, which corresponds to the change in the year-over-year rates of growth of the trailing year dividends per share expected for each of these quarters."

I'm not saying the article is wrong, just that it's incomprehensible.

So it's not like we didn't provide a decoder. It's more that it was ignored....

That was one of the more intelligent comments we saw. Later in the comments thread, we came across this gem from another commenter, who at least recognizes their naivety:

Call me naive, but how do you know investors have shifted their focus from 2nd quarter's dividend rates... to expectations for 1st quarter 2014 dividend rates?

Is this standard knowledge?

Or is it in that first chart that shows dividends moving average compared to stock prices? If so, I see the break upward of stock prices. I don't see anything that correlates or gives a hint that it's a shift in focus by investors to next year's dividend rates.

How do we know? Other than seeing that black line shift from pacing the red line, representing 2013-Q2's dividend rates, to pace the green line instead, representing 2014-Q1's dividend rates? Or any of our previous articles in which we've discussed this quantum-like characteristic of stock prices that are being driven by expected future dividends?

As for being standard knowledge, well, apparently not among Seeking's Alpha's more confused commenters....

But the best was yet to come! Behold the most cortically-subilluminated comment we've seen to date!

Total bafflegab and gobbledygook. As an investor I have not shifted my focus as the author suggests. I am not clairvoyant, but I doubt most investors have, as the author claims. Plus, his insult of commenters to a previous article of his/hers suggest personal insecurity. Author, are you here to educate or to build ego?

For some reason, you are ranked 1 in real estate. Not sure what it means, but it suggests some sort of weakness in SA's rankings. Especially since you have a grand total of 273 followers.

To paraphrase you, it looks like investors have shifted their focus to better authors and empirically supported charts. Best wishes, however.

Thanks to the efforts of Seeking Alpha's intrepid editors, that's a commenter who really had to work hard to get their feelings hurt, as the claimed insult appears nowhere in our articles appearing on Seeking Alpha!

Speaking of which, our articles appear on Seeking Alpha because Seeking Alpha's editors like them and requested permission to re-post them. Since we post anonymously, it's pretty clear that we don't exactly care about ego, and since we're not compensated by Seeking Alpha at all, much less to educate its site visitors, we're not that concerned about fulfilling that function either.

As for being "ranked 1 in real estate" on Seeking Alpha, how cool is that?! Especially since we've only written a handful of articles on real estate in the past year, all in recent months, which means that we've had some sort of impact in generating a migration to better authors and empirically supported charts for that particular topic at Seeking Alpha. Thanks for letting us know - we'd say it's pretty ego-boosting, but then, we still don't care!

Other criticism in Seeking Alpha's comments to our article there was equally off base. Consider this sample:

There has been no mention of a possibility of a correction, market has been on a short term rally since Oct'Nov 2012 and this also must be accounted, so there is a possible correction when buyers through this last rally begin taking profits and fooled people that bought late are screwed.

Hmm. Somehow, this commenter completely missed this quote of ours from our article that appeared at Seeking Alpha on Monday, 20 May 2013:


Now that the pace of acceleration of daily stock prices has risen above the green line on our chart above, we can expect the recent rate of growth to taper off, and even to fall following this period of transition, as there is no fundamental support for stock prices to remain significantly above this level for any sustained period of time, absent some action by the Fed.

Guess what happened on Wednesday, 22 May 2013, around 2:00 PM, after the Fed released minutes of its recent meeting in which the Fed decided that they would not increase their purchases of Treasuries and Mortgage-Backed Securities as part of their current quantitative easing program and would instead continue purchasing them at their current levels.... 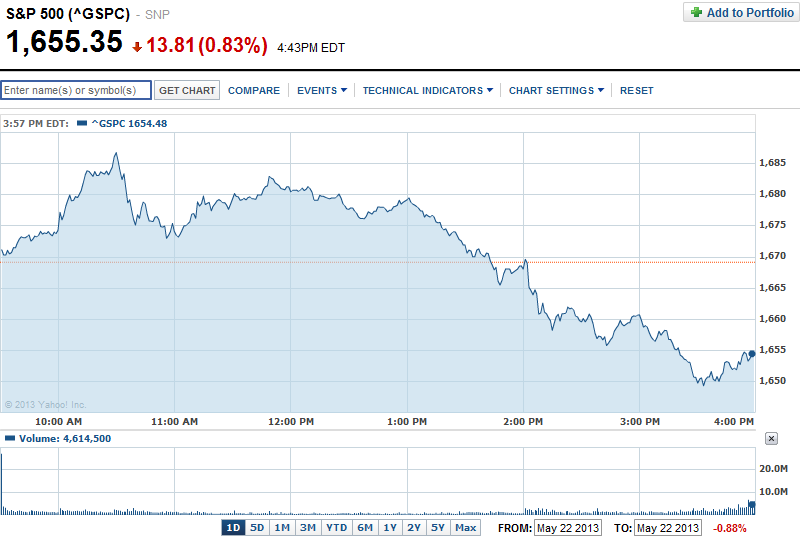 You have to admit - we were right. Again!

I'm not saying the article is wrong either. It is based on some airy fairy ideation couched as fact. I agree that it is incomprehensible. I am glad it is, for if it made any sense, some poor sucker might base investments based on it. Bleh.

And a second comment on the same vein, where the Seeking Alpha commenter also doubts our ability to anticipate future changes in stock prices:

Unfortunately the article appears to be an prima facie example of the logical fallacy that correlation equals causation. A lot of effort (and reader time) could have saved by just sticking with tea leaves.

There were more comments, but fortunately for our reading experience, they were much more intelligent than the ones we covered in this article today. We'll close by sharing the most honest observation, which we respect:

I am reading a book about cosmology that is easier to understand.

More Seeking Alpha commenters should recognize their cognitive limits. It's not that you're as dim-witted as the above examples suggest, it's more that you don't know what you need to understand to deal with it and aside from this week's break, we're not going to slow down or stop what we're doing to get you up to speed. Just ask a mathematician about Mochizuki's proof of the ABC Conjecture and recognize that you're in the same boat. Fortunately for you however, we've done all our intermediary work live, in real time, online, so you can simply go through our archives to see how we've gotten so far ahead of you.

Yo, Mochizuki! Try this with your guys - it's therapeutic!