For a lot of U.S. families, there are only a handful of weeks left before their kids' school lets out for the year and they can finally get started on the serious business of going on a summer vacation!

Many will choose to visit a theme park, where they can ride ferris wheels and roller coasters and other entertaining attractions. Which brings us to what maybe is the strangest U.S. patent we've ever come across: U.S. Patent 6,168,531. Which features a simulated soup bowl entertainment attraction for theme parks.

Really. We can't make this stuff up. Here's what the inventors, William George Adamson and Donald Lewis Updyke, Jr., both of southern California, had to say about the peculiar problem their invention addresses:

Interactive entertainment attractions are generally in the nature of a video game apparatus in which a participant manipulates buttons and levers, or otherwise imparts physical movement of a device, to cause changing visual and audible effects.

Although video games differ in the visual and audible presentations, the methodology, i.e. activities of the participants, are predictable and remain basically the same, leading to familiarity, boredom and disinterest. Moreover, such entertainment attractions typically limit usage at any point in time to one or two participants.

Accordingly, there is a need in the art for an entertainment attraction alternative which departs from the usual button pushing, lever bending video game type of activity, and which permits several participants to take part in the attraction activity within a relatively short period of time.

And what better way could there be for several participants to interact with an alternative entertainment attraction in a relatively short period of time than for the main interface between participant and attraction to be a simulated bowl of soup? Complete with a fog generator to create the illusion of steam coming off the fluid inside!

Triggered by sensors that pick up the movements of the participants, the soup bowl attraction will change the image that is projected onto its simulated steamy soup surface and even play different sounds to make it a fully interactive experience. 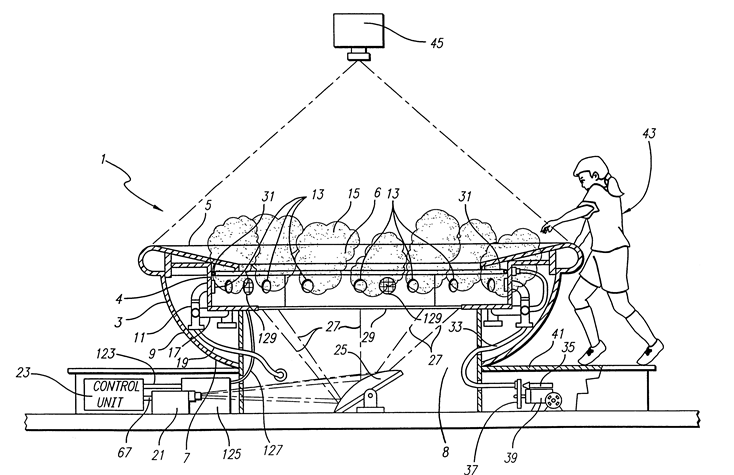 In case you're wondering, Item 43 is the "visitor or guest participant", who is a vital component of the invention, as they provide the interactive element for the simulated soup bowl entertainment attraction.

But that's not even the strangest part of the patent. The thing that sends it over the top is that the invention is assigned to Japan's Sony Corporation (through its Burbank, California subsidiary Hyper Entertainment.)

What that means is that this idea was considered to be of great enough commercial value by a global corporation that it chose to go to the expense of filing and maintaining a patent on it, if for no other reason than to prevent its competitors from being able to go forward and produce their own simulated soup bowl entertainment attractions!

Sadly, that might explain why so many other global firms have not yet stepped forward to compete in this important new area for user-interface technology.

We did say that we're not making any of this up, right? But then, perhaps it was all just an excuse for sharing this classic Seinfeld clip:

Which makes it all worthwhile!

Our Best Essays on the Topics of Technology and Innovation