In doing that, the S&P 500 completed the transition it began on 1 May 2013, as investors shifted their forward-looking focus from the second quarter of 2013 to the first quarter of 2014 in setting their expectations for the sustainable portion of future earnings growth for the stock market (a.k.a. "future dividend growth".) We can observe this transition directly in our chart below as the movement of the daily and 20-day moving average of the change in the rate of growth of stock prices from the red line representing 2013-Q2 to the green line representing 2014-Q1, which correspond to the change in the year-over-year rates of growth of the trailing year dividends per share expected for each of these quarters. 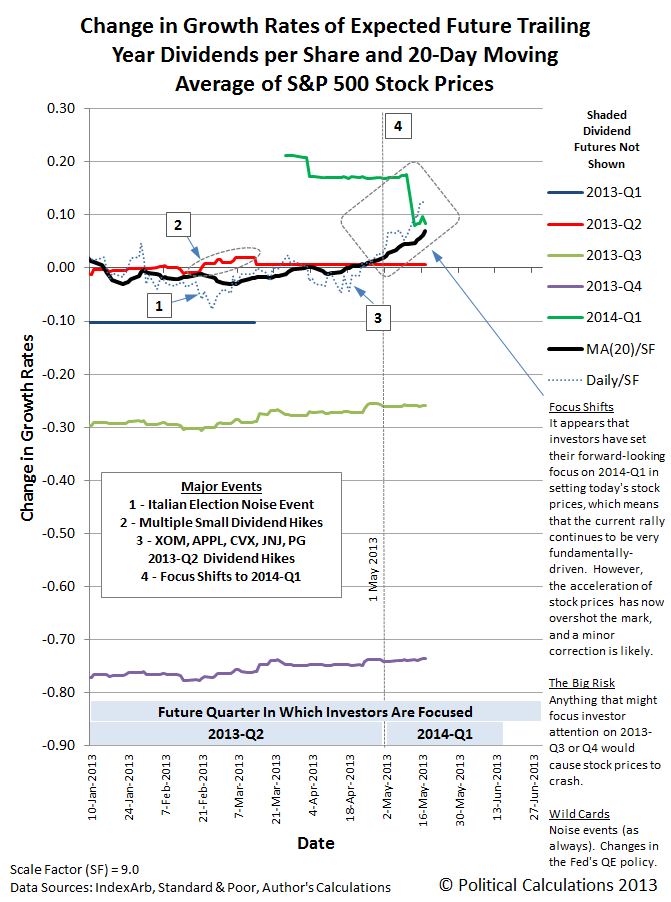 Now, even though this confuses the more dim-witted among Seeking Alpha's commenters, this latest transition of investor forward-looking focus from 2013-Q2 to 2014-Q4 follows very similar transitions that have taken place periodically since the end of the Federal Reserve's QE 2.0 program at the end of June 2011. Following the deflation of that mini-bubble in the weeks that followed, stock prices have since been very fundamentally-driven with little noisy exception, with the pace of acceleration of stock prices matching up with the changes in the growth rates of trailing year dividends per share for discrete future quarters.

The transitions of investor forward-looking focus from one future quarter to another, combined with changes in the growth rate of dividends expected in quarters where investors have focused their attention, accounts for nearly all but a small portion of the changes in stock prices that have occurred in the post-QE 2.0 period.

These periods of transition in forward-looking focus also mark the greatest uncertainty we have in anticipating the direction and change of stock prices over time, outside of significant noise events such as the Federal Reserve's quantitative easing programs marking major changes in their acquisition rates of U.S. Treasuries. That was definitely the case with QE 2.0, when the Fed ramped up then discontinued an interest-rate lowering bond-buying program, which resulted in the mini-bubble for stock prices.

However, that has not been the case with QE 3.0, where the Fed ramped up only its purchases of Mortgage Backed Securities in September 2012, or for QE 4.0, which began in December 2012, where the Fed maintained its ongoing acquisition rate of U.S. Treasuries that it set in its "Operation Twist", but stopped selling off an equal value of holdings that was the other part of that operation. The lack of change in the Fed's basic acquisition rate of U.S. Treasuries for both QE 3.0 and QE 4.0 is why these latest quantitative easing programs have had no significant impact upon stock prices.

Now that the pace of acceleration of daily stock prices has risen above the green line on our chart above, we can expect the recent rate of growth to taper off, and even to fall following this period of transition, as there is no fundamental support for stock prices to remain significantly above this level for any sustained period of time, absent some action by the Fed.

That brings us to this week, where a lot of focus will be upon the pronouncements of the Federal Reserve. At present, there are a number of indications of recessionary conditions being present in the U.S. economy, which the Fed might attempt to offset by amping up its purchases of U.S. Treasuries. The market's response to such a noise event would be the only reason for the latest rally in stock prices to continue at their current rapid pace of escalation, as the earnings season for the second quarter of 2012 is nearly over, leaving little time left for corporate earnings announcements and changes in dividend policies to affect stock prices.

Speaking of which let's take a closer look at that microtrend rally. Our following chart shows the upward rise of stock prices since 15 November 2013, nearly one month before the Fed began its QE 4.0 program, with respect to the S&P 500's trailing year dividends per share: 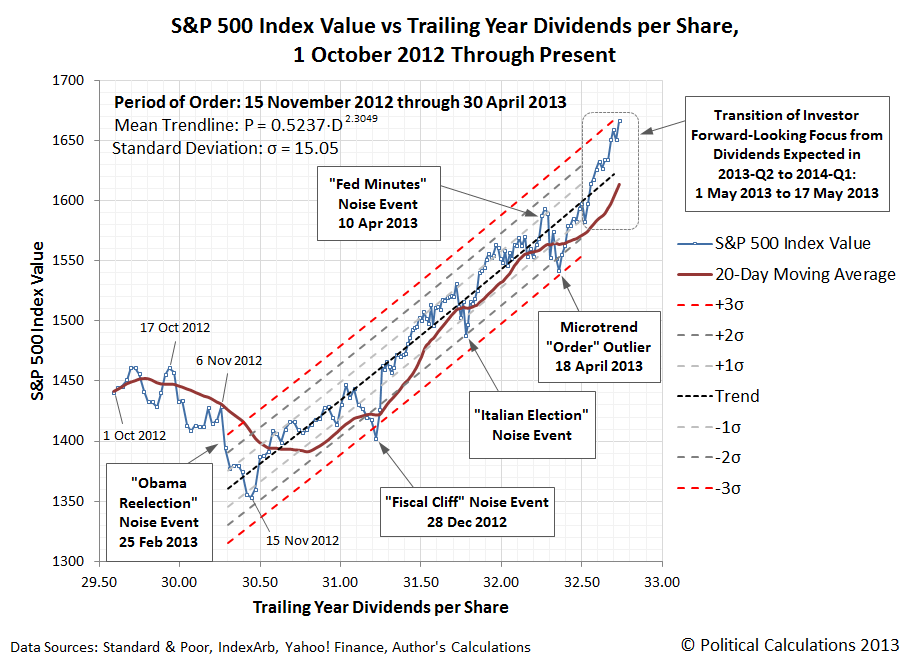 We mark the beginning of the newest microtrend rally in stock prices from 1 May 2013, which coincides with the divergence of stock prices from the level that is defined by the dividends that are expected to be paid by the end of 2013-Q2. The new microtrend rally is characterized by an even more rapid escalation rate for stock prices than seen in the period from 15 November through 30 April 2013, which is also something that we associate with transition periods in where investors set their forward-looking expectations.

We'll take a closer look at the longer trend in stock prices later this week....