In May 2013, the trailing twelve month average of median new home sale prices in the U.S. continued to inflate, reaching an initial value of $253,033. This marks the fourth consecutive month in which a new record has been set for this particular statistic, which has risen by $2,058 from the previous month's figure.

Meanwhile, the trailing twelve month average of median household income for May 2013 has come in at $51,351, rising by $50 from the figure recorded in April 2013. This value is still short of the record of $51,444 set for this statistic in December 2008, just before the large scale losses of high paying jobs in the U.S. automotive industry took place. [Prior to December 2008, job losses for the recession starting in December 2007 were concentrated among positions that were typically held by young adults and teenagers, where increases in the federal minimum wage in 2007 and 2008 were primarily responsible for the seemingly permanent elimination of hundreds of thousands of these low-income earning positions.]

Our chart below shows the trend for the non-inflation adjusted twelve-month trailing averages of both median new home sale prices and median household income for each month since December 2000: 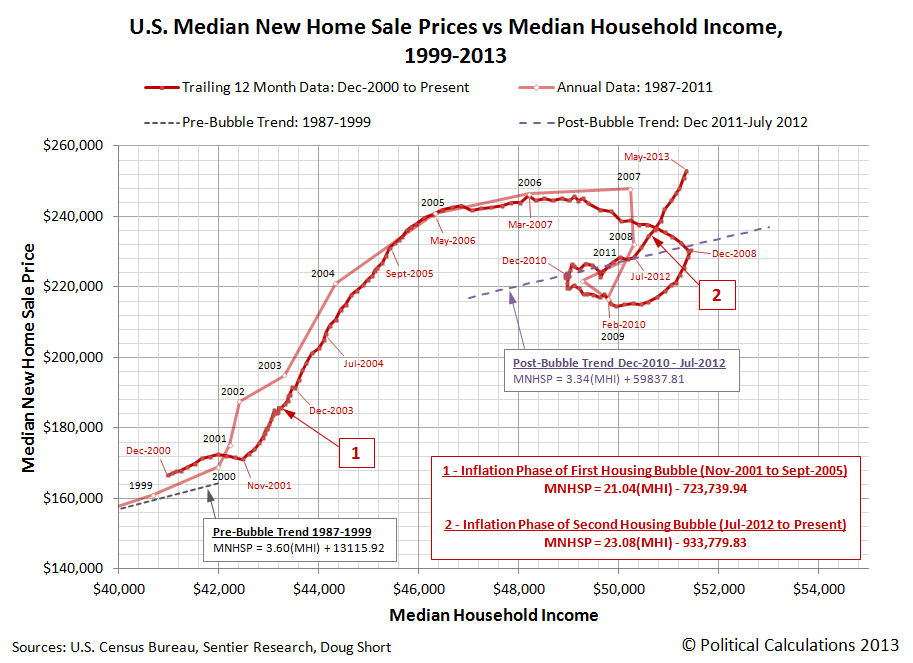 With the latest update to its Excel spreadsheet detailing median new home sale prices, the U.S. Census has revised its figures for a number of previous months upward. With that updated data, we find that since the second U.S. housing bubble began to inflate in July 2012, the median sale price of new homes has increased on average by about $23 for every $1 increase in median household income. This represents a faster average pace of growth than was recorded during the inflation phase of the first U.S. housing bubble.

The Spark for Inflating the New Housing Bubble

As with the first U.S. housing bubble, which sparked off its inflation phase back in November 2001, the proximate cause of the second U.S. housing bubble is nearly identical: a sudden and very large influx of money flowing into the U.S. housing from the sale of investments in other markets.

In 2001, the dominant source of those funds came from the sale of stocks, whose prices had been originally bid up during the inflation phase of the Dot-Com Bubble from April 1997 to August 2000, which investors first mostly held and then began to sell off in great quantitites in 2001. In 2012, the dominant source of funds flowing into the U.S. housing market came from hedge funds and real estate investment firms, such as the Blackstone Group, which made a strategic decision enter into the residential real estate market using the proceeds it was accumulating from the sales of their previous investments in corporate real estate after good opportunities in that market began to become hard to find.

The influx of these funds into residential real estate markets led to the depletion of the available inventory of homes to historically-low levels in many of these markets, which in turn, led to sharp increases in U.S. new home sale prices compared to more sustainable growth rates, both in 2001 and in 2012, even though investors in both 2001 and in 2012 were primarily focused on acquiring existing homes, and distressed properties in particular in 2012.

That's because new homes are, virtually by definition, at the margin for all real estate markets. Their prices are therefore especially sensitive to changes in the levels of both supply and demand in the overall market.

And that's another reason why our method of tracking median new home sale prices with respect to median household income is so effective at detecting the inflation or deflation of potential bubbles in housing markets in their earliest phases. If we see median new home sale prices racing far ahead of median household income, it's a pretty clear indication that something has upset the established equilibrium within the U.S. housing market.

Speaking of which, we'll close with an updated version of our chart showing the long-term view of what established equilibriums for median new home sale prices really look like in the United States: 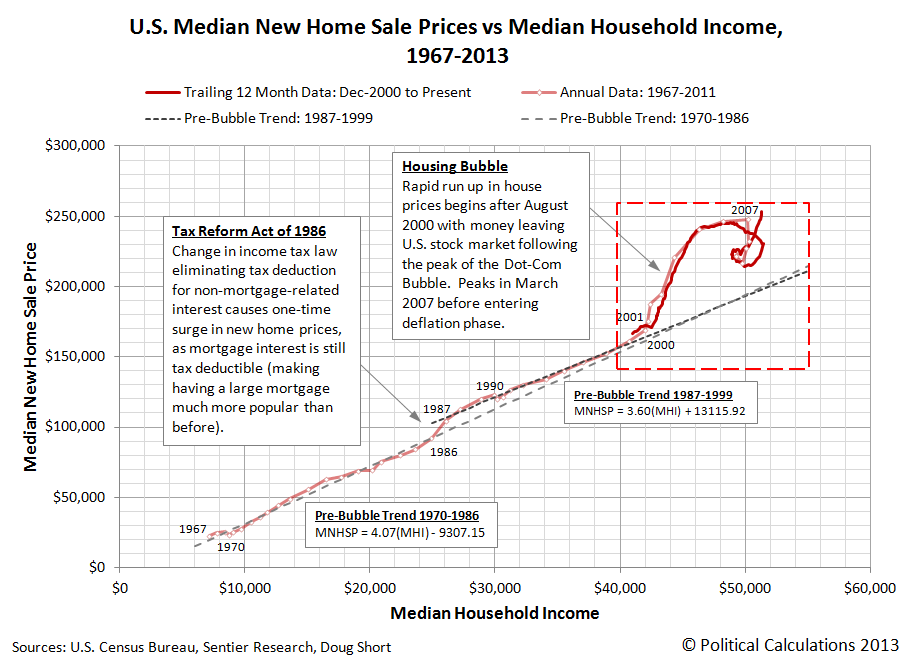 Since 1967, median new home sale prices in the U.S. have typically increased by anywhere from $3.34 to $4.07 for every $1 increase in median household income in the absence of any periods of bubble inflation or deflation in U.S. housing markets.

Sentier Research. Household Income Trends: May 2013. [PDF Document]. Accessed 26 May 2013. [Readers should note that we have converted all older inflation-adjusted values presented in this source to be in terms of their original, nominal values (a.k.a. "current U.S. dollars") for use in our charts, which means that we have a true apples-to-apples basis for pairing this data with the median new home sale price data reported by the U.S. Census Bureau.]