Thanks to the efforts of the Food Network, many Americans have become familiar with the gourmet food truck craze taking root in many cities across the United States.

What they might not know is that the economics of doing business is really behind the phenomenon. Compared to operating a restaurant at a fixed location, food trucks:

There are also a lot of challenges that can go along with owning and operating a food truck, which shouldn't be underestimated.

But all this just sets the stage for a new development that we want to consider: mobile factories.

It's natural to think of this possibility these days thanks to the advances of 3-D printing technology, but we're thinking more old school. What about putting a factory on wheels to support limited production runs for small producers, who haven't yet developed the revenue stream or the creditworthiness to invest in their own permanent production facilities to produce the kind of stuff for which 3-D printing just isn't cost competitive?

Perhaps something like a mobile cannery for local craft brewers? 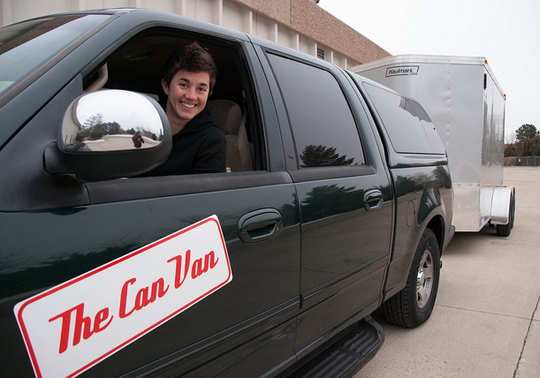 Gives a whole new meaning to the idea of what a beer truck can be now, doesn't it?

The mobile solution might be optimal for these kinds of producers because it's unlikely that the local canning and bottling operations for large-scale firm would contract with the small producers to can or bottle their product. Meanwhile, the cost of high volume bottling and canning equipment is such that it's unlikely that any contract canning or bottling firms are available nearby for handling small-scale runs.

But if you can put the equipment for bottling or canning beer on a truck, you can make it possible to grow a craft brewers' business - providing the small-scale service they need to be able to grow beyond the hand-bottling phase. They come to you, where you and your production equipment are, and make it possible for your facility to produce more than it could without a major capital investment.

That's something that wouldn't necessarily be limited to canning or bottling - we think that many packaging operations could be done this way, not to mention a wide variety of other manufacturing or production operations that can be done on a small scale (after all, the entire production facility would be based on a truck!) And really, the only small scale production or operation that couldn't be produced on mobile platforms are things that require high levels of precision, where it would be necessary to anchor equipment to a large vibration-isolated fixed mass to provide the necessary stability to support the production.

We think the economics of the mobile factory business would be very similar to that for food trucks - with many of the same advantages and disadvantages as their fixed, larger competition.

Some of those advantages would be more unique to different kinds of production. For example, if the only thing preventing a particular activity from taking place in a certain area is a local ordinance or regulation, and all it takes to make it economically feasible, not to mention perfectly legal, is to do it on the other side of a city, county or state line, a mobile factory might be a whole lot more cost effective than the cross-country transportation operation that might otherwise be required to reach a fixed-base facility where the job can be done.

On the other hand, suppose the operators of the mobile factories were more like pirates, who wheel in for a job that might not be permitted where its being done, who then drive off as quickly as its done?

When most people think of smugglers, we're pretty sure they think that they only smuggle goods, like cigarettes, or other illicit and highly regulated things. Who's to say that production can't someday be smuggled in just the same way? Or that it isn't already?