See if you can tell from the following chart exactly when Federal Reserve Chairman Ben Bernanke spooked the more timid among Wall Street's professional traders by moving the goalposts closer for ending QE 4.0, the Fed's purchases of up to $45 billion per month in U.S. Treasuries, which it began on 12 December 2012: 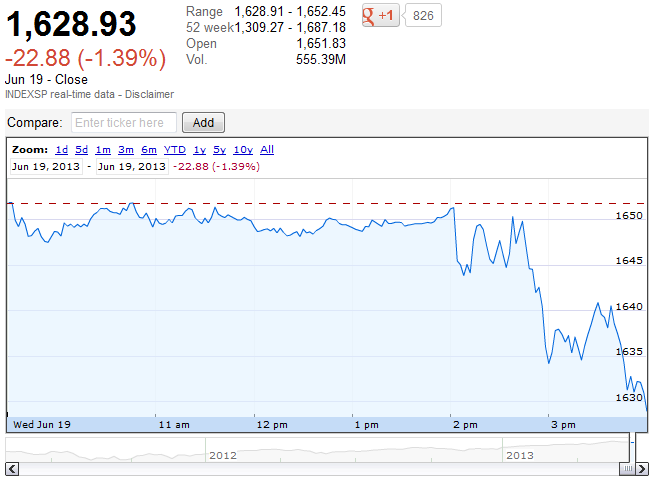 For the sake of keeping ourselves interested, we'll present the rest of our analysis in Q&A format....

What time did stock prices start crashing on 19 June 2013?

How long does it take investors in the stock market to react to news they weren't expecting?

About two to four minutes.

When then did an unexpected news event occur to which investors negatively reacted?

What was going on during that time that might have drawn the attention of investors?

What might Bernanke have said within that small window of time to cause such a reaction?

Via the New York Times' live blog of the event:

Wow. The Fed now has an unemployment rate target for asset purchases: 7 percent.

Returning to the New York Times' live blog of the event:

For what might be the first time, Ben S. Bernanke has made policy news at a news conference.

Mr. Bernanke announced an unemployment-rate target at which it might start to taper its asset purchases: 7 percent. Judging by the Fed's own projections, that would mean the taper would be coming toward the end of this year.

The purpose of the announcement is to reduce confusion, it seems. "It was thought it might be best for me to explain that," Mr. Bernanke said at the news conference.

Was this an accident?

Of course not. Bernanke's comments indicate that the Fed's Open Market Committee wanted it known that the Fed was moving the goalposts for triggering the tapering of QE 4.0. That is something that is projected to happen before the end of this year, which means that the Fed will start tapering off its QE 4.0 Treasury purchases much sooner than what investors had previously been told to expect.

Could this be a huge mistake? 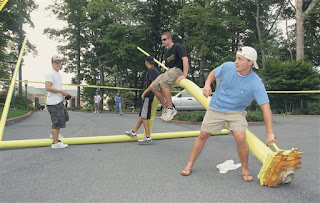 Possibly. If by shifting the goalposts for triggering the tapering of QE 4.0 up in time to be earlier than what was previously expected, Bernanke's press conference comments could very well force investors to shift their attention to an earlier point in time in setting their expectations for stock prices.

Although investors have been focused on 2014-Q1 since early May 2013 in setting recent stock prices, if investors were to reset their focus earlier to 2013-Q4, for example, the S&P 500 would drop in value somewhere on the order of 45 to 50%, which is the big risk that we've been concerned about for some time.

That outcome would be universally perceived by all observers to be an indication that the Fed's decision to push up the timetable for beginning to taper off its QE 4.0 program was a huge mistake.

How likely is that?

It appears that the Fed expects that the unemployment rate will fall to their new 7% goalpost sometime late in 2013. If investors give the Fed a lot of credibility on that projection, then it will happen.

QE 3.0 began on 13 September 2012, and consists of the Fed's purchases of $40 billion worth of mortgage-backed securities per month. From all indications, it appears this portion of the Fed's current quantitative easing programs will continue, indicating that the Fed cares a great deal about continuing its efforts to boost the U.S. housing industry, and house prices, at this time.

Does the Fed care about Wall Street's professional investors?

The Fed secretly believes that they're a bunch of pansies.

What will the Fed do next?

What they said they would do. Doesn't Chairman Bernanke have your full attention now?

Where did that goalpost moving picture come from?