Nearly three months ago, just after the BEA released its third estimate of GDP for the fourth quarter of 2012, we gave the following odds in forecasting where GDP in the first quarter of 2013 would be recorded:

Using our modified-limo forecasting method, we would anticipate that real GDP in 2013-Q1 has the following odds of falling in the indicated ranges (all values are given in terms of constant 2005 U.S. dollars):

The midpoint of our target ranges is $13,724.5 billion. We note for reference that this would correspond to an annualized real growth rate of 1.7%. [We forecast GDP - not GDP growth rates, which are very susceptible to big swings with just small changes in actual GDP.]

We did one other thing as well in our forecast - we took the over, which means that we expected that GDP would be recorded to be above our midpoint value of $13,724.5 billion.

So how did we do?

Would you believe that we just about completely nailed it?

Not too shabby, especially because all we did was assume that GDP would grow at the same rate it averaged over the two preceding quarters!

Speaking of which, in now looking forward to where GDP will be recorded in 2013-Q2, well, we'll present our visual results, but we're not going to discuss them in detail, because they'll all be different by the time the data is actually reported! 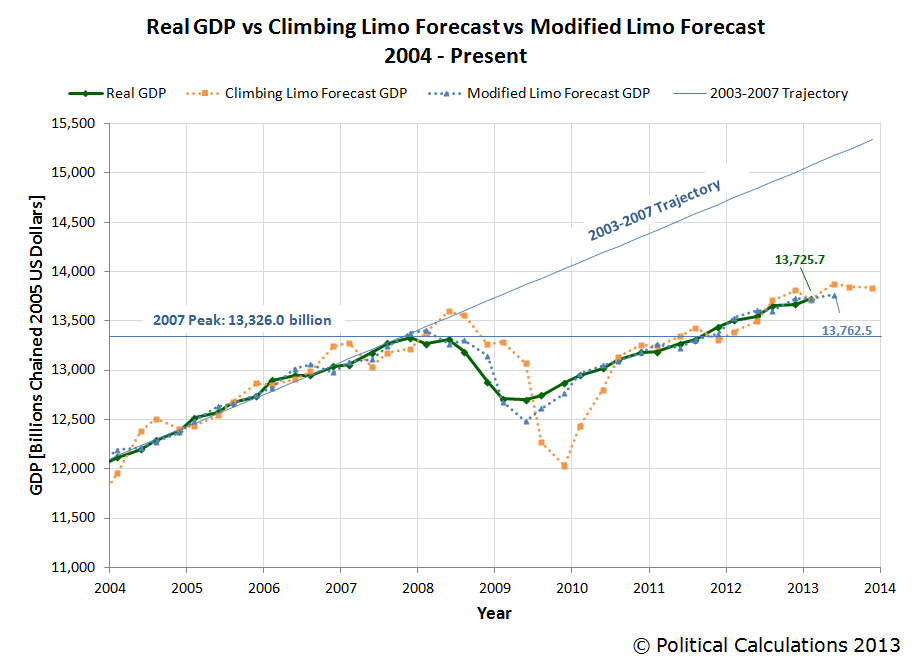 So we're going to hold off on officially forecasting where real GDP in 2013-Q2 will end up until we have the BEA's revised numbers. Because we'll have enough work later dealing with all the changes that will be part of the BEA's upcoming data revision!