Political Calculations
Unexpectedly Intriguing!
01 July 2013
The Fed Attempts to Walk It Back

Last week, we indicated how the Federal Reserve could avoid having a rout develop in the stock market (emphasis ours):

This analysis assumes that Bernanke's comments succeed in shifting the forward looking focus of investors to an earlier future, which would mark a shift in the expectations for the fundamentals driving the market. At this writing, it is too early to tell if such a fundamental shift has occurred, which is why we are presently classifying the market's reaction as a noise event. Depending upon how the Fed responds to the markets' reaction, it is still possible at this writing to arrest and reverse the decline in stock prices.

Now, we've gone into such basics in this article because we know that Federal Reserve Chairman Ben Bernanke and his successor are going to read it and might like to finally learn a little bit about how things like stock prices actually work. And then, maybe, do something that would shift the focus of investors back to the first quarter of 2014, in a way that ensures the Fed's credibility is not damaged.

So guess what other notable members of the Federal Reserve have been doing in the past week? Emphasis ours, again:

"A rise in short-term rates is very likely to be a long way off" even as it's possible that the central bank may slow the pace of its bond-buying program later this year, Federal Reserve Bank of New York President William Dudley said Thursday.

The official noted a shift in market rates that's happened since the last gathering of the monetary-policy-setting Federal Open Market Committee is seen by observers as signaling rate rises could come "much earlier than previously thought." Mr. Dudley, who is at the core of Fed monetary policy decision making, said "let me emphasize that such an expectation would be quite out of sync with both FOMC statements and the expectations of most FOMC participants."


Has it worked? When combined with the unexpectedly bad GDP revision for the first quarter of 2013, which confirmed slower than expected growth for the U.S. economy in 2013, Dudley's statement appears to have been successful in redirecting investors toward the expectation that any drawdown in the Fed's net acquisition rate of U.S. Treasuries is further off in the future than they had been led to expect from Ben Bernanke's original comments that created the potential crisis. Our chart below shows how the Bernanke Noise Event has evolved: 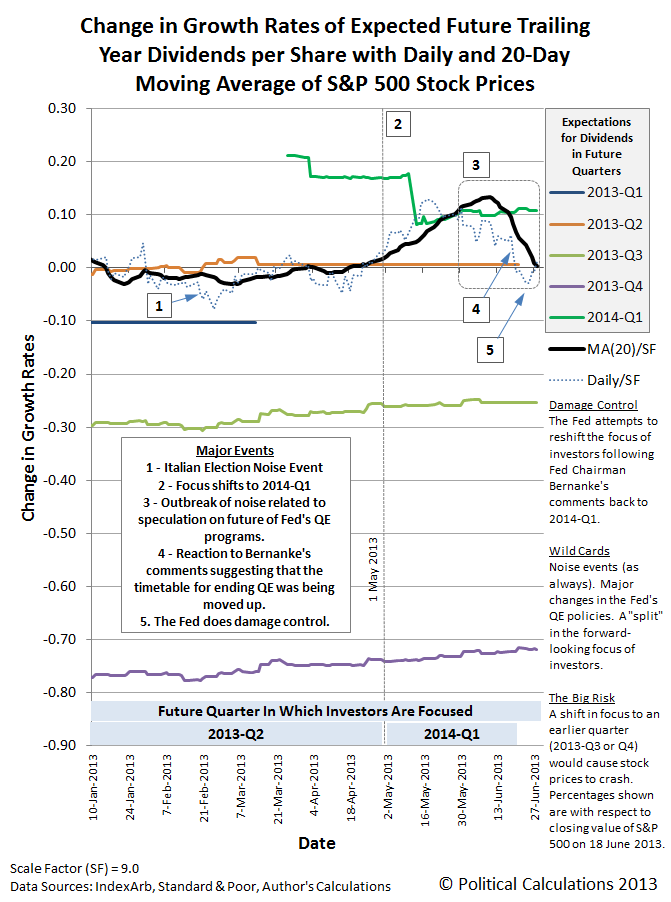 At this juncture, it appears that the Fed has initially succeeded in arresting the decline caused by Fed Chairman Bernanke's poorly considered press conference comments. Reversing it by fully redirecting investors to focus back upon the first quarter of 2014 will require additional effort on their part, and without that ongoing effort, we wonder if a sustained split in focus might not take hold in the market.

We might observe the effect of such a split in having the change in the growth rate of stock prices fall consistently between the levels defined by the expected changed in the growth rates of dividends per share in our chart above, rather than closely paralleling the level associated with a specific future quarter as they more typically would behave.

That outcome would represent a large percentage of investors having set their expectations in accordance with future quarters in 2013, while another large percentage of investors are setting their forward-looking focus back upon the first quarter of 2014, which was the near universal future point of focus prior to investors developing concerns about the future for the Fed's QE programs.

We'll next update this chart in two weeks to see how things played out.