Last week, we declared the end of the Bernanke Noise Event - that brief eruption of uncertainty that sent stock prices falling after some poorly chosen comments on the part of Fed Chairman Ben Bernanke regarding the timing of when the Fed would begin tapering off its direct injection of money into the U.S. economy. The Fed had spent the next several weeks doing damage control and had finally set things close to right (see chart below).

But then somebody at the White House, perhaps upset at seeing the impact that Bernanke and various members of the Fed had upon the markets with just their words, decided that they needed have their own negative noise event too. Which they would appear to have launched by floating a trial balloon proposing that Larry Summers, the former Obama economic adviser previously best known for sleeping through White House meetings, who is perhaps now becoming better known for apparently neither understanding nor believing in the kind of successful monetary policy that has been keeping the U.S. economy out of a full-fledged recession since September 2012, was President Obama's leading choice to replace Ben Bernanke after his term as Fed Chair ends in January 2014.

Our chart below tracks how investors have reacted to the news: 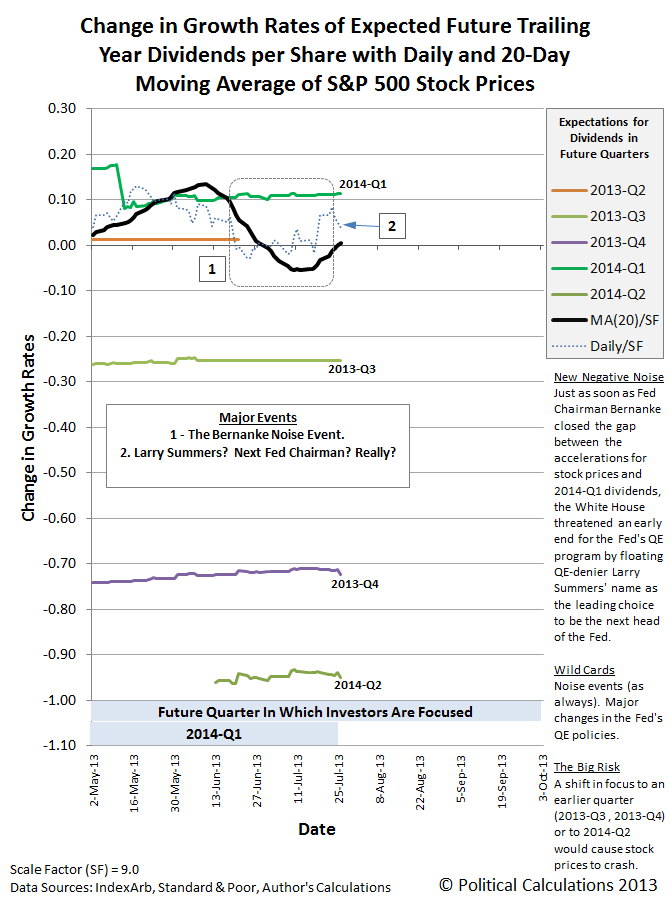 Instead, stock prices are tracking mostly sideways in response to the uncertainty provided by the White House's new negative noise event, which we see in the form of a negative impulse for the daily track of the acceleration of stock prices, as investors are reacting negatively to the prospect.

Just hope that the trial balloon pops. The alternative futures available for investors to focus upon aren't anywhere near as good as that described by the acceleration of dividends expected for 2014-Q1.

If you're just discovering our brand of analysis now, here's a good part of the electronic trail for how we got to this point! First up, the basic theory we've developed and where we get our data: