How has the distribution of the income for U.S. federal government employees changed since 2008?

We ask that question today, because we revisited the Smiths of Washington D.C. to see how much cash income that each person with "Smith" in their surname took home from their federal government job in 2011 [1].

Let's get right to it, shall we? Our chart below shows the cumulative distribution of cash income [2] for all non-postal U.S. federal government employees named "Smith" for 2011: 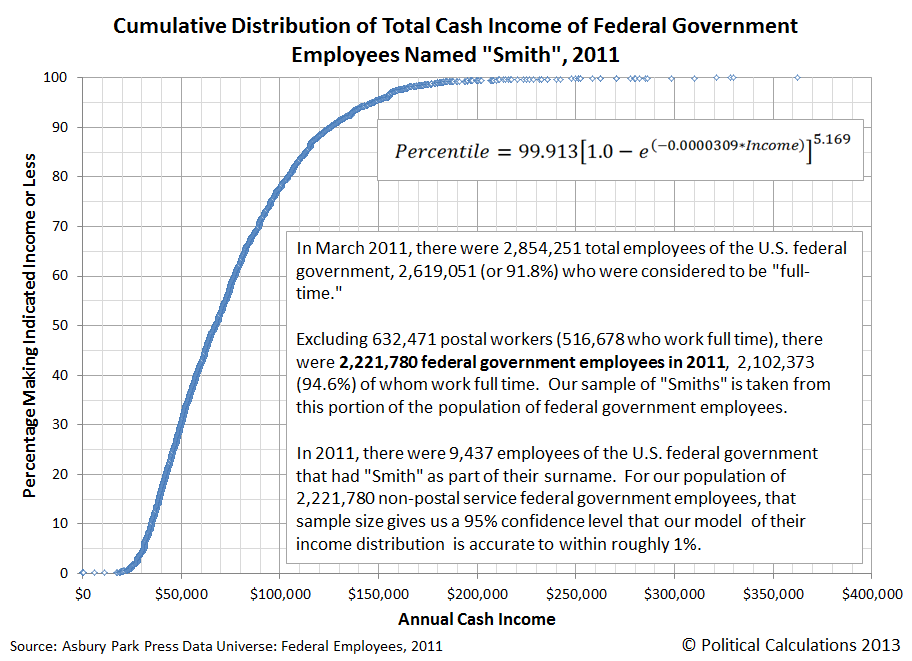 Now let's do some quick comparisons with 2008. The data for federal government employees excludes military and postal employees:

The following chart illustrates the percent increase in the incomes of the median and average U.S. civilian, non-postal federal government employee and U.S. individuals from 2008 to 2011: 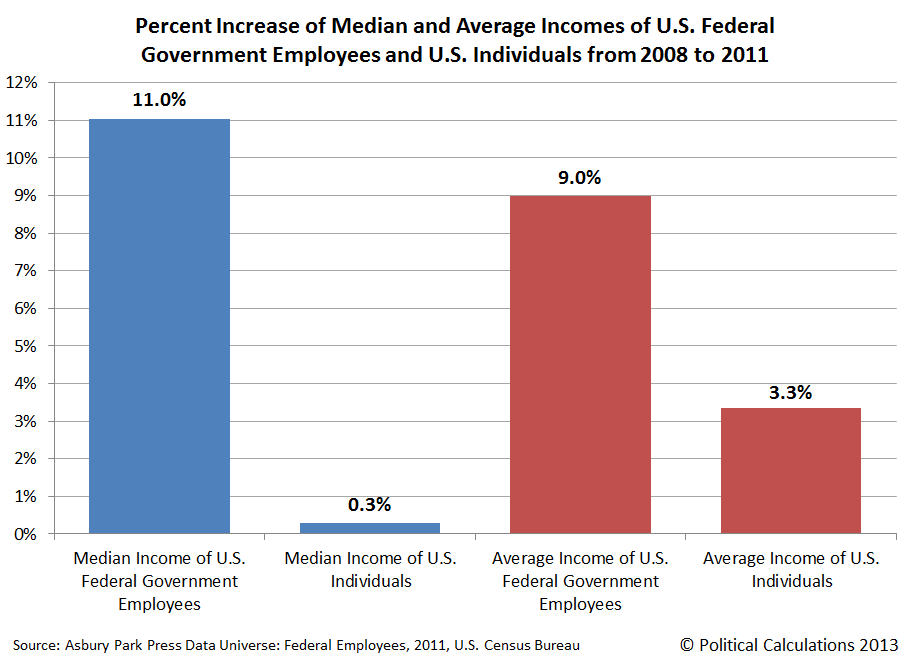 Next, we've built a quick tool where you can find the percentile ranking of your income among the U.S. federal government's employees. If you're reading this article on a site that republishes our RSS news feed, click here to access a working version of this tool at our site!

In the tool above, the results indicate the percentage of either U.S. individuals or U.S. federal government employees who earn either as much cash income as you do, or less. As a heads up, our model of the distribution of income for U.S. federal government employees is least accurate at the very lowest end of the income spectrum, where it may overstate the income percentile by as much as 2.5%. However, once the entered income reaches the tenth percentile, it is typically within 1% or less of the actual values over the rest of the income spectrum.

Our default data in the tool above is the median income earned by all U.S. individuals in 2011. 50% of Americans with income earn more than this amount, and 50% earn less.

In upcoming posts on this topic, we'll compare the U.S. federal government's non-postal, civilian workers to U.S. individuals who work full-time, all-year round.

[1] Why 2011? We plan to compare the income distribution of federal government employees with those of regular Americans, for which the most recent year that the U.S. Census Bureau makes the data available is 2011. The Census Bureau won't release the data for 2012 until sometime in September 2013.

[2] We combined each Smith's base pay with any additional "award" they were paid in 2011 to come up with their total cash income for the year.

[3] Joseph K. Smith, a Medical Officer employed with the Veterans Health Administration in Birmingham, Alabama took home a cash income of $362,448 in 2011 (salary only). Interestingly, the largest bonus paid to a "Smith" employed by the U.S. federal government in 2011 was paid to another Medical Officer working out of the same station, Phillip D. Smith, who pocketed an extra $19,425 on top of his regular annual pay of $258,267 in 2011.