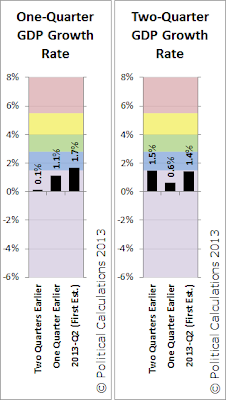 Now that the BEA has released its massive revision of GDP data going back to 1929, it's now worth our time and trouble to forecast where real GDP for 2013-Q2 will be finalized.

To do that, we'll be taking the data that the BEA has reported for the three most recent quarters for which it has finalized its estimates of the U.S.' real gross domestic product and applying our "modified limo" technique for forecasting the nation's GDP for the second quarter of 2013. While the BEA has already put forward an initial estimate of real GDP in 2013-Q2 of $15,648.7 billion in terms of chained 2009 U.S. dollars, that's really just their first estimate for the figure. What we're really looking to forecast is the value that will be recorded in the BEA's third estimate, which won't be reported sometime late in August 2013.

Since our modified limo method only incorporates finalized data in its formulation, and not initial estimates, the value of the first estimate that the BEA has already reported will neither affect nor alter our forecast value. If we had known how the BEA was going to revise GDP to incorporate the relatively intangible elements of the economy such as research and development activities in the private sector, we could have obtained the results we'll present today over a month ago, long before the BEA published its first estimate for real GDP in the second quarter of 2013.

That's because our modified limo forecasting technique is really an inertia-based method for projecting what real GDP will be in the future, which is based upon the very recent performance of the economy. It is most accurate when the economy is growing at a steady rate, at least, as measured over two-quarter long periods of time, and even provides insight in those cases when it is off target, as that indicates a situation where the economy is turning a corner, so to speak, either positively toward expansion or negatively toward contraction.

From that data, we find that the midpoint for our forecast range for real GDP in 2013-Q2 is $15,609.0 billion in terms of chained 2009 U.S. dollars, which is nearly $40 billion, or 0.25%, below the BEA's first estimate for the quarter, as the early indication that the U.S. economy performed slightly better in 2013-Q2 than a simple inertial trajectory would project.

We find the following probabilities for where GDP will be finalized for the quarter:

And of course, there is a 50% probability that it will be finalized at a value above our midpoint forecast value of $15,609.0 billion. And actually better than that, as the BEA's first estimate for the quarter indicates it is above that value.

The chart below visualizes our forecast, and gives the first hint of what 2013-Q3 might look like, if 2013-Q2's GDP is finalized at its currently estimated value of $15,648.7 billion: 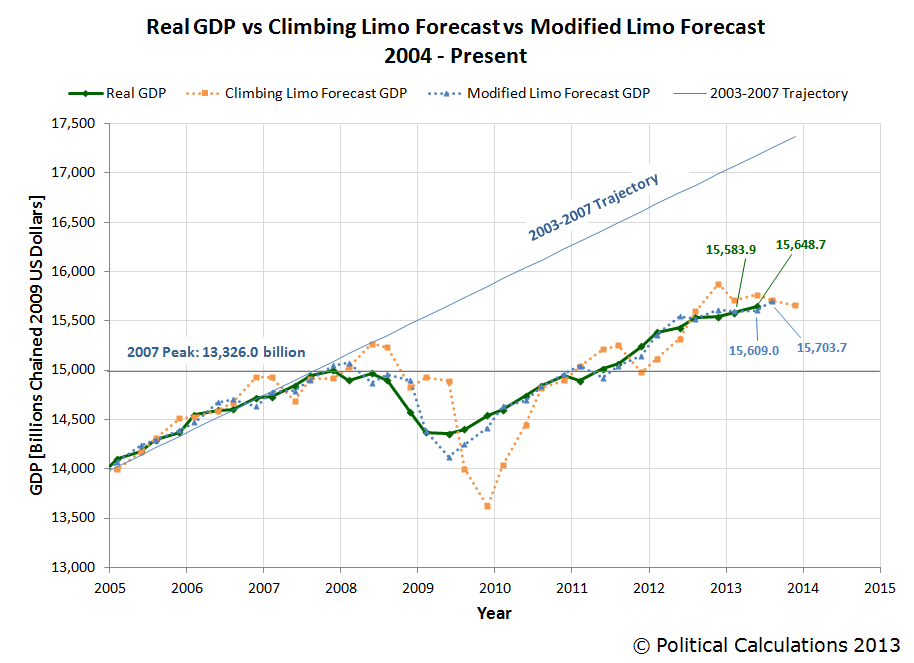 Although the early data favors real GDP being recorded above our forecast midpoint value, that's really not saying very much, as the overall level of economic growth suggests that the U.S. economy is experiencing recessionary conditions, and has been since the third quarter of 2012, as confirmed by our GDP growth rate temperature gauges shown at the top of this post!

But then, while that may be a surprise to people who believed the BEA's pre-revision estimates of GDP through 2013-Q1, which didn't indicate much potential of recession, it's old news to our readers, who know that we have other, more reliable methods than the federal government has for telling when the pace of economic growth has become too cold.