Since we last looked at the S&P 500's expected trailing twelve-month earnings per share some three months ago, the future for the S&P 500's forecast earnings has grown dim.

We can see that's the case in comparing our previous 17 May 2013 snapshot of the S&P 500's expected trailing year earnings per share for the fourth quarter of 2013 (2013-Q4, ending 31 December 2013) with our new snapshot just taken on 15 August 2013. To put the situation bluntly, the spike in optimism that investors had for a significantly brighter future in 2013 just three months ago has collapsed almost back to where it was six months ago. 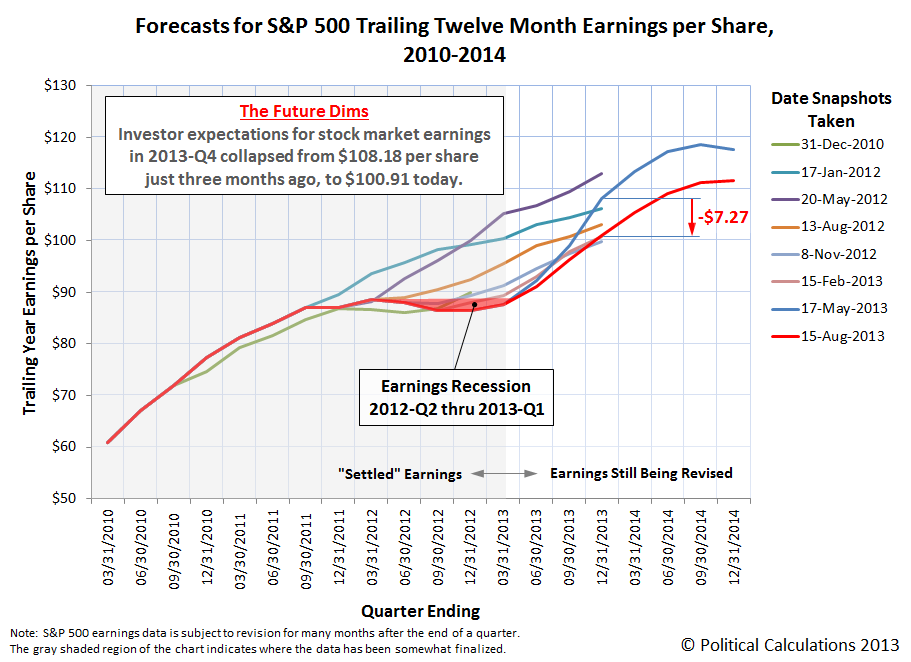 Here, we've been tracking the expectations for the fourth quarter of 2013. Looking at the trailing year earnings per share expected for 2013-Q4, we see that investors have decreased the level of earnings they expect to be reported for the S&P 500 in 2013 by $7.27 per share as compared to our previous snapshot that was taken just three months ago, with the new trailing twelve month figure now expected to be $100.91 per share.

What's more remarkable however is that the earnings per share data that was originally reported during that period did not indicate that situation. Our trailing twelve month earnings per share snapshots for 15 January 2012, 20 May 2012, and 13 August 2012 all indicated that earnings were rising during the early portion of this period of recession for stock market earnings.

It's not until our snapshot taken on 8 November 2012 that we see that the earlier earnings data had been revised enough to indicate a slow-to-no growth condition in the U.S. economy. Since then, our snapshots taken on 15 February 2013, 17 May 2013 and the newest on 15 August 2013 all confirm that earnings in the private sector of the U.S. economy actually contracted during these quarters.

By contrast, the number of publicly-traded companies acting to cut their dividends per share each month provided a near real-time confirmation of those recessionary conditions being present in the U.S. economy. Our most recent reading of that data indicates that the private sector of the U.S. economy is still experiencing recessionary conditions, but is perhaps finally beginning to exit from them.

But then, as we keep pointing out, dividends provide the clearest signal of the state of the private sector of the U.S. economy. It's just a bonus that they are also the fundamental driver of stock prices.