According to the carefully crafted plan of the Obama administration, there would be one million electric cars cruising around America's streets and highways by 2015. According to the plan, almost half of those vehicles would be Chevrolet Volts.

So how well are President Obama's industrial policy plans working out in the real world?

The easiest way to find out is to count up the number of Chevrolet Volt sales over time. Electric vehicle industry observer InsideEVs provides a monthly scorecard of the number of sales recorded for each primarily electricity-powered automobile in the U.S., from which we extracted the data for GM's Chevrolet Volt and visualized in the following chart: 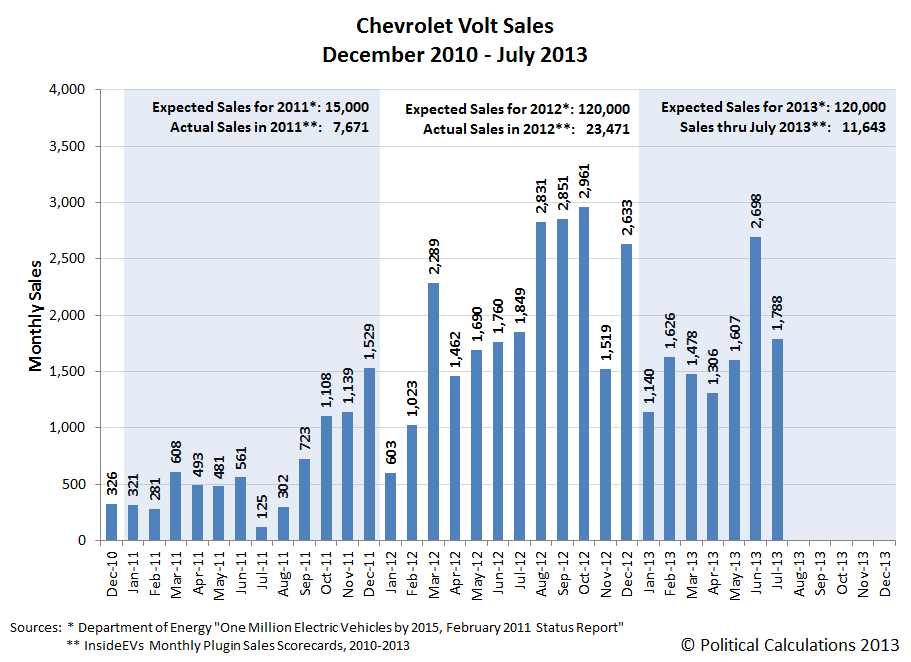 Through July 2013, we find that GM has sold a total of 43,111 Chevrolet Volts, which is about 161,889 vehicles short of the number that would need to be sold through this point of time to meet President Obama's planned sales total of 495,000 for these vehicles by 2015. That shortfall might help explain why GM has recently moved to mark down their recommended sale price for the Chevy Volt by $5,000.

Considering all of the primarily electricity-powered vehicles listed on InsideEVs monthly sales scorecard, through July 2013, some 117,788 electric vehicles have been sold in the United States. To reach President Obama's target of 1,000,000 electric automobiles sold by the end of 2015, some 882,212 more electric cars will have to be sold by December 2015.

That means that the number of sales of electric automobiles from August 2013 through December 2015 will have to average 30,421 per month between now and then. Through July 2013, the rolling twelve-month average for electric vehicle sales is 6,689 per month, a difference of 23,732 sales per month, which is about 78% below the average pace needed to hit President Obama's planned goal of having one million electric cars on the road by that time.

At present, the rolling twelve month average of Chevy Volt sales is nearly 80% below President Obama's planned average figure of 10,000 per month.

Put another way, there would appear to be an eighty percent difference between what President Obama promises and the reality of what he delivers.

And that would make Barack Obama the twenty percent President.

Update 16 August 2013: Writing at Innocent Bystanders, Geoff notes that we should have included one more graph in our analysis, which he has been kind enough to create: a comparison of President Obama's projected cumulative number of Chevy Volts that were supposed to be sold, and harsh reality: