Last week provided a pretty neat example of how changing expectations of dividends that will be paid in the future cause today's stock prices to change in response.

Our first chart shows how the expectations for the equivalent amount of dividends per share for the S&P 500 that are expected to be paid out in the first quarter of 2014 changed from Friday, 23 August 2013 through Wednesday, 4 September 2013 (when we created the following chart), along with the change in the closing value of the S&P 500 index on each day: 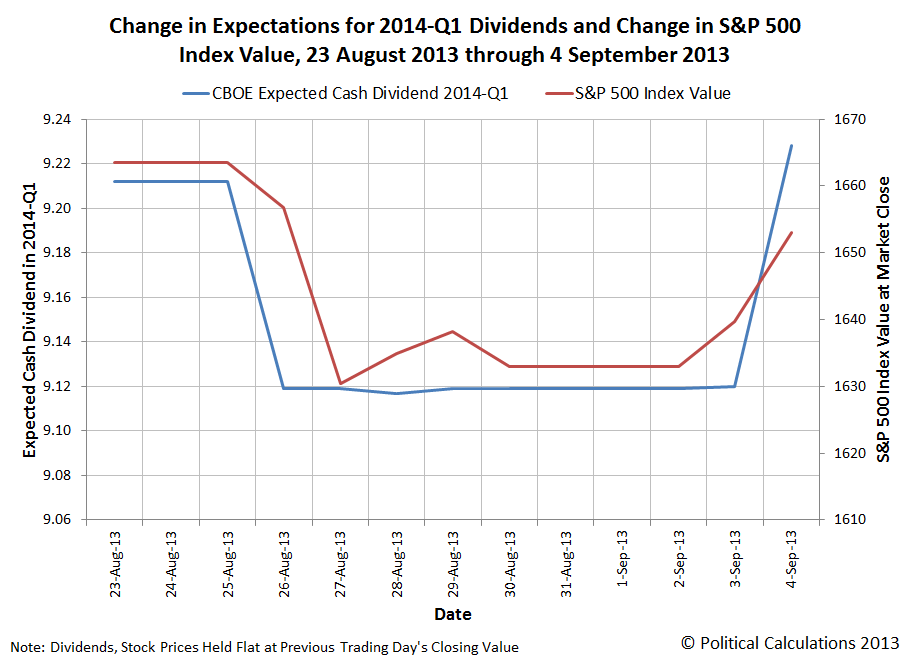 The scaling was automatically selected by Microsoft Excel when we created the chart - we haven't done anything to tweak it.

In looking at the chart, we see that the expectations for future dividends per share changed first on Monday, 26 August 2013, dropping by 11 cents per share, and was proportionately followed a day later by S&P 500 stock prices, which dropped by $33 per share. On Wednesday, 4 September 2013, we see that the expected dividends per share for the quarter suddenly jumped higher, as stock prices followed suit on the same day, but did not jump as high.

That's likely because of the effect of another set of expectations that is currently affecting stock prices. In addition to their fundamental driver of expected future dividends per share, stock prices today are also being greatly affected by investor expectations for the Federal Reserve's current program of quantitative easing.

Here, we observed last week that investors were effectively giving anywhere from a 62% to a 78% probability that the Fed will announce that it will begin purchasing fewer U.S. Treasuries and mortgage-backed securities before the end of the third quarter of 2013. (Note: we believe the actual probability is much closer to the high end of that range - the lower probability is given by one of our sources for expected future dividends per share that was set in place nearly three months ago.)

But when we did the same analysis this week for estimating that likely probability, which we by determining the percentage of the distance between the expectations for dividends are in the relevant future quarters are with respect to with the change in the growth rate of daily S&P 500 stock prices, we find that even though the future expectations for 2014-Q1 changed, investors maintained the nearly the exact same expectations for when the Fed might begin tapering its current QE programs: 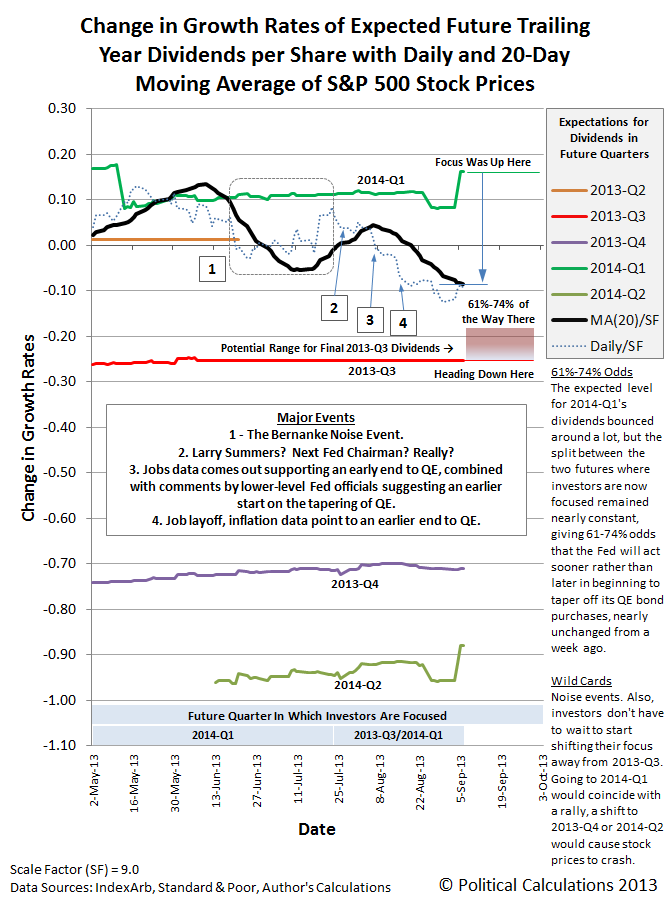 As a result, stock prices maintained the same relative position between the future expectations for dividends per share in 2013-Q3 and 2014-Q1, indicating a 61%-74% probability that the Fed will indeed begin tapering its QE program in 2013-Q3. (Note: We would still say that Schrödinger's Cat is three-quarters dead.)

So, while fundamental expectations of the future changed, expectations related to the Fed's QE program did not. The combination of these factors largely explains and accounts for how and why stock prices as measured by the S&P 500 have changed just as they have since 23 August 2013.