Has the inflation phase of the second U.S. housing bubble begun to peak? 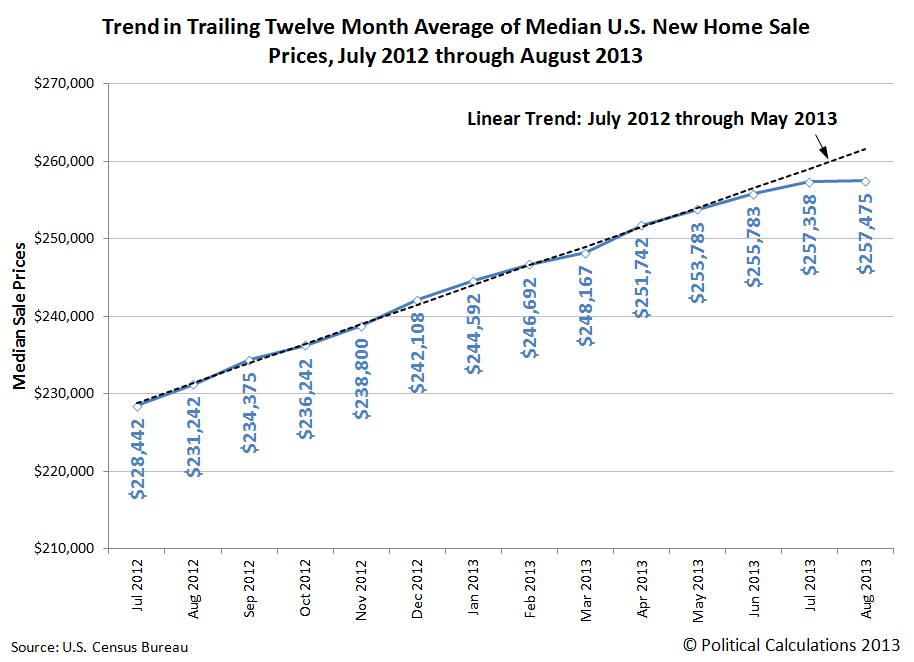 The chart above spans the period of time covering the inflation phase of the second U.S. housing bubble, which began after July 2012 and continues through the present. In the chart, we observe that the trailing twelve month average of median new home sale prices, which we calculate to minimize the effect of seasonality in the U.S. real estate market, was growing at a linear rate in the months from July 2012 through May 2013. After that month however, the growth rate of median housing prices has begun to decelerate, which we observe in the increasing deviation of newer median home sale prices from their previous trend.

What could have caused such a change in trajectory after May 2013?

Keeping in mind that it takes three factors to ignite a housing bubble: fuel, oxidizer and a spark (these links will take you to our three part series on the origin of the first U.S. housing bubble), we find that what changed after May 2013 is the bubble's fuel supply - interest rates!

Here, talk of the Fed's potential tapering of its current quantitative easing programs prompted a surge in the 10-Year U.S. Treasury, which given the well-established connection between the two, has prompted a surge in U.S. mortgage rates. Using data from the Fed, the first chart (on the left) below shows how they've changed during the period of the second housing bubble (July 2012 through August 2013), while the second chart (on the right) shows how they've changed since the so-called "Great Recession" ended in June 2009:

The relatively sudden escalation of U.S. interest rates is having the effect of starving a fire of fuel - it is putting the brakes on what had been the rapid rise of U.S. home prices, as it appears that the second U.S. housing bubble is now beginning to peak.

What that outcome indicates is that the Fed's policy with respect to interest rates can indeed affect whether or not the U.S. housing market can experience the conditions of an economic bubble. Far from being the result of factors far beyond its control, we find that a sustained housing bubble can only exist if the Fed desires one to exist, as it clearly has the ability to influence the pace at which it might inflate through its ability to influence U.S. interest rates.

That's not to say that the Federal Reserve can arbitrarily create such a bubble, as there are other factors that will determine if one can form in the first place, but the Fed most certainly has the ability to affect how long a bubble that has begun to inflate might be sustained through policies that push interest rates below their "natural" levels.

Let's next update our chart showing how median new home sale prices in the U.S. have changed since December 2000 with respect to median household incomes in the U.S.: 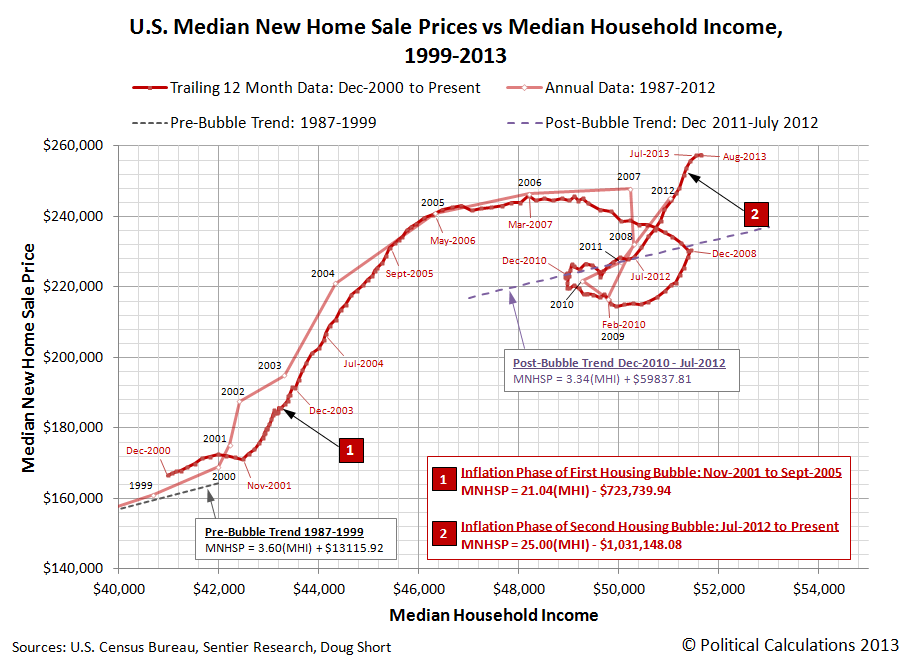 Pay close attention to the inflation phase of the first U.S. housing bubble in the chart above. It didn't begin to decelerate until September 2005, which is when the Fed finally had increased interest rates to approximately where they would be set by a Taylor Rule according to contemporary information available to the Fed, which might be considered to represent their natural, market-based level. That was the point at which the Fed began to effectively reduce the amount of fuel that it was feeding that particular fire. 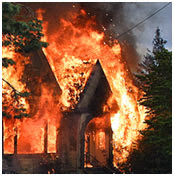 The same phenomenon would appear to be happening again today. Only now, instead of exercising direct control over interest rates, the Federal Reserve is exercising a more indirect influence through its quantitative easing programs, through its purchases of $45 billion per month in U.S. Treasuries and a little more directly through the QE program where it has been buying an average of $40 billion of agency-issued Mortgage Backed Securities (MBS), which it has been operating since September 2012.

That would be the point in time at which the Fed acted to push the interest rates that directly impact mortgages below the level that the market might otherwise have set them, succeeding in doing so through May 2013. We can see that influence in the U-shaped trajectory that U.S. mortgage rates followed after September 2012 up through May 2013. In the absence of the Fed's quantitative easing program, the trajectory of mortgage rates would have more closely followed a V-shaped pattern, corresponding to actual market conditions where real estate prices were rapidly escalating during this period of time.

In June 2013, the markets reacted to the unexpected news that the Fed might begin cutting back on its QE programs sooner than previously expected by putting both Treasury yields and mortgage rates much closer to where they would otherwise set them, as if the Fed already had taken that action. This is why U.S. mortgage rates shot upward so quickly.

Though not quite as the Fed might have planned, the impact of that sharp increase in mortgage rates upon the trajectory of median new home sale prices in the U.S. demonstrates that the Fed would have the ability to control the duration of an economic bubble if it chose to do so. We conclude then that like the first U.S. housing bubble, the second U.S. housing bubble is a desired outcome for the Fed in setting its monetary policies.

Given how things are playing out so far, it would seem then that economic history has a way of repeating itself, only faster and less impressively where the second U.S. housing bubble is concerned.

Yale's Robert Shiller, who is to modern financial theory today as Tycho Brahe was to the science of astronomy in the 1500s, is just now becoming concerned that the U.S. housing market may be entering into an economic bubble.

Meanwhile, Jason Zweig picks up on a similar behavioral finance-related "animal spirits" vibe in trying to explain that what we'll call "herd instincts" are responsible for why economic bubbles form.

Sigh. Such are the leading intellectual lights of this age. Stone knives and bearskins, indeed.

Sentier Research. Household Income Trends: July 2013. [PDF Document]. Accessed 26 September 2013. [Readers should note that we have converted all older inflation-adjusted values presented in this source to be in terms of their original, nominal values (a.k.a. "current U.S. dollars") for use in our charts, which means that we have a true apples-to-apples basis for pairing this data with the median new home sale price data reported by the U.S. Census Bureau.]