The title of our post today is a twist on the series of posts that Marginal Revolution's Tyler Cowen has featuring the pro-and-con arguments that the U.S. economy is experiencing stagnation today.

Only here, we're going to consider the evidence provided right at the center of your Thanksgiving holiday: the not-so-humble American farm-raised turkey! Our chart below shows the trends that have shaped the farm-raised turkey from 1970 through 2012: 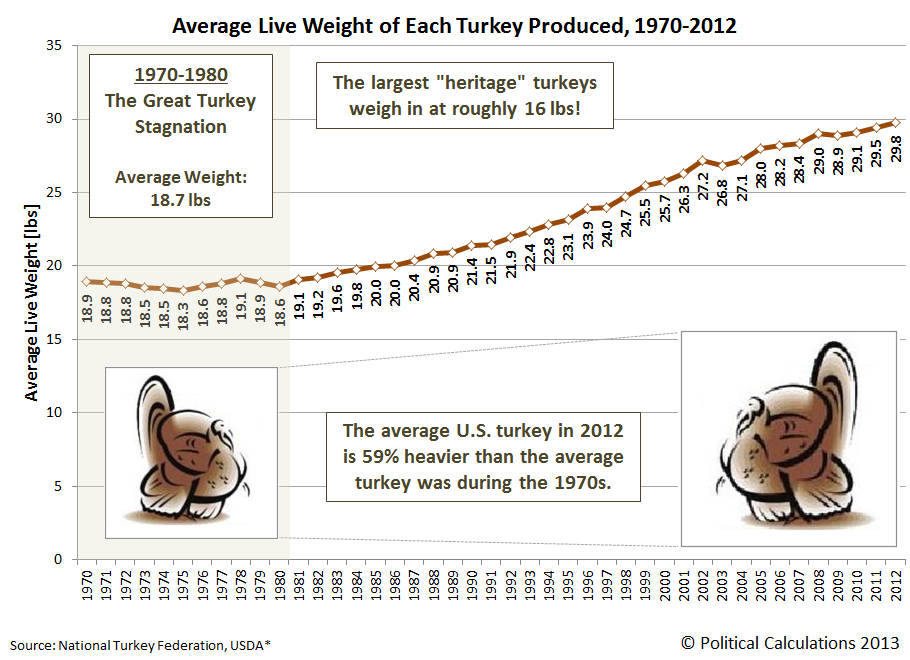 In the chart, we see that there has indeed been a Great Stagnation for turkeys raised in the U.S., which ran throughout the decade of the 1970s, at least as measured by their average live weight.

In terms of weight, today's turkeys are now 60% heavier than the average live weight of 18.7 pounds that was recorded by their forebearers in the stagnant '70s!

What that means, of course, is that today's turkey farmers are continuing to innovate ways of breeding larger birds, which allows them to bring more meat to market while raising fewer birds.

Now, we know what you're thinking - in breeding ever-bigger birds, today's turkey farmers have got to be pulling down some serious cha-ching! We'll look at how much money they're making per turkey in our next post (when this link goes live!)