We're afraid that we're going to have to rewrite the lyrics to The Mamas and The Papas classic song, "California Dreamin'":


The governor is Brown and the sky is gray.
I've been out of work on a winter's day.
I'd be safe and warm if I could get pay;
California schemin' on such a winter's day.

The reason for the rewrite of the song this season is the ongoing problems that the state of California is having in processing new applications for insurance benefits. Californians who have recently been forced into the marketplace for those benefits are being prevented from receiving them thanks to a large number of technical glitches that are plaguing the state Economic Development Department's brand new computer and telephone application system that was specifically built to handle them.

Oh, before we go on, we should clarify that we're not talking about California's Obamacare enrollment system, which is experiencing similar issues. Instead, we're talking about the state's unemployment insurance system, which is preventing Californians who have recently lost their jobs from being able to obtain the unemployment insurance benefits for which they and their former employers have already paid the premiums.

It would seem that finally, after weeks of silence in which they hoped that all the technical problems would be fixed so newly jobless Californians could enjoy their benefits and begin really boosting the state's economy, the state's elected lawmakers are finally becoming outraged at the state's bureaucrats' ongoing incompetence in fixing its broken system:

"This whole situation put a big black eye on how our constituents see the state of California," Assemblywoman Lorena Gonzalez, D-San Diego, told Employment Development Department officials at an Assembly Insurance Committee oversight hearing, the first on the troubled project.

A miscalculation converting old unemployment claims into a new processing system over the Labor Day weekend resulted in a massive backlog of unemployment claims. The problem became so severe it skewed reporting of initial jobless claims by the U.S. Department of Labor, and it provided another example of the state's information-technology shortcomings.

That, of course, is how we first learned of the situation, months before California's lawmakers were willing to pay attention to it. In the chart below, we see that aside from Hurricane Sandy, which was an actual natural disaster that severely disrupted the economies of states in the northeastern United States, virtually all of the extreme volatility in the data is originating in California. 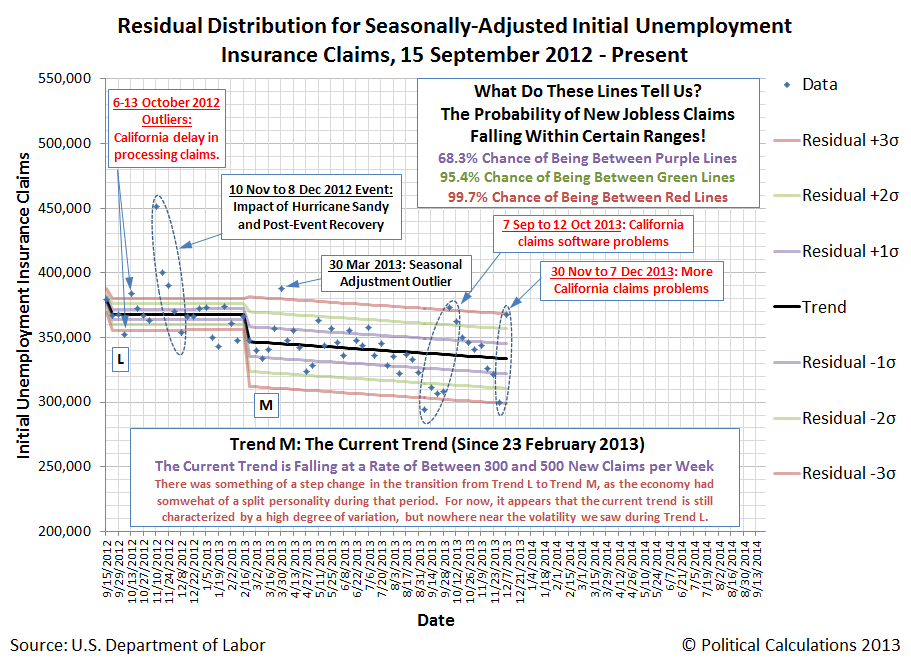 Meanwhile, California's lawmakers would appear to believe that their state's problems in processing new jobless benefit claims is creating something an image problem for the competence of the state's government, if the comments of California Assemblyman Ken Cooley, D-Rancho Cordova, are any indication:

"I think the fundamental issue for the state is we are the home of Silicon Valley, we are seen as the most technologically adept state in the nation. To have this sort of thing happening is a colossal problem."

No, really? Well, at least someone with a "D" behind their name thinks so!

After the problems first developed, the state's Economic Development Department (EDD) launched something of a technical surge to deal with backlog of claims created by the department's incompetence. Here's how things stand after nearly three months of that sustained effort:

While EDD administrators said backlog claims have largely been resolved, Irene Livingston, an employment program representative for EDD in San Jose, testified that it remains "nearly impossible" for unemployed California to reach front-line employees. She said the system is overwhelmed with telephone calls and an email system that remains backlogged.

"There's literally hundreds of thousands of messages that have yet to receive a response," she said.

Sound familiar? Now, how about this as we compare the rollout of California's new unemployment insurance application system with the train wreck rollout of Obamacare:

EDD administrators lamented staffing shortages at the department, but EDD Chief Deputy Director Sharon Hilliard told the committee that staffing levels were not responsible for the computer problem. The department greatly underestimated how many claimants would be affected by a glitch in data conversion done over the Labor Day weekend, as well as how long it would take employees to address the problem.

"For this, we are very sorry," Hilliard said.

Hilliard and a representative of Deloitte Consulting, the contractor on the project, both said the department should have done a more thorough test on the amount of time required to address "stop pay" flags associated with a portion of claims being converted.

Ready for another bizarre parallel with the Obamacare fiasco? Let's check in with the people with the greatest incentive to sign up for benefits. Here are the comments of Nicholas Lee, a 33-year old husband and father who lost his job back in September, who hasn't received any unemployment benefits or assistance from EDD officials, much less an unemployment benefits check, who has become very distressed that he hasn't been able to obtain any help despite his frequent calls and visits to the state's unemployment offices:

"I have two autistic kids, I have a wife, I have a house, and I am barely making it right now. And this system is not working.... I don't understand what they're doing, what's wrong, but maybe they should go back to the old system, because the old system was working."

Clearly, Mr. Lee is unaware that the old system was substandard, which is why that computer system needed to be replaced with a $35 million upgrade, because the state decided it really needed to enhance access to its unemployment insurance services.

And California is sparing no expense to deliver that $35 million upgrade for enhanced access to its unemployment insurance services, the bill for which now tops $188 million.

We should point out at this juncture that California Governor Jerry Brown's first response to this problem when it first hit critical mass back in September 2013 was to order the state's Economic Development Department to pay out unemployment insurance benefits to all applicants, without checking to confirm if they are even eligible to receive them. Which is something that is useful for fraudsters, if not actual people with legitimate claims like Nicholas Lee who are being left out in the cold.

Why, the parallels with Obamacare just keep stacking up like cordwood!...

But what we find fascinating are the parallels between the claims of improved performance after having the system break down, which are almost carbon copies of things that the Secretary of Health and Human Services, Kathleen Sebelius has been saying as the still-under-heavy-construction Healthcare.gov site continues to crash and burn. Here is EDD Chief Deputy Director Sharon Hilliard speaking before a state legislature committee:

"The system is working, and a majority of our customers are receiving benefits without interruption."

Except perhaps for those few, those unlucky few, that unfortunate band of brothers for whom California has failed to process even a single jobless benefit claim for week upon week. And since it only takes 50% plus 1 to make a majority, how few indeed are they? And why should any state government employee be concerned enough to set things right if that's where their administrators set the bar for their work?

Speaking of which, were any state government employees ever concerned that the implementation of the new unemployment benefits processing system was going to be such a total train wreck?

According to the Sacramento Bee, state government employee unions have begun circling their wagons and are suggesting that the department's managers dismissed the concerns of state employees about the project. Because why should unionized state government employees have to worry about serving the needs of distressed Californians who are laid off from their private sector jobs? Plus, it's not like they have any special connections to higher level state officials who might be able to address their concerns if they were really voiced before they became real problems now, is it?

Because if they did, that's another promise with an expiration date. And on such a winter's day!