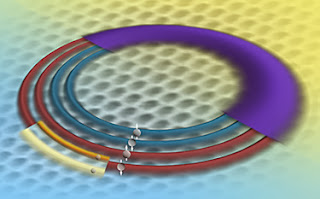 Stock prices are primarily driven by the expectations that investors have for the amount of money they can reasonably expect to earn through the shares of businesses that they own. Specifically, businesses that have raised money in the past to fund their growth by selling off portions of the ownership of the business to investors in return for a share of the profits that they expect to sustain in the future.

Consequently, what investors expect to earn through dividends at the specific times in the future at which they will be paid can have a profound effect on stock prices. If investors believe that they can earn a growing amount of dividends in the future by owning shares of these equity-financed businesses, they will bid up the price of the shares of ownership to buy them from their current owners, who might wish to pursue other opportunities with the funds they gain from selling their shares. And vice-versa for the opposite scenario, where the current owners might greatly wish to pursue other opportunities and need to entice other investors to buy the shares they want to sell by lowering their price.

Now that we've laid this basic groundwork for the fundamentals of what drives stock prices, let's get to the revolutionary.

That means that there are two fundamental ways in which stock prices can change. The first is pretty obvious: They can change as the amount of dividends expected to be paid in the future changes.

The second is not so obvious: Stock prices can change when investors shift their forward-looking focus from one point in the future to another, because different points of time can have very different expectations for the dividends that will be paid within them. When such a shift happens, stock prices would appear to behave similarly to how electrons within a hydrogen atom change their quantum energy levels or orbitals.

We're bringing this up today because that's exactly what has happened in the past week with the U.S. stock market. Our chart below, updated from the version we just posted on Monday, 27 January 2014, shows that investors have completed shifting their forward-looking focus from the fourth quarter of 2014 to instead focus on the second quarter (which we see as the shift from the medium blue data line for 2014-Q4 to the olive-green data line for 2014-Q2): 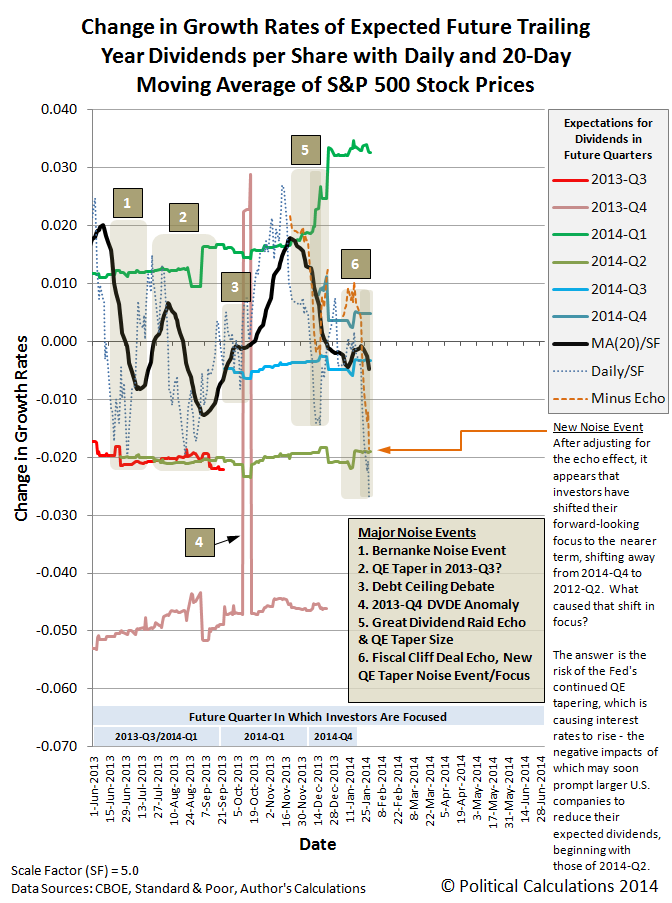 The driving factor behind this change is the Federal Reserve's tapering of its quantitative easing programs. While the Fed's action has long been expected in and of itself, what has changed for investor expectations is the news of the effect of the Fed's QE tapering, the first results of which began being reported after 22 January 2014.

Here, while the Fed had announced its intentions on 17 December 2013, it didn't actually implement the first reduction in its economy-stimulating quantitative easing bond-buying programs until January 2014.

After 22 January 2014, what wasn't previously known and became news is that very interest-rate sensitive businesses, especially in more heavily debt-financed developing nations, are being very negatively impacted by the Fed's tapering, which has put upward pressure on interest rates. Rising interest rates negatively impact debt-financed businesses because they increase their costs of doing business, which then puts negative pressure on their earnings.

For investors, the question then became one of where they should focus their forward-looking attention in making their investment decisions. If a considerable number of businesses might soon be seeing reduced earnings, with corresponding reductions in their expected dividend payments to their shareholders, it would make sense to focus more in the nearer term than a more distant future.

Since the earnings season for the first quarter of 2014 is nearly two-thirds over, it doesn't make much sense for investors to shift their focus to the current quarter, because the dividends that will be paid during it are largely locked in at this point.

But it would make sense to focus on the dividends that are expected to be paid in the second quarter, because that's where any impact to investors from falling earnings will first be indicated by businesses. Since 22 January 2014, it would appear that investors have been progressively shifting their focus to 2014-Q2.

Although it was unlikely going into 29 January 2014, there was still a small chance that the Fed might back off its QE tapering plans. That door slammed shut shortly after 2:00 PM Eastern Standard Time, and stock prices completed their quantum shift in future expectations to fully reflect the expectations associated with 2014-Q2 by the end of the trading day.

We're now going to push the limits of what we can do as analysts of the stock market. The following chart shows what investors can rationally expect for stock prices over the next month in the absence of any additional news that might shift their focus to a different point of time in the future or that might change the level of dividends expected for 2014-Q2, the quarter where they would now appear to have shifted their focus in making investment decisions (provided they keep their forward-looking focus on this quarter): 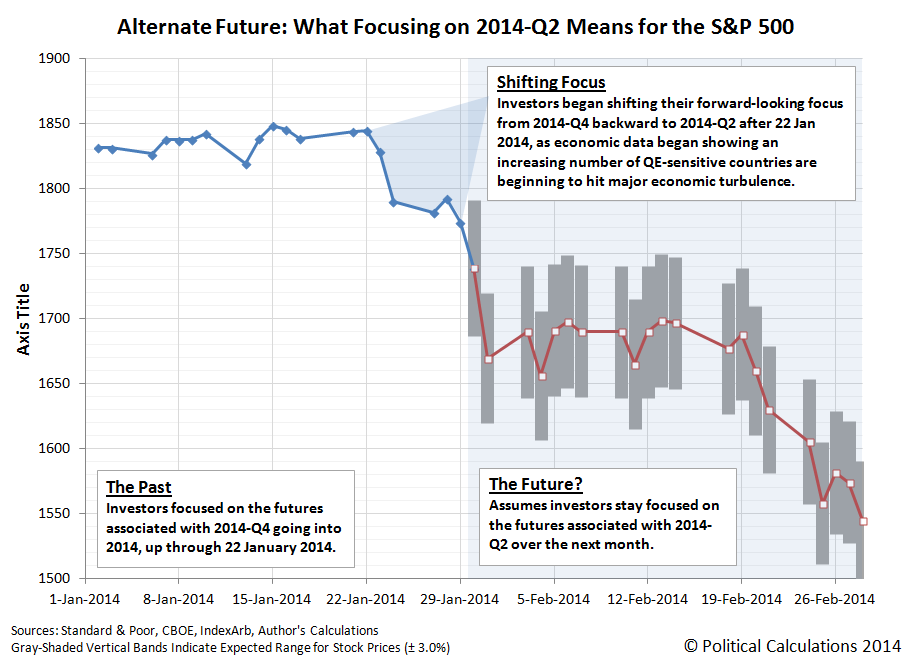 A third possibility going forward is that investors could react to some other news event, deviating stock prices from this basic trajectory - however, so long as investors remain focused on 2014-Q2, in the absence of bigger news to drive a shift in focus, stock prices should return to fall within our expected range, as all noise events end - it's only ever a question of when.

Finally, for the sake of covering all the bases, there's a fourth possibility: Instead of a shift in focus, what just happened with stock prices is really just its own noise event, which will itself end soon enough.

No matter what, there's some interesting and wonderfully chaotic forces at work in the markets - we couldn't be happier!